The rise and rise of Anna Bligh

oter satisfaction with Anna Bligh as measured by Newspoll has sunk considerably -- but what will it be now?

The fickle nature of political fortune. Voter satisfaction with Anna Bligh as measured by Newspoll has sunk considerably from the heady days of an approval rating above 60% that she had after succeeding Peter Beattie as Premier.

The pollster’s most recent assessment for the three months to December last year had her down to 24% satisfied and 67% dissatisfied with 9% uncommitted. 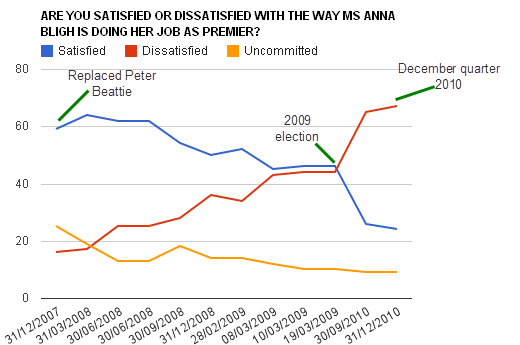 I wonder what the next reading will be for the quarter that ends in March? If the responders to a Fairfax National Times website straw poll that we report on The Stump is anything to go by, the figure will be remarkably higher.

Post you guesses for the January to March Newspoll figure in the comments section and I’ll collect them at the end of the day and reward the first correct entry received with a bg of First Dog goodies.

We are not alone: flood death toll reaches 400. The BBC News reported this morning:

Rescuers are trying to find survivors in cut-off areas …  hit by deadly floods that have left more than 400 people dead. Relatives have been joining in the search but often only find the bodies of loved ones. 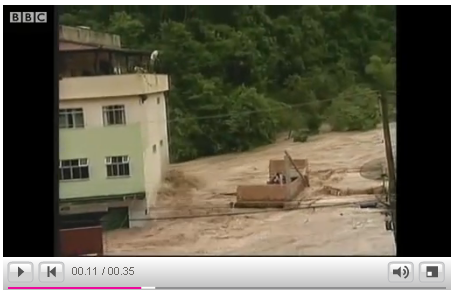 And these images from the country’s papers: 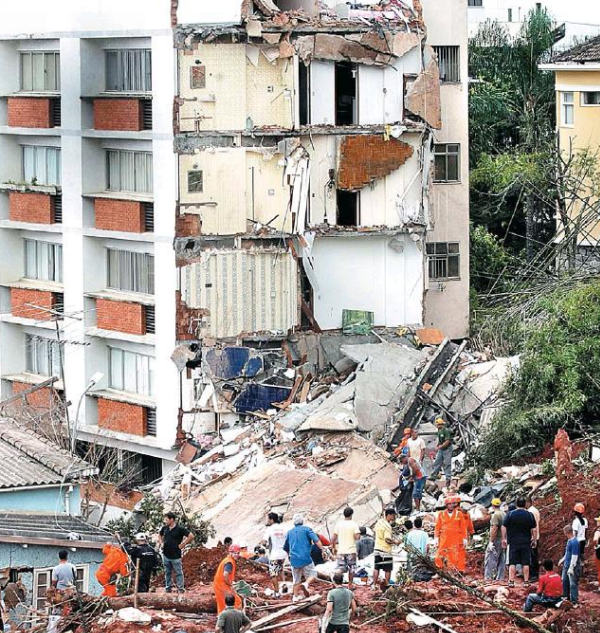 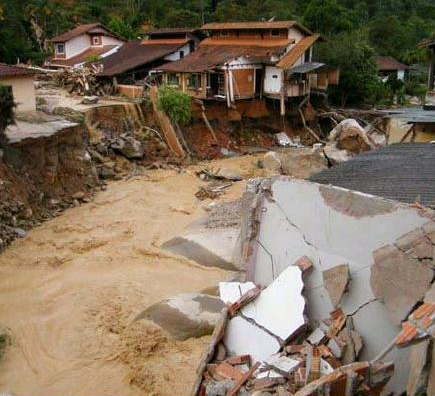 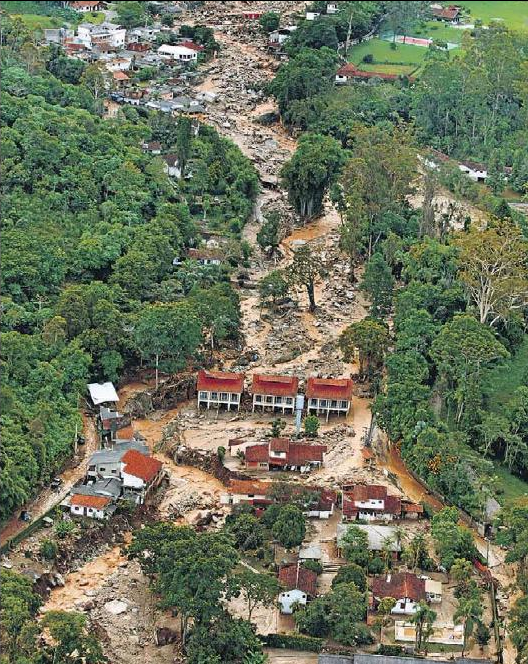 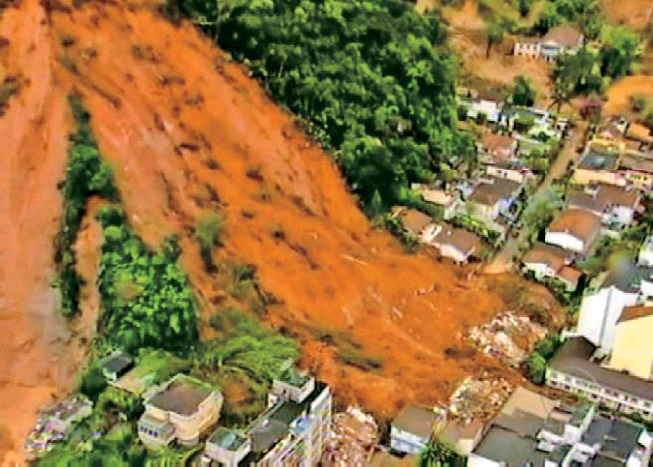 The BBC report on this Brazilian disaster says heavy rain has brought massive mudslides down on the towns of Nova Friburgo, Teresopolis and Petropolis.

Thousands have been made homeless. Darkness has fallen in the mountainous Serrana region, north of Rio de Janeiro, bringing a pause in the work of more than 800 rescue workers. Many have spent Thursday scrabbling with their bare hands through debris. In the Campo Grande area of Teresopolis, which was earlier cut off, rescuers found family members pulling bodies from the mud.

Just a little reminder that there is always someone worse off than yourself.

The world becomes less free. Freedom House, the international organisation set up in 1941 with Eleanor Roosevelt and Wendell Willkie as its first honorary co-chairpersons, finds that global freedom suffered its fifth consecutive year of decline in 2010. This represents the longest continuous period of decline in the nearly 40-year history of the survey. The year featured drops in the number of Free countries and the number of electoral democracies, as well as an overall deterioration for freedom in the Middle East and North Africa region.

A total of 25 countries showed significant declines in 2010, more than double the 11 countries exhibiting noteworthy gains. The number of countries designated as Free fell from 89 to 87, and the number of electoral democracies dropped to 115, far below the 2005 figure of 123. In addition, authoritarian regimes like those in China, Egypt, Iran, Russia, and Venezuela continued to step up repressive measures with little significant resistance from the democratic world. 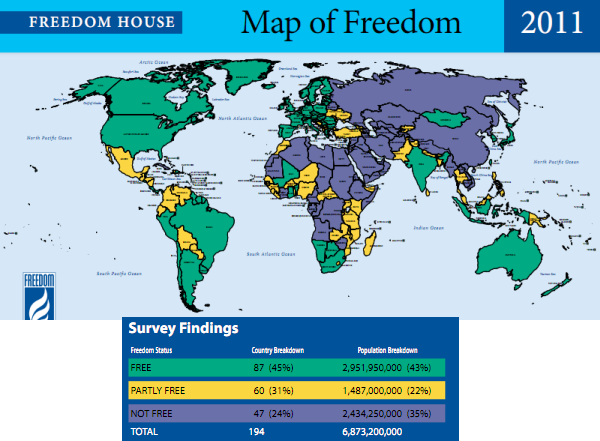 And Rupert keeps him on the payroll! In the United States, Jewish Funds for Justice (JFSJ), a charity that campaigns for social change, has delivered a petition with 10,000 signatures asking Fox New to remove talk show host Glenn Beck from its programs. Along with the petition was a list of 10 of Beck’s most egregious comments in 2010: 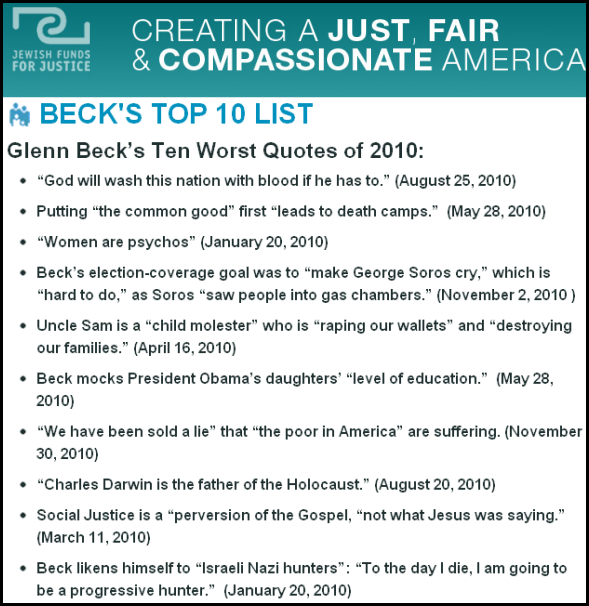 I wonder how outrageous you have to get to be removed from a News Corporation payroll?

After Bligh’s inspiring and committed leadership this week, and after her ‘remember we are Queenslanders’ speech (which made me want to be one) I’d join the queue saying her approvals will go up. On pure guesswork I’ll say she will be at 57% approval.

Now, how do we get her into a Federal seat?

Richard, have you seen the Global Peace Index and if so, what do you think of it?

It is funded by an Australian, Steve Killelea, via his philanthropic venture, The Charitable Foundation (Vision of Humanity and Institute for Economics and Peace).

Q: How outrageous do you have to get to be removed from a News Corporation payroll?

Question the integrity of (a) Murdoch or limit the profitability of News Corporation.

Queenslanders acknowledge that Bligh is doing very well but are suspicious of its political implications. As one Queensland friend wrote –

‘It has taken a flood of epic proportions to save Anna – slightly better than a war I guess…………….’.

By March there will be opposition to some aspect of the clean up and recovery or perhaps something else which will remind people why Bligh’s satisfaction rate was low before the flood, and what I guess is her current high satisfaction will fall again, altho not as low as it is now.