Crikey media wrap: The water hasn't finished receding and the cleanup has barely begun, but the blame game has already started. Brisbane Lord Mayor Campbell Newman is calling for an "open and transparent inquiry", run by the state, into the floods.

The water hasn’t finished receding and the clean-up has barely begun, but the blame game has already started. Brisbane Lord Mayor Campbell Newman is calling for an “open and transparent inquiry”, run by the state, into the floods along the lines of the 2009 Victorian bushfires royal commission. The premier’s office declined comment, but said it supported a “formal evaluation” of the floods once the crisis phase is over.

We need an in-depth inquiry into these floods to learn where we went wrong, declares Hedley Thomas in The Australian.

“It is imperative that our political leaders go the right way and call a far-reaching judicial inquiry into all the circumstances that contributed to the death toll and the billions of dollars of destruction.

“The people of Brisbane and every severely flooded community deserve to know the lessons that can be learned from the painful losses they are now bearing, and will continue to bear in the years it will take to rebuild and recover.”

Arguments about the untold benefits of dams are beginning. The Greens are to blame for no new dams being built in Australia, yet Karl Marx would have supported dams, argues Barry York in The Australian:

“In the Green quasi-religion, dams are evil, akin to a Satanic force. Thus, there must never be any big new dams built. Not ever. The Green policy is expressed at their website as a principle: “There should be no new large-scale dams on Australian rivers.

“Had the Greens been as influential in the second half of the 1970s as they have been since the mid-80s, it is unlikely that the Wivenhoe Dam, on the Brisbane River, 80km from Brisbane, would have been constructed.”

Has Brisbane forgot that it’s in a tropical climate with heavy rainfall, asks Anthony Funnell on The Drum?

“Until the 1980s it was rare to find a house in the inner-city that wasn’t elevated. But then several things occurred: the city’s population grew much larger and so did the houses. People began removing the stilts and building in underneath — new bedrooms, living spaces, etc.

“At the same time, the climate began to change. The Christmas/new year rainfall seemed not so heavy anymore and not so long. And then during the long drought of the mid-2000s, many people in Brisbane found it difficult to remember that the city had ever been sub-tropical at all, that heavy rain and flooding were part of its DNA.

“I remember just a few years ago a builder friend of mine saying that there was going to be trouble. That many of the houses were no longer being built to suit the Brisbane climate. That we’d all become so used to dry conditions that we’d forgotten to build for the wet.”

An editorial in The Australian gives the thumbs up to Queensland Premier Anna Bligh’s performance this week:

“It is too early to know whether the authorities could or should have done more to prepare for the deluge, but the good news is that a composed and practical premier looks competent to oversee the reconstruction.”

Technology — from social media, to military equipment — has been invaluable during these floods, but it will not stop disasters like this occuring, warned yesterday’s editorial in The Australian:

“We have become used to controlling our environment but it is not always possible to find a reason for tragedy or allocate blame. That does not remove the need to look at where processes have failed. Doubtless there have been mistakes; certainly we will find better ways to manage the landscape and protect householders. Ms Bligh said yesterday that when the worst was over, her government would look at whether the Wivenhoe dam can be upgraded to offer better flood mitigation. But she also pointed out that ‘dams do not stop floods’ — a reminder of the limits of technology.”

So far the 11 metre levees in Goondiwindi have held, despite 30 low-lying residents — including the nursing home and the hospital — being evacuated late yesterday. A peak of 10.85 metres is expected later this morning.

Around 25,000 residents remain in Brisbane’s western suburbs without power, running water or food, but essential supplies are expecting to be getting into those suburbs today. A fact sheet for residents returning to their flood-affected homes has been put together by Brisbane City Council, including advice on waste disposal, health issues with the water and being careful of snakes inside homes.

Supplies are finally getting through to Queensland’s Western Downs, but drinking water remains an issue in many flood-affected towns. There will be free public transport for those in south-east Queensland for the next week.

The death toll remains at 15 from these floods, with 61 still missing.

This video of Brisbane from a few days ago takes an incredible look through Brisbane’s flooded streets, meeting residents and checking out landmarks like the Regatta Hotel and the University of Queensland:

And a look to the front pages of newspapers around the country, noting that the floods still dominate. Click on the image to enlarge. 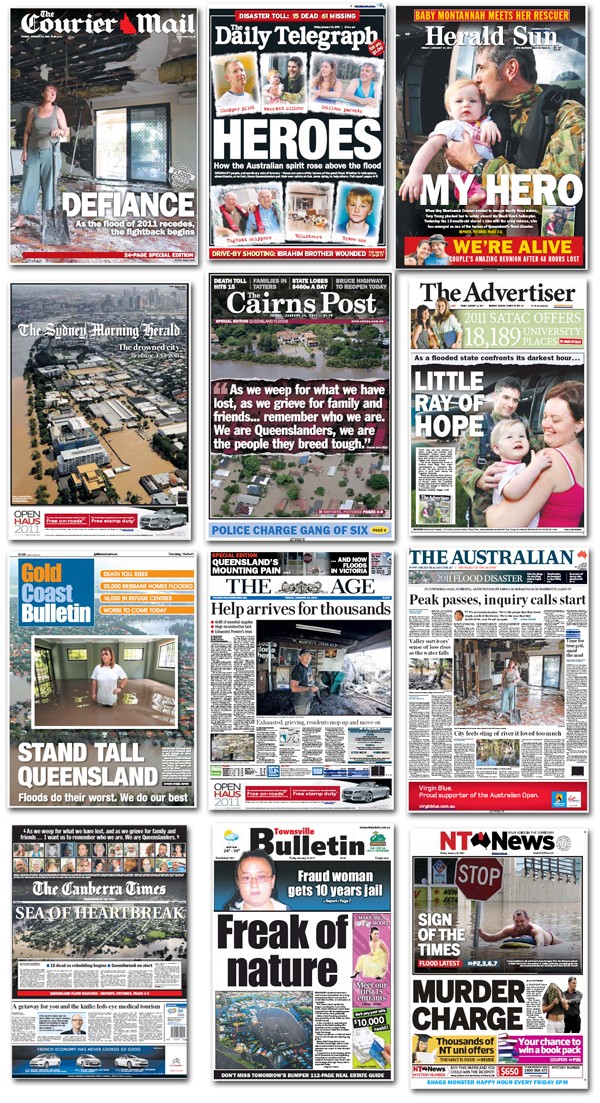 Holding back the floods: the difficulty of managing Wivenhoe

Nice round up. Thanks.

Hmm – when it’s a disaster everyone notices, when it’s a gradual change, no-one sees a thing. We really do live from headline to headline.

And Anna Bligh – not wishing to criticise her role as a public face to this disaster, but is she managing the response to the event, or is she the public relations manager reporting on the event?

The idea that the Greens are responsible for the lack of new dams in Australia is a bit of a myth. What killed off the idea of new dams in Australia in the ’80s was the arrival of economical rationalism. Unless a dam is for urban water supply it is very hard to work the numbers to make it look like a worthwhile purchase. This is conjunction with the fact that all of the prime dam sites already have a dam on them pretty much killed off the dam after 1989.

Heh – Davo101 – I never heard that line before, and it makes kinda good sense – look at the underinvestment of public infrastructure like Trains and Trams …

And as noted yesterday it was Barney bananas and the Nats. gloating about stopping the Traveston dam, although if that damn had been half built this flood would have been catastrophe on a whole other front with great slabs of earth washing down alongside concrete and building equipment.