What was with Channel Seven's coverage of Anna Bligh's Brisbane flood presser last night? Seven started with the Premier and a signer for the hearing impaired, only to zoom in on the Premier and completely cut the signer out of shot. Plus, other media news.

Silencing the flood signer. What was with Channel Seven’s coverage of Anna Bligh’s Brisbane flood presser last night? Seven started with the Premier and a signer for the hearing impaired, only to zoom in on the Premier and completely cut the signer out of shot.

How presenter Chris Bath kept a straight face when apologising for not showing the signer “due to technical reasons” at the end of the press conference was laughable. Seven chose not show the signer in a wide shot of the press conference, instead it opted to drop in a reel of the flood lowlights and devastation — probably much better TV for Seven. At least the ABC did the right thing for free-to-air viewers showing the Premier and the signer. — a Crikey reader

Yogurt war — “who will survive?”: Parts of flood-ravaged Queensland have been described as a war zone this week. In Bondi, there’s another important war being waged — between frozen yoghurt shops … 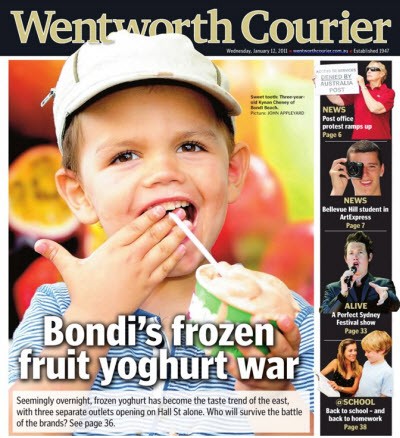 “Documents that could shed fresh light on allegations of phone hacking at the News of the World have been handed over by Scotland Yard to lawyers representing the football agent Sky Andrew. The Metropolitan police passed the files to Andrew’s legal team tonight to comply with a court order forcing it to make the information available.” — The Guardian

“Stop the presses — completely. The world’s first iPad newspaper, The Daily, is prepping for launch. Journalists have been hired and are in place at multiple US bureaus, including Los Angeles and New York.” — Associated Press

“The Daily Beast‘s Howard Kurtz added a whopper of a correction on Wednesday to a story he’d written nearly two months earlier, in late November. The correction? The man quoted throughout the piece wasn’t its purported subject, Congressman Darrell Issa, but his spokesman, whom Kurtz had not realised he was actually speaking to.” — The Huffington Post

“…WikiLeaks founder Julian Assange talks to John Pilger about Bradley Manning, his ‘insurance’ files on Rupert Murdoch and Newscorp — and which country is the real enemy of WikiLeaks. The ‘technological enemy’ of WikiLeaks is not the US — but China, according to Assange.” — New Statesman

Microsoft fights for right to app

“Microsoft is fighting Apple Inc’s attempt to trademark the term ‘app store’, saying it is a generic term used throughout the technology industry. Apple originally filed for the trademark in 2008, when the Cupertino, California-based consumer electronics giant launched its app store for the iPhone. Apple said at the time that the app store encompassed ‘retail store services featuring computer software provided via the internet and other computer and electronic communication networks’, among other things.” — The Wall Street Journal