In October, The Age posed a question: 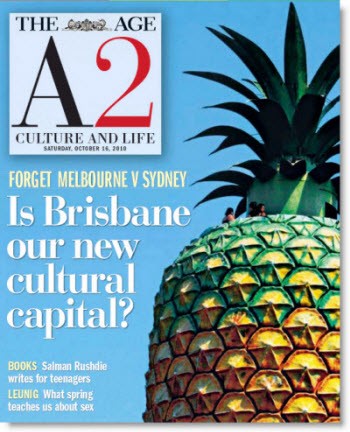 The gleaming new riverside art gallery it cited as a hallmark of Brisbane’s cultural awakening is flooded today. Just like the renovated State Library next door. And the adjacent performing arts centre, which has hosted numerous international shows since its overhaul in 2009.

Gallery head Tony Ellwood said of Brisbane at the time: “There’s a sense of continual improvement and optimism in every aspect of life. This is the land of hope.”

Noel Staunton, recently appointed artistic director of the Brisbane Festival, remarked: “Brisbane now has found its confidence. It no longer looks over its shoulder at Sydney or Melbourne but says: ‘We know who we are.'”

And not just because of its art spaces. The public transport system that Liberal mayor Campbell Newman largely constructed — including an extensive bus-dedicated network — is underwater and potentially in need of repairs. The super-charged catamarans that ply the river each day — critical public transport infrastructure as much as they are an icon of the River City — are berthed and broken; dozens of pontoons hurtling downstream. Services won’t resume for weeks, maybe months. The floating walkway that linked pedestrians and cyclists to the city and leafy New Farm has been destroyed and, perhaps given the controversy around the initial build, unlikely to be revived. New parks and public spaces are inundated and ruined.

This is, overwhelmingly, a human story. Accounting for its residents, recovering their lives, remains Queensland’s greatest challenge. And not just in the south-east corner, but across the vast expanses of the state, where some communities are experiencing the devastation for a second time. As Anna Bligh reassured regional residents in this morning’s press conference: “…we will keep the towns and cities of regional Queensland at the front of our radar, you will not be forgotten.” The tragedy is palpable.

But Queensland’s burgeoning, blossoming city of some 2 million people made something of itself over the past decade. It worked better. It was more exciting. More livable. It developed a soul.

Queenslanders are bred tough, an emotional premier reminded the world today. Its people will recover. Its capital, a fledgling city in so many ways, has come so far. There is now so much further to go.

On what basis is Brisbane Fledgling ….

Don’t want to get all political but Campbell Newman had zilch to do with the busway system. Not only was it well under construction/planning before he gained office but in any case it is a State government initiative. Granted it is a bit confusing because the buses using it are BCC owned and operated. But in a prize-winning piece of obstructionism the BCC delayed part of the project for years because it demanded $25M compensation from the State government for the car-parking under King George Square (where the main bus station is today)!

In fact, the week Newman first moved into office he removed the buslanes on several major roads. He is a typical Queenslander in that there is only one sense in which he supports the busway system: it keeps more of the roads for his precious car drivers.

[The floating walkway that linked pedestrians and cyclists to the city and leafy New Farm has been destroyed and, perhaps given the controversy around the initial build, unlikely to be revived. New parks and public spaces are inundated and ruined.]

First, the floating walkway is a critical link in the overall Rivewalk and it would be a travesty if it were not reconstructed. This is one of the great features of Brisbane now–you can walk/cycle/rollerblade from the University of Queensland right down to Newstead House at Breakfast Creek, probably about 20km. And even if its name was stolen from San Antonio, Texas, our Riverwalk is on a real living river (San Antonio’s went dry about 30 years ago due to excess extraction and is now a fake canal with pumps recirculating the water in the famous tourist shopping precinct!). I suppose they know now that it should have been removed and floated out to Moreton Bay a week ago!

Second, the parks are always flooded as most of them are parks because the land could not be allowed to be used for anything else. But they recover quickly and a fresh load of rich river silt will help them along! In the ’74 flood a lot of silt accumulated on the inside curve of river bends (which had been dredged over the century of settlement) and as mangroves quickly re-established themselves the city decided to retain some of them. The mangroves around City Botanic Gardens (there are timber walkways through them) is one such example. Alas they just removed some from the far end of Southbank, and destroyed some of the oldest and nicest timber restaurants and bars, to make way for a hideous concrete shopping affair.

I am sorry .. the public transport system that the Lord Mayor … largely constructed? … think you will find that the former administration did most if not all the ground work for the bus system way befor Mr Newman was elected…it may all have come to fruit during his administration but I would hardly credit him it all to him.

The only thing else the Banana-benders need to sort out once everything else is sorted out is fix the daylight saving issue. Only then can it be considered a serious contender against Sydney & Melbourne as a city that has shirked its Cinderella tag and has finally grown up.