Anne Cooper writes: Re. “‘Hardest times still ahead’: Queensland floods” (yesterday, item 1). Things are so depressing up here in Brisbane. Imagine the Yarra River flooding — pretty much the same. Richmond, CBD, MCG, Doncaster, Warrandyte — everywhere. That’s similar to our Brisbane River. We only just got the power back on this morning. Hope it stays that way. The house is high and dry, but 11,000 others in Brisbane’s suburbs and CBD are flooded. Energex has had to switch off power to stop sub-stations from blowing.  Sorry, you probably know all this from the media coverage.

So upset that the SES wont deploy us. If authorities and media knew that thousands of the local SES volunteers are sitting around BUSTING to help, and instead interstate and OS people are on the job, they would have a fit that we are not being used. I could scream. We are all so frustrated.

There’s no milk up here. No “D” size batteries left for radios and torches. The only vegetables left at supermarkets that I went to yesterday was celery. Not one loaf of bread. Apparently shelves were cleaned out by 10am yesterday morning. Paul’s Milk is flooded and not producing and a lot of produce from up north is stopped getting through because Bruce Highway has been cut. No flour either for the supermarket bakeries.

A Crikey reader writes: A few people are making the mistake that the biggest difference between ’74 and this week’s flood is the existence of Wivenhoe Dam. That’s the second biggest difference. The critical issue is that the amount of  water in the catchment/river is much bigger than ’74.

The premier quoted 2.5 million litres (think she meant 2.5 million megalitres) for this event compared to 1.5 million in ’74. That’s the real difference. If this was just a ’74 style weather event, we wouldn’t be having ’74 style flooding because Wivenhoe could cope.

I think it’s worth making the point because a lot of people think Wivenhoe hasn’t done its job. It has — very well. It’s just that this is an exceptional event — more extreme climatic conditions, anyone?

Beryce Nelson writes: Thanks for the great info on the floods – the message is finally getting through. Things have improved a little upstream but not much. Smaller towns and communities in Somerset Region, EG: Esk (badly flooded on the 11th) Toogoolawah ( low level flooding and cut off since the 9th) Somerset Dam township and Kilcoy (both flooded and cut off since the 8th) are still experiencing the consequences of the storms, flooding rains, damaged infrastructure and caring for hundreds of displaced people.

The Toogoolawah IGA supermarket shelves are now virtually empty and bread supplies had to be flown in by helicopter yesterday. More importantly, many of us still have family and/or friends missing in Toowoomba or the Lockyer Valley and/or have others facing the onslaught in Ipswich and Brisbane. We are all just so tired.

Attached are photographs of the normally flat and dry farmlands at the rear of my home in Toogoolawah. They were taken over three consecutive days of the same area and reveal how quickly and dangerously high the waters rose over that period. 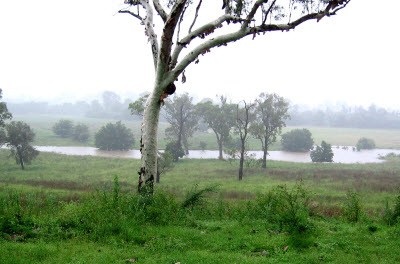 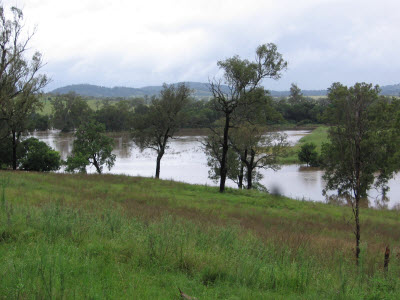 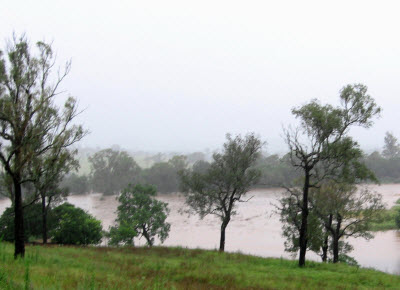 Keith Binns writes: I live in an area that doesn’t yet get digital TV and won’t for 18 months. We usually get five channels but have, courtesy of the Queensland floods, been reduced to three and occasionally two or one: SBS and channel 10 and the floods. SBS and the floods. The floods. I care about the floods. I’m not callous. I have friends there who I haven’t been able to contact because the phone lines are down. It’s a worry. The death toll is frightening. But I don’t want to watch endless videos of the same events while hearing similar commentary.

You can only watch cars being swept away a certain number of times before you lose interest. I’d rather watch a normal program (in my case it’s the tennis on channel 7) and have updates for five or ten minutes once an hour. But all I can watch is the floods. Normal programs have been shunted to the new digital channels which I can’t get. I’m running out of DVDs. (One also wonders at the urban planning in Brisbane after 1974 when new buildings were built on areas known to flood. Guess what? They’re flooding now. What a surprise!).

And the level of questioning by the press gallery already mentioned explains why the only nightly TV news commentary worth watching is The 7pm Project who does it with intelligence, humour and common sense. It will be sad when Packer and Murdoch inevitably ruin it.

Cameron Bray writes: Re. “Plenty of blame to go around in Arizona” (yesterday, item 14). That armed resistance is a legitimate response to tyrannical government is a massively important part of the American psyche. It is, after all, their founding myth.

When this is combined with the — far more recent — rightist conceit that citizens have an individual right to reject some or all government, you have a potentially powerful cocktail. When you add in the catalyst — the even more recent idea that liberal government is necessarily tyrannical, and either illegitimate or unpatriotic or both — then you have a really dangerous mix of ideas.

You can’t put this all together: that tyranny legitimates violence, that the individual has a right to resist tyranny and that the current government is by its nature illegitimate and tyrannical — and then claim no responsibility for what people do with that.

This is just too cute by half.

Tide of blame over QLD floods

To “A Crikey Reader”, I agree. Especially at New Farm-Teneriffe-Newstead we can thank Wivenhoe managers because the river has been pretty steady at about bank level. All the panic about this morning’s high tide just did not happen. I did a 10 km walk around this morning and the few areas that flooded are not those right on the river but the same old low spots that flood anytime there is heavy rain; when the river swells it forces back up the storm water drains that connect directly to the river. (Note: not to be confused with separate sewer system.) You can see it bubbling up in the streets; these spots are “inland” mini-lakes but I can testify, nothing like as bad as 1974.

I take your point about the much higher volumes the Brisbane basin has received however we should also distinguish that from the media exaggeration about rain in Brisbane itself. As I have said on several Crikey posts this week, in the month prior to the ’74 floods, the rain was hugely more intense and incessant than what we got this year. But local rain and storms only contribute to localized flash floods (the various creeks etc). What happens upstream in the basin is much more relevant.

The only quibble (which I am not going to make, this must be extremely tricky to manage) is whether they might have emptied Wivenhoe more aggressively earlier. It was already above 100% when the storm surges happened in the Lockyer valley. Now it stands at about 190%. On tuesday/wednesday they stopped outflows so as to minimize the effects of this morning’s high tide (it worked!) but they need to continue to empty it as much as possible to give them leeway to stop it again for each high-tide and especially in preparation for the king tide at Friday 21st Jan. It takes 36 h for water to travel from Wivenhoe to Brisbane city.

Keith Binns wrote:
[One also wonders at the urban planning in Brisbane after 1974 when new buildings were built on areas known to flood. Guess what? They’re flooding now. What a surprise!.]

The authorities have always made it difficult to get good accurate geographical elevation isoline contour maps. The reason? Well, I don’t think one has to be a paranoid conspiracy theorist to believe that it is a combination of politicians in the pockets of developers combined with the city planner’s imperative to densify and fill-in/redevelop brownfield sites. Many of these sites were never appropriate for certain kinds of development. Indeed it is why Southbank went undeveloped for 150 years–it remained a rather ugly swathe of low-rent low-rise light industry until its proximity and inner-city location eventually led to redevelopment after Expo88. It was of course one of the first areas to flood and I was rather irritated by the ignorant media going on about it so much; no one could have expected anything different.

In my own area of Teneriffe-Newstead it is again a swathe of previous brownfield sites (old tramway depot etc) that has been redeveloped just in the last 5 years or so. It was the one area I could not get to in my walk (see previous post) because streets were flooded (not v. deep, some cars were still plowing through) and indeed Anne Street, the main road to the airport, was blocked. But these streets were flooded by riverwater backing up the storm-water system (so yes, one wonders if being able to block those off at such times might not be wise; especially as it had stopped raining locally by the time the floodwater reached us). And all these places continue to place their critical control systems and electrical masterboards in their basements; in the CBD too!