Some good news on the employment front this morning in figures on Job Vacancies from the Australian Bureau of Statistics. Perhaps the biggest surprise is where the extra jobs are coming from.

Pen pushers needed more than miners. Some good news on the employment front this morning in figures on Job Vacancies from the Australian Bureau of Statistics. Total job vacancies in November 2010 were 190,200, an increase of 5.3% from August 2010. Vacancies in the private sector at 172,500 in November were up 5.5% from August with public sector vacancies growing 4% to 17,700.

Perhaps the biggest surprise is where the extra jobs are coming from. The figures below are in ‘000. 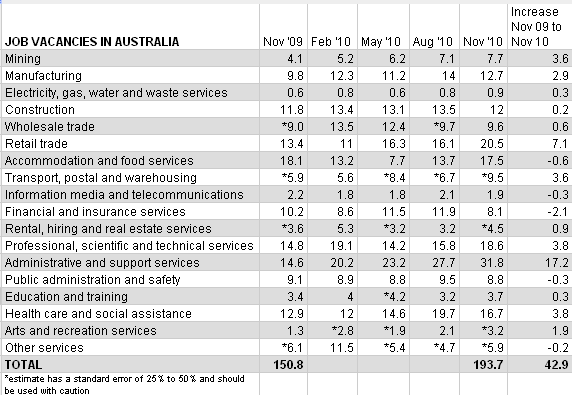 In the last year the number of vacancies in the mining industry has grown by by 3600, there are an additional 17,200 unfilled jobs for administrative and support staff.

Once again serious about news. Full marks to Channel Nine for treating the Queensland floods as an event worthy of disrupting normal programs last night to cover continuously. Its serious effort shamed the other networks.

Seven months of coalition talks and caretaker government. In Australia people got agitated when it took a few weeks to sort out a new government after an indecisive election. In Belgium they are still in the negotiating phase seven months after an election last June.

King Albert II of Belgium last night refused to accept the resignation of mediator Johan Vande Lanotte whom he appointed to end the country’s political crisis. Mr Vande Lanotte had worked for almost three months to reach a deal on forming a government but said he would step down after Flemish parties rejected it.

The BBC reports that Mr Vande Lanotte had agreed to resume his role although his original blueprint which was agreed by five of the seven political parties involved in negotiations had proposed further decentralisation of power to Belgium’s regions, split between the Dutch-speaking north and the French-speaking south.

A little Republican flavour. Just a few more examples of the language of politics in the United States. There are plenty more like them on the website of the Coalition to Stop Gun Violence. 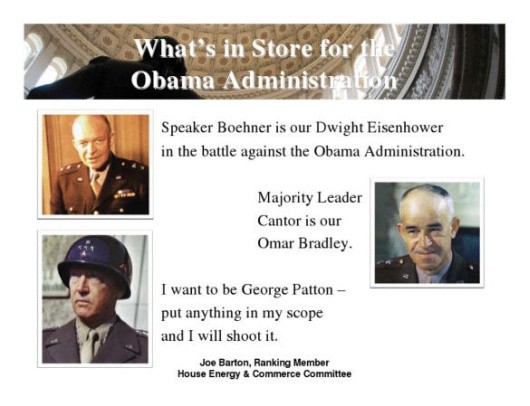 November 29, 2010: U.S. Rep. Joe Barton (R-TX), the ranking Republican on the House Energy and Commerce Committee, circulates a PowerPoint presentation to his colleagues in which he compares the Obama administration to the Nazi regime in Germany and likens himself to Gen. George Patton, bragging, “Put anything in my scope and I will shoot it.”

July 3, 2010: Joyce Kaufman, a conservative radio hosts on WFTL in Florida, tells a crowd of supporters at a Fort Lauderdale Tea Party event:

“I am convinced that the most important thing the Founding Fathers did to ensure me my First Amendments rights was they gave me a Second Amendment. And if ballots don’t work, bullets will. This is the standoff. When I say I’ll put my microphone down on November 2nd if we haven’t achieved substantial victory, I mean it. Because if at that point I’m going to up into the hills of Kentucky, I’m going to go out into the Midwest, I’m going to go up in the Vermont and New Hampshire outreaches and I’m going to gather together men and women who understand that some things are worth fighting for and some things are worth dying for.” 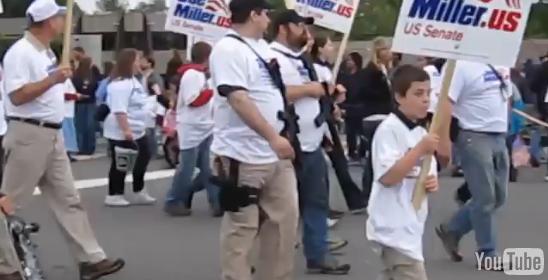 July 11, 2010: Supporters of Tea Party candidate Joe Miller openly carry assault rifles and handguns during a community parade in Eagle River and Chugiak, Alaska, while young children march alongside them. Miller, who is running against Senator Lisa Murkowski in the Republican primary, was endorsed by former Alaska governor Sarah Palin, who described him as a “true Commonsense Constitutional Conservative.”

October 21, 2010: Pastor Stephen Broden, the Republican candidate for U.S. Representative in Texas’ 30th Congressional District, tells WFAA-TV in Dallas that the violent overthrow of the government is an “option” that remains “on the table.” “Our nation was founded on violence,” states Broden. “I don’t think that we should ever remove anything from the table as it relates to our liberties and our freedoms.”

November 9, 2010: U.S. Representative-Elect Allen West of Florida’s 22nd Congressional District hires conservative radio talk show host Joyce Kaufman as his Chief of Staff. On July 3, Kaufman told a crowd of Tea Party supporters, “I am convinced that the most important thing the Founding Fathers did to ensure me my First Amendments rights was they gave me a Second Amendment. And if ballots don’t work, bullets will.”

“Barton”? Wasn’t he the same vacuous bozo that apologised – for the demeanour from the media and his congressional collegues – to BP at those hearings they had into the Gulf oil spill?