The big guns of breakfast TV were broadcasting throughout the morning. Plus, advertisements dry up in the Australian Financial Review, Oprah promotes Australia -- even under water and other media news.

Big guns anchor flood coverage. The big guns of breakfast TV were broadcasting throughout the morning, perched atop Kangaroo Point cliffs overlooking the Brisbane CBD and along the disappearing banks of the Brisbane River. Karl Stefanovic headed Nine’s coverage this morning (after broadcasting well into last night), while Melissa Doyle cut short her holidays to join Larry Emdur (that’s the former game show host who Nine now wants to poach to anchor its breakfast news) on an extended Sunrise. ABC1 has flicked the switch to Aunty’s 24-hour news station, with Joe O’Brien water-side in Brisbane.

Brisbane’s only daily paper The Courier Mail is headquartered at Bowen Hills, one of the inner-city suburbs expected to face flooding throughout the day. Its online rival, Fairfax’s Brisbane Times, has already moved out of its riverside office tower in the CBD and has journalists working in the field, at home and out of stablemate 4BC’s Cannon Hill studios. The ABC continues to work out of multiple offices while its new Southbank headquarters is built (the riverside construction site will go under today), with the all-important Local Radio studios in Toowong also in flood’s way. The station briefly lost phone services this morning and had to redirect listener calls.

Tonight, another big gun returns to TV screens — Leigh Sales will host an ABC News special at 8.30pm following local 7pm news bulletins and the Queensland news service networked nationally at 8pm (Queensland is an hour behind other eastern states). Aunty says it will provide an “off delay” feed so all states will see coverage as it happens. Commercial networks are also expected to continue their coverage into the night. — Jason Whittaker

Courier‘s Golf of flood coverage. As The Courier Mail reported the flood crisis yesterday, you’d think the advertising department might have delayed this obtrusive ad (at least the flooded cars weren’t VWs)… 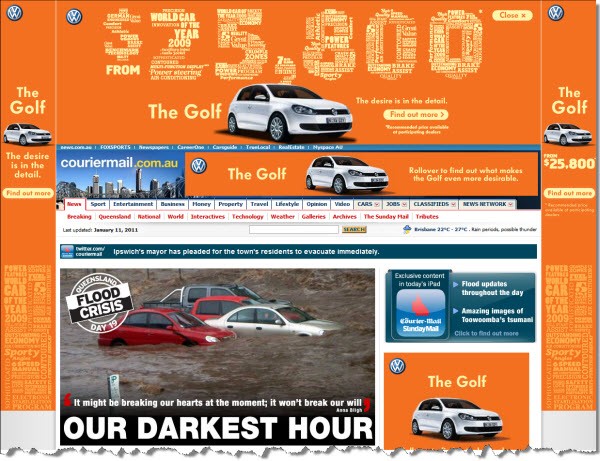 Bad business for The Fin. Four: that’s how many display advertisements appear in today’s edition of the Australian Financial Review. Throughout the entire 48-page tabloid. Porsche, HSBC, NAB and Grays Online certainly didn’t have much competition for eyeballs. As one Crikey reader noted: “I know it’s the silly season, but one has to wonder about the viability of the Fin Review …”

So how is The Australian, The Fin‘s national rival, faring? It still had 11 ads this morning — in its news section alone. The last circulation audit in November had The Australian selling 136,268 copies Monday to Friday (up 1.6% on the previous quarter), while The Fin fell an alarming 4.9% to just 79,201 copies across the country. The Fairfax business daily faces criticism for stopping the printers for days over Christmas and New Year’s Day — its bookings today give some clue as to why. — Jason Whittaker

“Private equity firm CVC has appointed Credit Suisse , Goldman Sachs and UBS to advise on the possible initial public offering of television network Nine Entertainment, a source said on Tuesday, in a deal that could be worth $5 billion.” — Reuters

Oprah promotes Australia — even under water

“It’s not the best time to advertise Australia as the ultimate holiday destination — what with most of Queensland under water. However, Oprah’s Ultimate Australian Adventure will be broadcast regardless of the national disaster, in the US next Tuesday through Friday.” — The Australian

“To Twitter’s credit, the company didn’t just open up its database, find the information the feds were seeking (such as the IP and e-mail addresses used by the targets) and quietly continue on with building new features. Instead the company successfully challenged the gag order in court, and then told the targets their data was being requested, giving them time to try and quash the order themselves.” — Wired

What will be in Rupert’s new iPad newspaper?

“If you listen close enough, you can almost hear it coming. Months of feverish speculation will reportedly come to an end next week when Rupert Murdoch lifts the curtain on his iPad-only news publication, The Daily.” — The Guardian

“MySpace boss Mike Jones has confirmed that the company is cutting around half of its global staff and signalled that the site’s Australian operation is likely to be dramatically scaled back with advertising sales and content management outsourced in what may mean just a skeleton operation remaining locally.” — mUmBRELLA

Bening pleads with print critic: can’t we all just get along?

Jason, any chance it may be the time of year? is it possible to look at the papers for Jan 2010 and see whether they’re similar mate before you right them off….by the way, it costs $3.00 a copy Jason, so maybe it’s not so reliant on ad revenue…bit like the Crikey model

Armond White is considered a troll among film critics – he even manages to sidestep Godwin’s law… http://www.avclub.com/articles/armond-white-debuts-live-version-of-his-contrarian,49901/#3233129

I stopped buying “The Fin” when Business Spectator first hit my inbox,it gives me all the info I need,in fact I doubt that I will ever buy another print newspaper of any type,online is the way to go for me,and a Crikey subscription is part of it.