The Chronicle gets through, as Toowoomba surveys carnage

On the first day of major flash flooding in Toowoomba the 89-year-old Toowoomba Chronicle was delivered as usual.

The news got through to Toowoomba residents with a backyard above water this morning — the 89-year-old Toowoomba Chronicle was delivered as usual. And while much of the town remains under water, the newsroom fully expects to have another edition out tomorrow.

“The paper’s out,” a newsroom staffer told Crikey this morning. “Some areas have been accessible by our home deliveries around town. Certainly in areas where there are flood restrictions we’re unable to access those towns. We’ve done our best under the circumstances, because a lot of our staff have been in areas where they’ve been unable to deliver those papers. 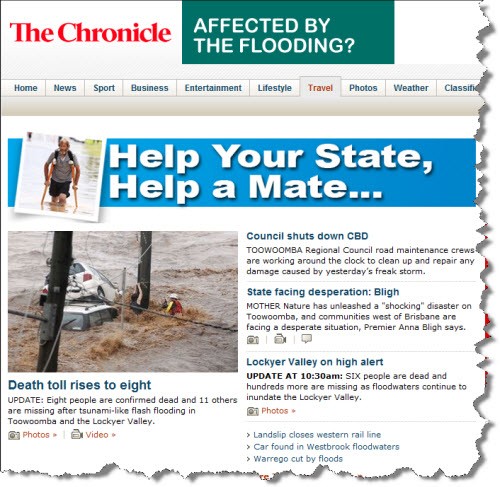 The stories from the town of roughly 130,000 residents, 130 kilometres west of Brisbane, are as dramatic as the footage playing on loop across TV networks. Alan Wallace works at BMS Mitre 10, in the main street of Toowoomba, and watched the water roll in.

“The water hit very hard and very quick,” he told Crikey via phone this morning. “It probably happened in a 10-minute period — it just built up at the back door a bit and proceeded to flood the entire top floor of the business and flooded down into the bottom floor of the business.

“But, you know, when you compare it to everyone else I think we got off pretty well to be quite honest. Probably stock wise we probably had a thousand dollars of material lost.

“I saw the piccies on Sunrise this morning, and I think we can consider ourselves pretty lucky. We’ve sandbagged again this morning, because they say another front is coming lunchtime so we’re sort of expecting something similar shortly.”

“We drove down after it all happened and we just seen the cars on their roofs. We took photos of a local car park here and there was three cars on top of each other all scattered, just piled up.”

Andrew Smith, a café owner on Margret Street in the city, describes an “absolutely torrential downpour”: “[The flood] went right through the CBD and took out a shopping centre, a number of food stores, went through a homeware store, there was chairs and tables and things floating around in the street as well. Half of the pub has fallen apart — a big brick wall.

“Most of the people we speak to out here are just fairly flat, is the best way to describe it. I’m just looking out the front here and shopkeepers are just standing out the front of their shops watching more rain and cloud and things roll in — I guess pretty much waiting to see what’s going to happen.”

While the flood crisis worsens in the south-east corner of the state, flooded areas further north are mopping up. Local newspapers, a lifeline for residents in the midst of disaster, are covering the aftermath. Michael Derry, a reporter at the Bundaberg News Mail, says some roads are still closed after the worst of the flooding last week, but the danger has passed: “There’s no houses going under or anything.

“The recovery effort started probably a week ago, it has been going pretty well. I think the priority is getting people back into houses and cleaning up their houses. Businesses are trying to get back on their feet as well. We’ve got a pretty good disaster management committee that’s working pretty hard.

“… some people just had to throw away absolutely everything because it was all ruined. There’s been a lot of donations and stuff, and some people have basically refurnished their houses from donations, people have been pulling together really well. Some of the businesses on the river were quite badly effected, the town marina was quite bad, they lost their pontoons, they lost boats which were just breaking free and drifting down the river and crashing together — so it’s pretty horrific.”

From Rockhampton, scene of some of the worst flooding over the past fortnight, Emma McBride from the Morning Bulletin reports: “It’s slowly starting to go down here.”

Further south across the Hervey Bay area, where the worst of the flooding is over, Kerri Jackson, a reporter from the Fraser Coast Chronicle, told Crikey: “There’s been some property damage at Maryborough, the river has burst its banks, but we’re nowhere near as bad as Toowoomba — what’s happened down there is an absolute tragedy.”

And on the Sunshine Coast, where flood warnings have been reissued after more rain, Sunshine Coast Daily hack Gordon Clark reports: “It’s raining heavily at the moment but the forecast is that it will clear as the day goes on. Families have been effected in other regions, some of those have lost people so we will be talking to them about that situation, but in terms of damage to the north coast we’ve been very lucky.”

Meanwhile, a psychologist who has consulted on emergency management and media coverage, warns the media has an important role to play during and after the current crisis.

Dr Rob Gordon, who consulted on the Victorian State Emergency Plan, told Crikey yesterday that everyone touched by flood damage across the country has a story. “What we need for recovery is that everybody feels they can speak about and feel the significance of their own loss, however large or small it is,” he said.

“What tabloid media usually do is look for someone with a highly emotionally charged story, which is usually a complaint or criticism, then they grab that. They are almost constantly working to enhance criticism. If the media simply go in and they just take this in the way they would take normal stuff, they’re going to exploit these people because they’re going to grab [the most emotionally charged story] and put it on the front page.”

Gordon says this type of reporting, choosing the most newsworthy stories, enhances the divisions caused by the randomness of the event, leading to worse division within the community.

His guide to disaster coverage, sighted by Crikey and emailed to all ABC Local Radio staff currently covering the floods, says that good disaster reporting works to counter the divisive forces present within a community, rather than exacerbate them. Media agencies should avoid attempting to apportion blame while the recovery effort is still ongoing. Journalists should make an effort to tell everybody’s stories, not just the most interesting ones. And the media should stay on after the floods have abated, and continue to visit regularly, to ensure that the community isn’t left feeling isolated and abandoned.

Rob Gordon is so right. The media need to cover more of the “good” stories of people helping others out and the generosity of Australians in adversity. It is natural for people to be angry after they have lost everything and they may apportion blame in ways that they may regret later, so these people should not be exploited for journalistic or political purposes. What will get us through all this is the strength of the Australian people, not our weaknesses or simplistic reporting.

Yes, Rob Gordon is dead right. And everyone is an expert when unprecedented events like this occur. I’m sick of hearing governments blamed for unforseeable disasters.

Also, I see that your report shows the disease of reporters who have no idea whatsoever of the areas they are talking about. Dolby is a hi-fi sound system. Dalby is a wet town in Queensland. I’ve heard the most appalling mispronunciations of place names during these floods, particularly by the ABC 24 weather girl, but not her alone. Whatever happened to doing a little research?