Happy birthday, mum, I love you. I’ll come help clean up as soon as I can get through

Toowoomba is on a mountain, how does it flood in Toowoomba? asks Matt Granfield, of mattgranfield.com

I called Dad. Mum was indeed missing. It wasn’t easy to believe. Toowoomba is on a mountain. Flash floods happen in canyons to people in helmets. Not to my parents at work. He sounded worried. Imagine how a man standing on a roof looking for his wife in a river that used to be a street would sound. It was just like that.

The flood waters had started rising quickly. Mum had gone out the back of the shop to their little car parking area to move one of the cars to higher ground. The water was already up to the doors by the time she drove off. In the minutes since she’d been gone, the Toowoomba CBD had gone under. You might have seen the footage. Cars were being swept along like whitewater rafts made by grade seven woodworking students. They were taking out trees with the same ease as they were taking out wheelie bins. It was hectic.

Two creeks that run through the centre of town converged at a point next to Murray’s Art and Framing, my parents’ business — what was left of it anyway. Weeks of rain followed by a massive three-hour deluge had turned the creeks into a raging torrent, the kind Bear Grylls would try and find another way around. 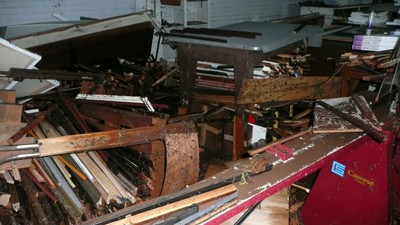 The downstairs art supply shop and picture framing part of the business is completely ruined. There’s not much left. I think the only salvageable things are a few tubes of paint, which are lying on the ground. The art gallery upstairs is OK, luckily. So is mum. She’d made it out just in time. Two minutes later and it would have been grim. Quite a few people didn’t. Mum and Dad don’t have insurance for flood damage. I don’t think many people in Toowoomba would. It doesn’t flood in Toowoomba.

Happy birthday mum. I love you. I’ll come and help clean up the shop as soon as I can, it’s too dangerous to drive at the moment. They’re saying more than 30 people are stranded near Gatton and that they have grave fears. It’s going to be a terrifying night for some people, I’m so glad you’re OK.

*This first appeared at mattgranfield.com

Flood inquiry: bureau ‘had no responsibility to report flash floods’

Well done Matt. You have captured the chilling shock of hearing such news very well in this piece of writing.

@Jenny. My thoughts exactly. It’s all so difficult to comprehend from the safe, dry distance of Sydney. Best wishes to your family. Thanks for sharing your story.