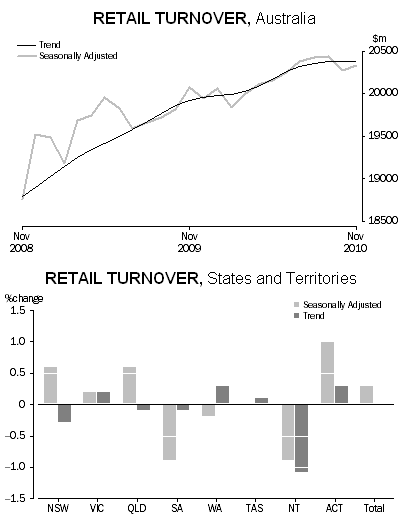 While the construction performance index rose to 43.8 from 42.2 in November, figures below 50 point to a shrinking industry.

An amazing performance in NSW. The most significant political achievement over the holiday season has to go to the Labor Government of New South Wales which still managed to turn the holiday lack of interest in politics into a further vote losing performance. The catalyst was the reluctance to allow any proper scrutiny of the way the Government went about selling off rights to electricity distribution. The Crikey Election Indicator is still being too kind in its assessment of Labor’s chance at the election in March.

Anecdote of the day. The inflammatory language of politicians might have had nothing to do with the shooting of US Congresswoman Gabrielle Giffords but it has had the benefit of exposing the populist rantings of many Republicans to the criticism they have long deserved. Take this particularly distasteful example last year by the new Speaker of the House of Representatives John Boehner as reported by Rolling Stone:

Boehner suggested that by voting for Obamacare, [Steve] Driehaus “may be a dead man” and “can’t go home to the west side of Cincinnati” because “the Catholics will run him out of town,” Driehaus began receiving death threats, and a right-wing website published directions to his house. Driehaus says he approached Boehner on the floor and confronted him.

“I didn’t think it was funny at all,” Driehaus says. “I’ve got three little kids and a wife. I said to him, ‘John, this is bullshit, and way out of bounds. For you to say something like that is wildly irresponsible.'”

Driehaus is quick to point out that he doesn’t think Boehner meant to urge anyone to violence. “But it’s not about what he intended — it’s about how the least rational person in my district takes it. We run into some crazy people in this line of work.”

Driehaus says Boehner was “taken aback” when confronted on the floor, but never actually said he was sorry: “He said something along the lines of, ‘You know that’s not what I meant.’ But he didn’t apologize”… 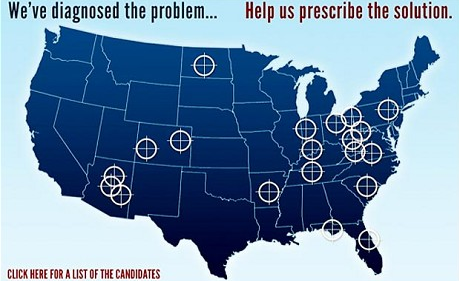 In the Crikey blog The Stump yesterday we drew attention to the particularly pro-violence effort of Sarah Palin and contrasted it with some words of wisdom by former Democrat President Bill Clinton about how words do matter in political life.

Chinese wine market developing nicely. A little bit of a boom in wine drinking and the Chinese industry is showing its capacity to follow in the footsteps of its longer established peers. Last month came the news that six people had been detained, several wineries shut down and bottles pulled from shelves in China after authorities found wine containing several chemical additives.

The local media reported that the incident in Changli county in the central province of Hebei — an area dubbed “China’s Bordeaux” — involved wineries doctoring their beverages with sugar water, colouring agents and artificial flavourings, and then falsely using famous brand names. A leading industry expert, Huang Weidong, was quoted as saying the additives could cause cardiac irregularities and headaches, and were possibly carcinogenic.

Now comes the news that Chateau Lafite Rothschild is becoming a very popular tipple with merchants offering to pay 2,900 yuan ($A420) for a good vintage bottle. “We’ll offer 100 yuan less for the Carruades de Lafite,” a Beijing-based bottle dealer, who gave his name as Mr Huang, told the London Daily Telegraph’s correspondent. But the bottles “need to be in the best condition possible,” said another dealer, called Mr Ye, at a Shanghai company. “It is very important. And I only want genuine bottles, no fakes,” he added.

Those yuan, of course, are just for the empty bottles. When filled by the wine counterfeiters the price increases tenfold as the Chinese learn the great art of wine fraud perfected over many years in the auction houses of Europe. Back in April 2006 that prominent wine magazine Decanter carried the headline “Counterfeit wine common”.

Serena Sutcliffe, head of Sotheby’s International wine auction department was quoted as saying: It was “common” for her to turn down $1 million worth of wine which “just isn’t right”. “I am not prone to exaggeration”, she said, “but given the amount of wine I see, it is absolutely horrifying”.

And added: “..there are many more trophy wines around than there used to be… There were more 45s sold and drunk in 1995 than had ever been made. A lot of the best wines were virtually finished 30 to 40 years ago, and now they’re growing on trees.”

For those of you interested in this subject of wines that we mere mortals cannot afford to drink, I have reproduced on Crikey’s The Steump website an article I wrote back in 2006 for the winesite Glug on an experience the publishing magnate Malcolm Forbes had with his purchase after paying £105,000 in 1985 for what the auctioneers described as a bottle of 1787 Lafite.

European financial worries still bubbling along. The fears about the solvency of  European governments continues. Greece and Ireland are already well and truly on the endangered list and now France and Germany are reportedly urging Portugal to join that peripheral pair on the list of those accepting an international bailout as soon as possible in order to prevent the debt crisis spreading to yet more countries. The Portugal 10 year is at 7.1%, the Ireland 10-year bond yield is over 9%, and the Greece 10-year bond yield is at a record 12.6%. At these levels investors clearly fear that a haircut is very much on the cards for bond holders. 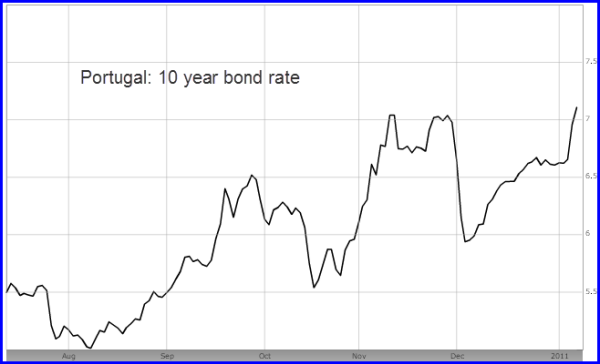 The day of reckoning for the next stage of this long drawn out sovereign debt crisis could well come on Wednesday when Portugal hopes to raise new funds in a bond auction.

Richard, is it really helpful to refer to a comment by Boehner, leaving implications danging there which aren’t so very different from those seized upon elsewhere by nutty haters to parade their paranoid fantasies?