In today's Media Briefs the phones went dead but the celebrities went drinking at the Queensland flood telethon, the Oz names on a new iPad team and more....

The phones went dead, the celebrities went drinking. More than $10 million was pledged via Channel Nine’s star-studded telethon for Queensland flood victims last night. But how much more could have been raised if the phones worked? Or if the celebrities answering ditched the party afterwards to keep taking calls?

Spencer Howson, ABC Local Radio’s top-rating breakfast presenter, was one celeb who scurried from the phone room at a rain-soaked Zillmere in Brisbane to an exclusive Southbank soiree once the TV telethon had wrapped-up. He tweeted at about 10:30pm last night: “Suddenly it’s all over and we’re en route to the after party…” Yes, the after-party — for the flood relief telethon.

All reports suggest it was a boozy bash, “chockers with celebrities” as Spencer revealed on radio this morning. Another starry-eyed Twit, MolksTVTalk (who even captured Premier Anna Bligh’s attention at the party), snapped the revellers, including hosts Eddie McGuire and Leila McKinnon holding court. 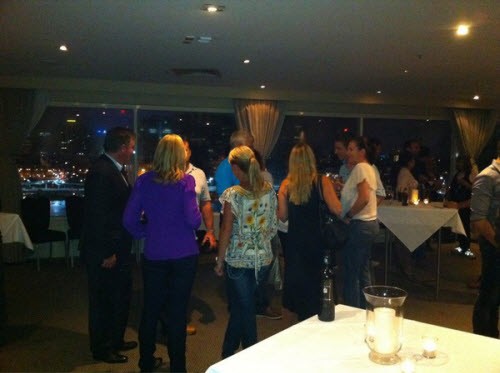 Back at the two busy phone banks, volunteers were madly taking calls. As Spencer told his radio audience today, the phones actually went down for much of the night — the well-primped were twiddling their thumbs for at least an hour and a half without being able to take calls. Eventually the lines returned, but “when we left there were still 20,000 on hold waiting to get through”. Nothing, it seems, was going to keep Spencer and his celebrity pals from a party — even if it was to celebrate raising money to help thousands of people who’d lost everything.

“If you had an autograph book you’d have had a field day there,” Howson, a little seedy perhaps, said on radio this morning. What’s a flood crisis when you’re surrounded by TV soapie stars? — Jason Whittaker

The Oz takes on new iPad team. Are you highly organised, have excellent interpersonal skills and love technology? The Australian wants you — seven of you, in fact, to build the paper’s much-criticised iPad application. The call has gone out on Seek for digital designers, producers, developers, video journalists and project managers. 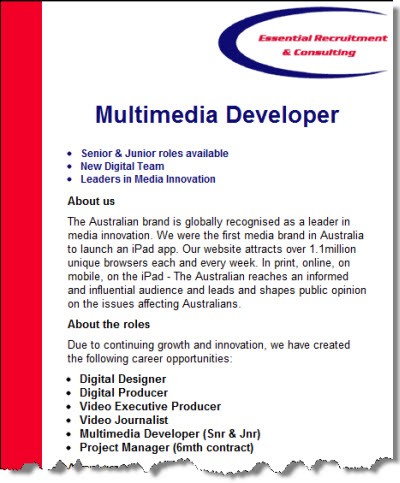 The ad finishes with a question: “Does what you do today make a difference? It will at The Australian. Don’t just change jobs, make a career move.” Apply now! — Crikey intern Liam Mannix

The ex gives the finger to Zuckerburg. Erica Albright — the girl who dumped Mark Zuckerburg, setting in chain a series of events that lead to the creation of Facebook — has, using some of Zuckerberg’s old code she found in an email, recreated the precursor to Facebook, Facemash.

When Mark first built it at Harvard, he used it to compare Harvard females in a hot-or-not style competition — which, of course, caused massive outrage, and cast Mark in an unfavourable light in his unauthorised biopic, The Social Network. Now Erica is using Mark’s code, and the domain name http://facemash.ericaalbright.com, to compare her Facebook friends in a “who is my hottest Facebook friend” contest. With public voting!

Says Erica: “The winner of this first photo contest will win $100 cash and a $100 gift certificate to DonkeyTs.com. Voting will end Friday 1/14/11 at 1pm CST….this site is using the same algorithm that Mark Zuckerberg used for the original facemash.com site.” That’s one way to get back at him… — Crikey intern Liam Mannix

A new channel is born — with a few Neighbours

“When ELEVEN launches tomorrow, chief programming officer David Mott will see another chapter in TEN’s network strategy fall into place. It may be arriving later than some of its rivals and in a quieter period in terms of viewing patterns, but Mott tells TV Tonight the channel is part of a long-term vision.” — TV Tonight

“The nation’s peak Islamic group has warned that the radio licence of the Sydney-based Muslim station 2MFM, which has been accused of links to a ‘radical cult’, should not be renewed because it is promoting ‘sectarian fringe views’.” — The Sun Herald

Sky’s in profit, but darker clouds ahead

“The pay-TV service Sky News Australia has posted another year of solid profit growth. But earnings may soften this year amid weaker new subscriber numbers for Foxtel and Austar.” — The Australian

“Twitter aims to become an independent company funded solely through advertising, but has not yet considered flotation, the CEO has revealed.” — The Times

From prison, the art of letters to the editor thrives

“To the Georgia Department of Corrections he is inmate No. 544319, in prison on a five-year sentence for drug possession. But to the editors of Maxim, he is Mike Bolick, a faithful reader and regular letter writer who has loopy penmanship and an eye for beautiful cover models.” — The New York Times