Take a look at some of the latest WikiLeaks embassy cables, including Peter Garret's admission that it was unlikely Australia would support the International Whaling Commission's plan to allow certain whaling and US concerns over a suspected FARC terrorist.

It’s been awhile since Crikey pored over the WikiLeaks cables and a few interesting ones have come to light while we were busy nibbling mince tarts and drinking New Years champagne, like Peter Garrett admitting it was unlikely Australia would support the International Whaling Commission’s compromised plan to allow certain whaling in the Southern Ocean Whale Sanctuary, months before that was known publicly. Also, China needs an image makeover in Latin America — and it thinks Latino workers are lazy and the US complains about a suspected Colombian terrorist being granted refugee status in Brazil.

We will ramp up our WikiLeaks coverage once Crikey is back publishing next week. But here’s a taste of what cables are been released in the last week or so. Because, let’s face it, Crikey isn’t the only media outlet in holiday mode at the moment…

Shows that Environment Minister Peter Garrett had already decided not to sign the International Whaling Commission’s whaling deal and was looking to the US for help.

“Garrett believes that Australia will not be able to accept the current agreement being considered on whaling, and feels the U.S. and Australia, as the two most important donors in the CTI [Coral Triangle Initiative], need to increase coordination of efforts to ensure successful outcomes under the CTI.”

Garrett also admits that the planned international whaling agreement would be difficult for Australia’s government as anti-whaling sentiment was so high in the Australian public and the agreement fell short of these expectations. However, Garrett’s chief of staff David Williams said that Australia will accept a compromise on the whaling deal as long as other conditions — including “sustaining the commercial moratorium, keeping whaling out of the southern sanctuary areas and Australian antarctic waters, bringing all whaling under the control of the IWC, and preventing future scientific whaling” — were all met.

Garrett also discussed the possibility of using Australia as a base for travel to Antarctica, thanks to both its close proximity and its infrastructure. The US ambassador expressed a personal interest in visiting the polar region.

“Garrett seemed eager to establish a good relationship with the Ambassador but was less relaxed in this meeting than we have seen him in the past. While he was consistent with his positions on whaling, CTI and other conservation issues, he appeared less willing to push hard on those issues than in previous discussions both here and in Washington.”

(for more on whaling, today’s Fairfax papers have an exclusive by Philip Dorling on this topic, showing that Rudd’s push to take Japan to international courts was simply to divert public attention from Labor’s troubles and there was internal Labor conflict with senior ministers over the decision) 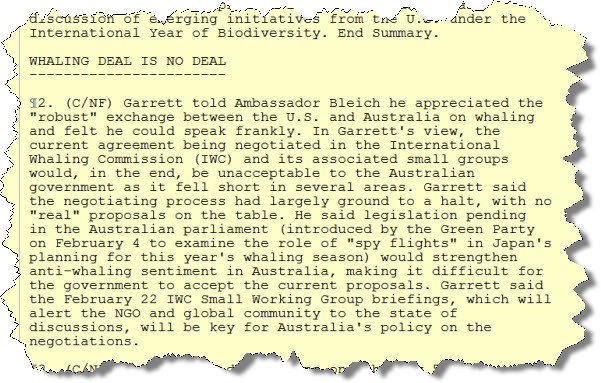 CABLECODE#: 06BRASILIA1910
Date: 12-09-2006 13:01
BRAZIL: GOB OFFICIALS COMMENT ON REFUGEE CASE OF SUSPECTED FARC TERRORIST
Suspected FARC terrorist Francisco Antonio Cadena Collazos was granted refugee status in Brazil, resulting in a démarche given by the United States government to senior Brazil officials to note their concerns, since the US government says the refugee status was given “despite an outstanding extradition request for Cadena from Colombia’s government (GOC) and Brazil’s obligation to deny safe haven to terrorist under United Nations Security Council Resolution 1373.” In response Brazil said the refugee status was granted mainly on “humanitarian” grounds and that they did “had not regarded Cadena as a ‘terrorist’ but as a refugee from an ‘internal armed conflict.'” Brazil also reveals it had debated for a year on whether Cadena should be granted refugee status and “despite credible reporting to the contrary” (according to the US embassy) the president of Brazil’s refugee commission CONARE denied political pressure had encouraged the granting of refugee protection. 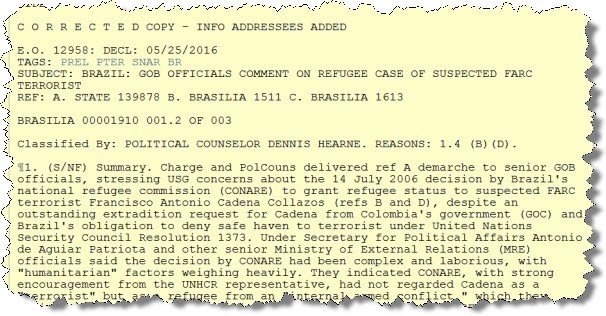 CABLECODE#: 09SHANGHAI170
Date:15-04-2009 03:03
CHINA’S GROWING TRADE AND INVESTMENT TIES WITH LATIN AMERICA: VIEWS FROM SHANGHAI
A cable where scholars in Shaghai offer their opinions and analysis of China’s relationship with Latin America. While it is predominately an economic relationship;

“the bigger problem for China in Latin America right now, said the scholars, is its image among the local population. Zhang [Zhang Jiazhe, Vice Director of the Center for Developing Countries Studies at the Shanghai Academy of Social Sciences] said competition from Chinese imports, like textiles and shoes, is creating negative feelings towards China among countries with large low-end manufacturing industries, mentioning Mexico as an example. There is also a perception in Latin America that Chinese investors are like ‘locusts,’ extracting minerals and natural resources and leaving very little of lasting value behind, said the scholars. Chinese companies, on the other hand, find it difficult to invest in Latin America, according to Niu [Niu Haibin, Deputy Director of the Center for Latin American Studies at the Shanghai Institutes for International Studies]. Chinese companies complain about strong labor unions and cultural conflicts in Latin America, including a ‘different work ethic’ between Latin American workers and Chinese workers, said Niu. Chinese companies thus prefer to import workers from China for projects in Latin America, often at the cost of local resentment.”

One conclusion was that it would be easier for Chinese businesses to do business in Africa, not Latin America, as its “institutions and regulatory environment are less well-developed than Latin America’s.” One cable line in particular stood out, when Eduardo R. Ablin, Consul General of the Consulate-General of Argentina in Shanghai discussed the high levels of export of Argentinean products to China, particularly poultry: “Ablin thanked KFC for getting the Chinese hooked on chicken wings.” 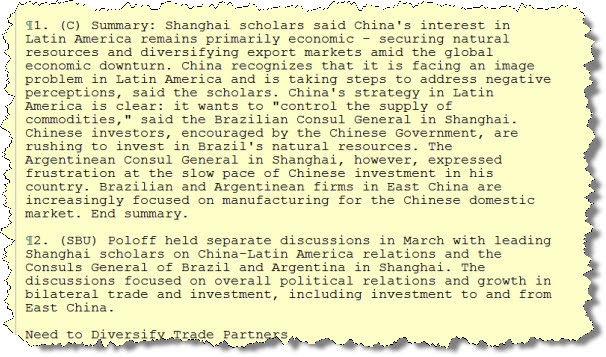 ‘It’s been awhile since Crikey poured over the WikiLeaks cables ….’ Oh? What did you pour over them?

Perhaps they were pawed?

Perhaps someone could explain it to me, but what exactly did Garrett do here that was ‘bad’ or newsworthy?

Ok, it is obvious that Mick the Crikey sub editor is away on holidays until next week. Poured/pawed/pored is now updated. Thank you.

While you’re there Amber:

“It’s been a while since Crikey…” “… drinking New Year’s champagne…” and this howler:

“But here’s a taste of what cables are been released in the last week or so.”

“Because, let’s face it, Crikey isn’t the only media outlet wot carnt spel proply at the moment…”