Journos' union the Media Entertainment and Arts Alliance may have been hacked. Plus

Paper scoops rival’s announcement. The Bendigo Advertiser, a Fairfax daily in regional Victoria, was trumpeting its new editor this morning — Rod Case, a former deputy editor and editor of the tri-weekly Wimmera Mail-Times in Horsham. “He will bring a wealth of experience and stability to our newsroom of more than 30 journalists,” general manager Margot Falconer said.

But readers of independent rival the Bendigo Weekly found out much earlier. The paper hit social media to break the news yesterday — about two minutes after it was announced to staff, we’re told. — Jason Whittaker

MEEA gets performance boost. Journos’ union the Media Entertainment and Arts Alliance may have been hacked … 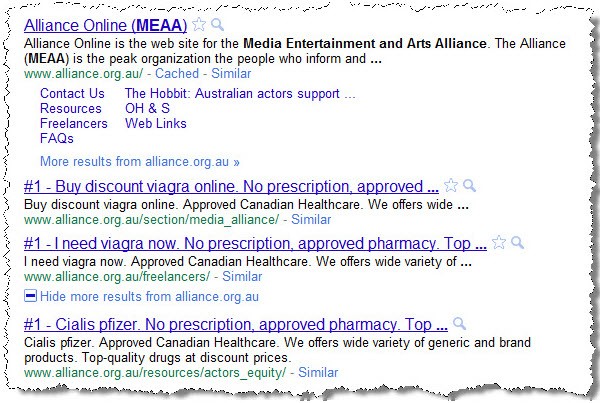 “This updated, Americanised version of the Nativity from our friends at Next Media Animation certainly says something about Jesus’ origin story and the way certain parts of the world see us now. I’m not quite sure what, but it’s something.” — The Awl

“Officially, the panel is called the WikiLeaks Task Force. But at CIA headquarters, it’s mainly known by its all-too-apt acronym: W.T.F…” — The Washington Post

“Though she is often called the most fashionable woman in Congress, it seems that outgoing Speaker Nancy Pelosi is ready for a makeover. The Washington Post reported Wednesday that Pelosi ‘has turned to director Steven Spielberg for help remaking her personal brand’. After seeing her party suffer considerable defeats in the mid-term elections this year, Pelosi seems to be hoping for a turnaround in 2011 with some help from Tinseltown.” — Politico

“It started as a rival to our wives’ book club. Kind of like, ‘Hey, we read, too! Just cause we’re guys doesn’t mean we don’t read (sometimes)’. But it was more than that. It was, ‘Hey, now we’ll have an excuse to get together and watch p-rn on our iPhones’. Actually, it was both. Something like, ‘Hey, we’re middle-aged married guys with kids and we have no legitimate reason to hang out’.” — Salon

“Twitter is down. Skype is down. Tumblr is down. Facebook is down. Twitter is down again. You can base an entire tech reporting career around writing these types of posts. Because if you’re like me and millions of other users right now, you can’t access your your Skype account due to a network connection failure. And like electricity or internet, I need Skype to do my job well.” — TechCrunch

Pope to take BBC’s Thought of the Day spot

“Benedict XVI is to deliver the Christmas broadcast on BBC Radio 4’s Thought for the Day, becoming the first Pope to speak in the program’s famous religious slot. He will make a ‘warm Christmas message to the nation’ at 7.45am on Christmas Eve. It is the first time that he has presented a script specifically written for television or radio.” — The Australian

Re technology failures, it would seem prudent to avoid relying too heavily on any single service, right up to and including the internet itself. Sure, it is unlikely the “internet” will fail, but that is not where the risk lies. The phone line, mobile tower or corporate network that faithfully transports your data packets to and from your e-device is perhaps the weakest and most invisible link in our global network.

No matter, keep a mating pair of carrier pigeons out the back and when the e-world falls in a heap you’ll make a fortune breeding them.