Relatively unknown 12 months ago, a household name today. It's no surprise that Townsville-born whistleblower Julian Assange took out Crikey's Person of the Year award. 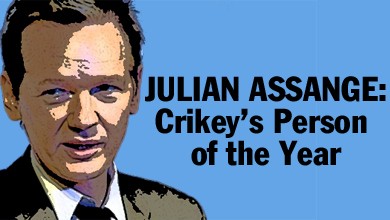 Relatively unknown 12 months ago, a household name today. It’s no surprise that Julian Assange took out Crikey‘s Person of the Year with such a whopping margin (he polled 38.6% more than the second-placed Bob Brown, whose Greens party also had a big 2010).

Even before he started drip feeding confidential US government cables last month, the Townsville-born whistleblower gained notoriety for leaking information powerful people wanted kept secret. From the release of the infamous “collateral murder” video in April (viewed more than 10 million times) to the massive dump of confidential Iraq and Afghanistan war logs, Assange has had a pretty big 12 months, it’s fair to say.

The enigmatic, elusive WikiLeaks founder is now fighting extradition to Sweden on s-xual assault allegations, while the US government is looking for ways to prosecute him plus stop him leaking more sensitive government documents. Whatever the outcome of the claims leveled against him, Assange has vowed to continue his pursuit of freedom of information.

An enemy of the state and a champion of democracy, some say he has changed the media landscape forever. One thing is for sure, we’ll be hearing more from Julian Assange in 2011. 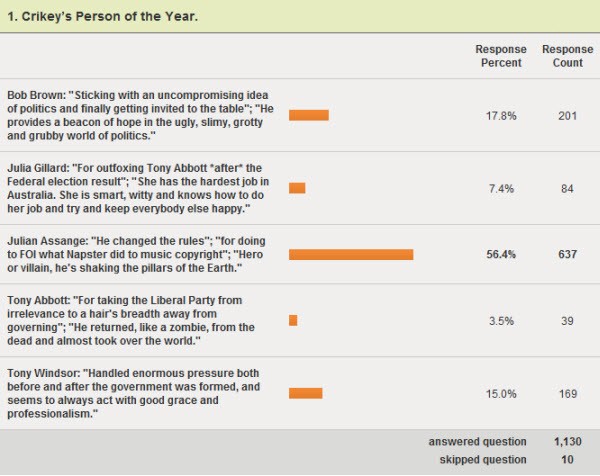 Bradley Manning is the guy that should get the guernsey. He’s in solitary now and he’s in jail for decades to come, but he put his arse on the line.

There is no evidence that Bradley Manning did anything. Some loser claimed he did so but not a grain of proof has ever been shown.

If he did though, he deserves to be released and lauded as a first class world wide hero.

I watched “The War you don’t see”, Pilger’s latest film and watched the loser journos who embedded or flat out lied about Iraq cringingly begging for forgieveness while others persist to this day in believing they are right.

The most appalling was the description by the soldier who responded and saved a little girls life and watched a little boy die – I was sobbing.

Assange is a true hero – thankfully he has support in the masses of ordinary Australian’s even if our pollies are gutless.

Sort of Marilyn. Manning did tell his mate (the one who ratted him out) that he had send the files to Wikileaks – I don’t think anyone contests that he claimed that (the evidence is in logs of his on-line chats with the guy). Of course, he’s not been convicted and he’s been treated appallingly. I have no idea what sort of trial defense he can or will mount.

I hope Julian Assange has got lawyers in teh US because it looks like they want to pin espionage charges on him if they get the chance. Some right wing idiots in tankland are even calling for the death penalty aka Sweet home Alabama.

What is annoying about western governments is that they say one thing publically and privately either actually do the opposite or advocate the opposite. An essential aspect of democracy is transparency and Wikileaks provides that in spades. It is such a delight to see lying politicians across the globe squirming in their boots.

Politicians hate being caught with their political pants down so to speak and this is why the yanks are gunning hard to get Julian in their official sites.
Hopefully Wikileaks is more than Julian Assange and their work will continue if he is sidelined.

It would be interesting to find out how they got access to the cables ie – via officials leaking them or via accessing government’s computer systems which contain the cables or via other unknown methods.
Comrade Julia should see Wikileaks as a blessing in disguise as if she thinks there is half a chance that her acts of stupidity and deceit are likely to see the light of day she might think before she acts.