IMF not on the money when it comes to house prices

The good news it that the International Monetary Fund stated last week that Australian residential property prices are only 5%-10% over-valued. The bad news is that it doesn’t appear that the researchers of the IMF report have any idea what they are talking about.

We have good and bad news.

The good news it that the International Monetary Fund stated last week that Australian residential property prices are only 5%-10% over-valued. The bad news is that it doesn’t appear that the researchers of the IMF report have any idea what they are talking about.

Of course, while the IMF found that prices were 5%-10% too high, it begrudgingly conceded that “a simple analysis of price-to-rent ratios and price-to-income ratios point to a higher overvaluation”. Fortunately, the IMF also noted that “some country-specific mitigating factors suggest that any house price correction in Australia is likely to be orderly” — this is despite Australia having one of the highest levels of personal debt in the world, which would indicate that a house price correction would be very far from orderly.

The IMF report, prepared by Patrizia Tumbarello (a relatively young Italian academic with little or no business experience) and Shengzu Wang (another young non-Australian academic whose LinkedIn page suggests he is looking for a new job) not only contradicts common sense, but also several previous IMF reports.

For example, in 2003, well-regarded IMF research director Kenneth Rogoff told Inside Business that Australian home prices, which had even back then have risen by 50% since could not be sustained. Rogoff noted that the IMG had undertaken a study and that “in countries which have booms, and all of the ones I listed have had our statistical definitions of booms, there is probably of a bust, it is not 50-50 but it is about 40%.”

In 2008, the IMF again warned of an Australian housing bust, stating that the gap between house prices and underlying value fundamentals is close to 25% in Australia, with only the housing markets in Ireland, Netherlands and the United Kingdom in a worse condition.

Since 2008, the median Australian house price has increased by a further 15%, according to the Australian Bureau of Statistics.

In April this year, the IMF again warned that “the dramatic rise in residential property prices in recent years, especially in Australia, Ireland, the Netherlands, Spain and the United Kingdom has heightened concerns of an asset price bubble and thus the likelihood of a sharp price correction.”

But the recent Tumbarello/Wang IMF report has no such concerns, finding that Australian residential property is a mere 5%-10% over-valued based on all sorts of flawed reasoning.

Aside from quoting the usual bubble-excuses (supply shortage, immigration), the foreign-based IMF academics also produced graphs such as this one, which contains two completely different scales and is highly misleading: 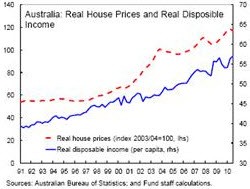 Looking at the graph, it would appear that house prices have tracked disposable income growth reasonably closely since 1991.

However, if you look more closely at the scales and a very different result appears. Disposable income per capital has risen from about$40,000 to $57,000 annually — an increase of 43%. Over that same period real house prices have risen from an index of 58 to approximately 110 — a rise of about 90%. In this regard, it is hard to tell whether Tumbarello/Wang are trying to mislead readers or are unable to understand basic arithmetic.

Tumbarello and Wang then produced this graph: 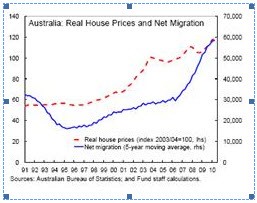 Again, prima facie, it appears that house prices have risen as migration has increased. Of course, that comparison is completely irrelevant — migration is only one factor which effects supply — what is equally important is the number of dwellings being constructed and the number of inhabitants per dwelling. Those factors were ignored, or never considered by the non-Australian authors of the report.

Other reasons proffered for Australian housing allegedly being only 5%-10% over-valued included “structural changes such as permanently lower nominal interest rates that have occurred since 2000” as well as Australia’s house price-income ratio being 20% above its 10-year average.

Such reasoning cannot go unanswered. First, while the Great Moderation allowed interest rates to remain artificially low for a decade, but that period appears to have ended — to claim that interest rates will remain “permanently low” is better placed in a fairy tale than what purports to be a serious piece of research. Meanwhile, using a 10-year average when house prices have been over-priced for a decade is hardly a suitable measure. Plus, the authors fail to explain why even a 20% over-valuation can lead to Australian property prices only being 5%-10% over-valued.

Exactly what the IMF researchers think of Australia’s level of mortgage debt to GDP (which is about 90% is higher than the 79% level prevailing in the US before its housing bubble popped in 2007), or the house price-to-rent ratio or the net yields on property of about 2% were not mentioned. The authors appear to believe that Australia’s improving terms-of-trade can underlie a permanent price rise — the fact that returns on property are falling, or that prices have increased because Australians have simply borrowed more money appears to have been ignored.

Are highly leveraged homeowners about to crash?

Fear and status still the drivers in housing sales

the Australian property market is trapped in an almighty price bubble.

The IMF research is -I agree- light ..and the misalignment of the graphs is misleading but our residential property market cannot be compared with the fallen markets in Ireland or USA.

The critical difference is the stranglehold that our Big 4 banks have over the marketplace.

With tye onset of the GFC many banks were propelling the notion of credit rationing to the property development industry . This was done to protect their downside exposure to their heavy cumulative $300bn plus exposure to residential mortgages. By limiting the availability of loans to property developers they were indirectly restricting the supply of housing stock .Property developers cannot today obtain bank funding ..they are all saying so.
And now the banks are actively managing their $300bn residential mortgage exposure … it is harder for borrowers like Adam to obtain a residential loan now.
Residential prices may well fall ….but the excess air in this market will be a slow release over a period of years .
Stop trying to frighten the horses Adam.

It would be nice to think that things can be so orderly but I think you’ll find that no matter happens with supply if someone borrows more than they can pay then things will inevitably come crashing down, especially in such a series of leveraged transactions that residential housing are.

I did chuckle, actually it was a belly laugh, when I read that report from the IMF last week.

I would hazard a guess and and even wager that Tumbarrello and Wang would n’t even know where Australia was…although they may have heard of it.