The book industry has suddenly, shockingly, entered its own strange zone, a state of imminent crisis as it slips from brute pulp to the ethereal electronic.

For a book designer, walking (or surfing) into a bookshop can be overwhelming — an effect not so much Stendhal syndrome as, say, a couture seamstress walking into a department store. This year I’ve struggled with fiction fatigue and a shattered concentration (Nicholas Carr blames the net). Reading happened in a strange zone — firewalled from the stop-go of daily life.

The book industry has suddenly, shockingly, entered its own strange zone, a state of imminent crisis as it slips from brute pulp to the ethereal electronic. As Malcolm Fraser predicted, Life wasn’t meant to be e-asy.

Here are some books that have found long term storage in my biosoftware in 2010.

The iPad — it changed everything. Despite early reports that it wasn’t a really revolutionary device, it really was. It’s the harbinger of the believable new — we didn’t believe, and now we do. It was proof that e-books can look good, and really sharp, and be read in the dark, and with type as big as your father-in-law likes (and you can surf when not reading.) The iPad is the first locust, or first robin, or first blossom. The rest are coming, slates and tablets and pads, soon, and suddenly. People, get ready.

Easily the most engaging book of my year. This book of literary criticism is an extremely curious animal with which I argued for the course of its 618 entries; marginalia infests my copy. A holiday book, I read it in cars, at restaurants, at bars, with friends. Its ironic subtitle is “A Manifesto”, and Shields’ aim is to disabuse fiction of its established claims on our goodwill. He wants to knee the belletrist tradition, he wants to mix it up — reality writing (ideas, memoirs, essays) crossed with fictionalised narratives. It’s excited the natives from San Francisco to London. Zadie Smith stages a defense against “novel-nausea” (bits here and here).  Jonathan Lethem says, “I’m lit up by it — astonished, intoxicated, ecstatic, overwhelmed.”

If I had fiction fatigue this year,  I also suffered from melody fatigue. My favourite new CDs featured kinds of rap; there was also a bunch of old stuff that is definitionally classic.

And there’s all the other sonic offerings too, given away free, made by people who love to do it. What an extraordinary thing is the podcast. (I heard my first in 2006 when the Slate politics Gabfest began.)

Ah Laurie. Her stunning Big Science from 1982 opened up a whole other channel with a sonic poetry augmented by bespoke audio tech. The tape-bow violin. The voice filter that provides her “audio drag”. Drumming on her miked-up torso.

Her conceptual panache: “… you don’t always realise it, but you’re always falling. With each step, you fall forward slightly. And then catch yourself falling. Over and over you’re falling …”

Her latest is Homeland. Nearly 30 years on, her work no longer sounds audacious. But she can still generate a frisson, is still capable of the oblique perception unobtainable in conventional song.

She began writing the set on the road, she says, “making [a] … series of stories, songs and songs about America”. The first track is Transitory Life, which begins with great shuddering wails, like the muezzin call to prayer … “It’s a good time for bankers and winners and sailors / With their stories of jackpots and islands of pleasure.”

And the pleasure of the wailing reminds us that it’s become a world music cliche: Islamic, middle-eastern ornamentation — and then you remember the CD is titled Homeland, as in American security … and by then you’re already in Laurieland. This track includes one of my favourite lines: “It takes a long time for a mouse to realise he’s in a trap / But once he does something inside him never stops trembling.”

The centrepiece is an 11.5-minute epic micro-story collection, Another Day in America, where Anderson in “audio drag” intones with Olympian weariness over ominous ambient music, laced with the middle-eastern leitmotif, on a slow wash of low, noodling organ notes. She recites the chorus: “What are days for? To wake us up. / To put between the endless night.”  Unexpectedly, she is riffing on Philip Larkin, a long way from USA2010.

Larkin: “What are days for?
Days are where we live.
They come, they wake us
Time and time over.”

“I like to keep moving,” she writes in the liner notes. Anderson is not standing still. She’s a good person to journey with — fluidly undogmatic, and frankly sardonic when it counts. The sonics are understated on Homeland, but all the better to play over and again, to catch the acid drops:

“In America we like solutions to problems … [and] only an expert can see there’s a problem. / … And other experts say: Just because all your friends were fired / And your family’s broke and we didn’t see it coming / Doesn’t mean we were wrong.”

But I like it best when she is gnomic: “And you, you who can be silent in four languages.”

Looking is tiring, isn’t it — I just want to shut the door and my eyes, and lie back into a soft, deep couch.

What did you see this year? Without notes I wouldn’t recall past back last week. 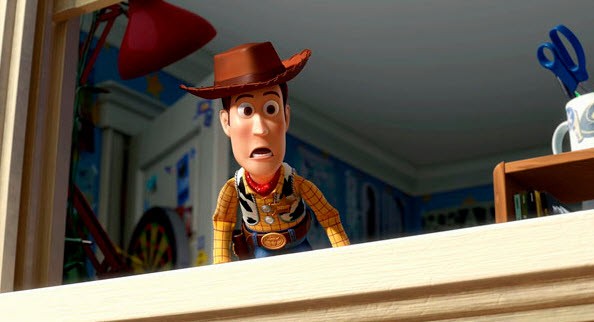 Here are my personal highlights for the year gone by:

For me, the film of the year, actor of the year, director and screenplay of the year. Tenser than Hurt Locker, far more intelligent than Inception, more alien than Avatar, more revealing and relevant than The White Ribbon, more moving than, er, Iron Man 2.

Jennifer Lawrence as Ree Dolly is remarkable — “an almost-plain, scrubbed beauty who carries herself with a stubborn but vulnerable grace.”

A tie for the best film, though admittedly it’s more achieved. This is masterpiece cinema. It was the most moving and delightful and sad and joyous art movie of the year. It’s also among the most emotionally real of movies.

“Here’s another thing — somewhere in the last reel, in a passage of 10 or 15 minutes, the sense of tragedy and loss was so powerful, I found myself circumspectly sobbing.” Though the ultrasenior father-in-law did not.

Picture up top of the page is Woody, of course, horrified at things going wrong — which is the way most of the film goes. Part of its genius is that you get to smile and laugh despite the cascading mishaps, and horrors.