Surely, entrusting an unqualified novice with the institution that is the NT News -- home of headlines such as "Man Bashed By Prawn" and "Garden Gnomes Busted For Drugs" -- was a dangerous move? Plus, rats in the NSW Labor ranks and other media snippets of the day.

Laboring over the Victorian loss. When departing Victorian ALP state secretary Nick Reece fronted the Melbourne Press Club to explain away his party’s failure at the polls last week, he was confronted by some curious company. It seems several prominent Labor enemies had booked a prime table within spitting distance of the podium to listen intently to what Reece had to say, although we’re sure no malice was involved.

Luminaries — including George Droutsas, who had sledged Reece a week earlier in The Age, Reece’s dumped predecessor Stephen Newnham, who had “gone rogue” to run his wife Fiona Richardson’s campaign in Northcote and parliamentary hopeful-turned ALP Junior Vice President Kimberley Kitching — all fixed their gazes as the Broadmeadows-bound Reece fingered the “It’s Time” factor, rather than his own failures, as the reason for the Tories’ ascent. All three committed right-wingers are believed to be itching to stamp their influence back on the state party when Reece heads for the exit in January. — Andrew Crook

Editing the NT News. There’s an old journalistic epigram that says a good journo is a “jack of all trades, master of none.” Really, it’s just an elegantly phrased way of saying we’re all a bunch of unqualified hacks*, drumming away at the keyboard with very little understanding of what it all actually means.

Or at least, the NT News doesn’t think so, because as part of a recent media stunt, they hired an average, ordinary citizen to take the editorial reins for a single day. As the region’s foremost publication for all things crocs, crime and cyclones, it was a risky decision, but as the competition winner Lucia Elliott admits, “the idea of getting inside the inner sanctum of NT News was too good an opportunity to pass up on”.

Surely, entrusting an unqualified novice with the institution that is the NT News — home of headlines such as “Man Bashed By Prawn” and “Garden Gnomes Busted For Drugs” — was a dangerous move? Don’t worry, Elliott did a decent effort, with today — her “edition” — leading with a pun-tastic story about planes more likely to hit birds above the skies of Darwin than anywhere else in Oz. 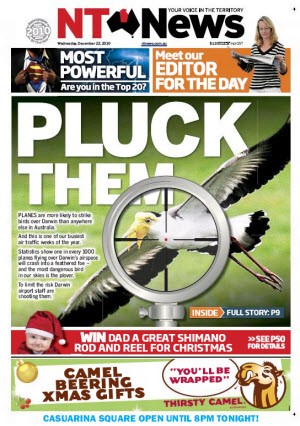 Judging by the “spilling the beans” article and video done on the stunt, Elliott picked up the feel of the place pretty quickly, saying: “Talk about a baptism by fire. To say multitasking is an essential skill here is like saying Territorians don’t mind the odd beer.” But arguably the “Editor for a Day” competition is a case of desperate times calling for desperate measures. In 2004, the paper was scoring a Monday to Friday circulation rate of 22,409, but this year, the figure fell to 20,562. Seemingly for Territorians, front pages emblazoned with a cape-wearing “Supertoad” just don’t cut it anymore…

*And if you find something supremely ironic about an intern criticising a media outlet for letting an unqualified neophyte loose, believe me, you’re not alone… — Crikey intern Alexandra Patrikios

The Daily Telegraph rats out pollies. It’s not called the silly season for nothing, and with Christmas fast approaching, even the newspapers are going a little ga-ga. Apparently fed up with the standard “cat-up-tree-makes-it-home-for-Christmas” feel-good items, The Daily Telegraph bucked the festive trend by naming and shaming the pollies NSW voters, to their great disappointment, “won’t get to sack”.

Rated according to a numerical rodent scale, the parliamentarians who made the cut include Kerry Hickey (“PRO: He used to be a milkman; CON: Wasn’t good at much else than delivering milk”), and Eddie Obeid (“PRO: Rolled several Labor premiers; CON: Put other Labor premiers in their place”).

John Aquilina scored a commendable two-and-a-half rats for falsely accusing a school student of planning a mass shooting as education minister, but was thoroughly outstripped by Joe Tripodi, a “ruthless numbers man prepared to knife leaders at will”. But it was Tripodi’s sister-in-law, Angela D’Amore, who exceeded them all, having been sacked from the Labor Party after the ICAC revealed she had been rorting expenses.

Included in the gaffe-prone line-up are a few quiet achievers — in fact, they were so successful, they were utterly silent. Kaye Griffin scored a mention for having a non-existent public profile (rated as both a pro and a con, incidentally), while the uncontroversial Marie Andrews copped a scolding for failing to meet party standards: “As a good local member not involved in any scandals she has no place in the NSW Labor Party.”

Telegraph scribes, ever tactful, even managed to sneak in a sly Seinfeld reference for good measure, writing David Campbell’s reputation was fatally damaged by his visit to a gay club — “not that there’s anything wrong with that”. With Keneally headed for a walloping, it looks like Santa might be dispensing a wad of ballot forms to houses across the state come the 25th. — Crikey intern Alexandra Patrikios

Why we should pay for news?

“The historic strength of the newspaper business, from an economic point of view, is the fact that it offers two revenue streams, sales and advertising. Both of these have for years been under severe pressure. The story told by circulation figures is so obvious that it’s difficult to find anything interesting to point out about it. A recent OECD report, The Evolution of News and the Internet, makes the picture clear. Between 2004 and 2009, the US newspaper industry lost 34 per cent of its readers; the UK industry lost 22 per cent. Since then, the speed of the downturn has increased.” — London Review of Books

Assange to divorce his Guardian?

“WikiLeaks chief Julian Assange slammed The New York Times in October for the paper’s critical front-page profile of him. That’s presumably one of the reasons that the Times — which received hundreds of thousands of secret Afghanistan and Iraq documents from WikiLeaks — was shut out when WikiLeaks provided 250,000 State Department cables to several news outlets for publication in November. The Times ended up getting its documents from The Guardian. But now Assange is taking issue with The Guardian‘s coverage of him. So could the British paper be shut out next?” — The Cutline

Rihanna and Christina get over 4,000 complaints

“British regulators have launched an investigation into this month’s X Factor finale following claims that performances by Christina Aguilera and Rihanna were too s-xy for family TV. The X Factor finale aired from 7-9 PM on Saturday, December 11. Under British rules, 9PM is the ‘watershed hour’, after which adult content can be shown.” — The Huffington Post

“Daniel Assange, it turns out, has put up a couple observations about the elder Assange, celebrated the granting of bail, and talked about what it’s like to be at a WikiLeaks-related rally seeing your family name up on a sign. He also, of course, tosses in tweets about his day, like any other Twitter user. A sampling of some of the more revelatory posts…” — The Atlantic Wire

“Brian Hanrahan, one of the BBC’s best-known foreign correspondents, has passed away following a short battle with cancer. Hanrahan, who had been diagnosed with cancer this year, was 61. According to BBC News, he had been admitted to hospital ten days prior with an infection. He is survived by his wife Honor and their daughter.” — The Spy Report

“‘It was just two nerds comparing notes,’ the spokesman said. ‘Keep the speculation in check.’ But when those nerds happened to be the Facebook founder, Mark Zuckerberg — recently named person of the year by Time Magazine — and Robin Li — the head of Baidu, the biggest search engine in China — there was no way a quiet business lunch was going to remain quiet.” — The Age

Alexandra Patrikios – not being familar with “NSW MP’s” (and who’d want to be?) – these “MPs” in the “Tele Tubby” sights (implication being “How could you vote for these unworthy party members?”) – which are from Labor and which are from their own LNP (“Limited News Party”)?

“But it was Tripodi’s wife, Angela D’Amore”. This is inaccurate