Quite possibly who didn’t make the list is more interesting than who did.

All change at the top of the list — at the end of 2009 most would have expected Malcolm Turnbull to drop significantly, perhaps off the list altogether, but far fewer would have picked Kevin Rudd not being at the top. Kristina Keneally was only days into her job when the list was produced last year, and just about everyone believes she only has days (90 or so) left.

This truly extraordinary year of politics also sees two Federal independents in the list but otherwise is pretty much as you might expect, dominated by senior Cabinet ministers and Premiers, the only other smoky being the Barnaby, who definitely had a more prominent first half of 2010 than second half — it will be interesting to see if he rediscovers his mojo in 2011.

Quite possibly who didn’t make the list is more interesting than who did. Penny Wong, the Minister for the greatest challenge of our time for most of the year and then the little known backwater of Finance for the rest, didn’t make it. Nor did her predecessor in Finance Lindsay Tanner. Stephen Conroy, the Minister responsible for the NBN wasn’t even close to making the Top 20, despite it being clearly the main federal issue, along with asylum seekers, post-election. 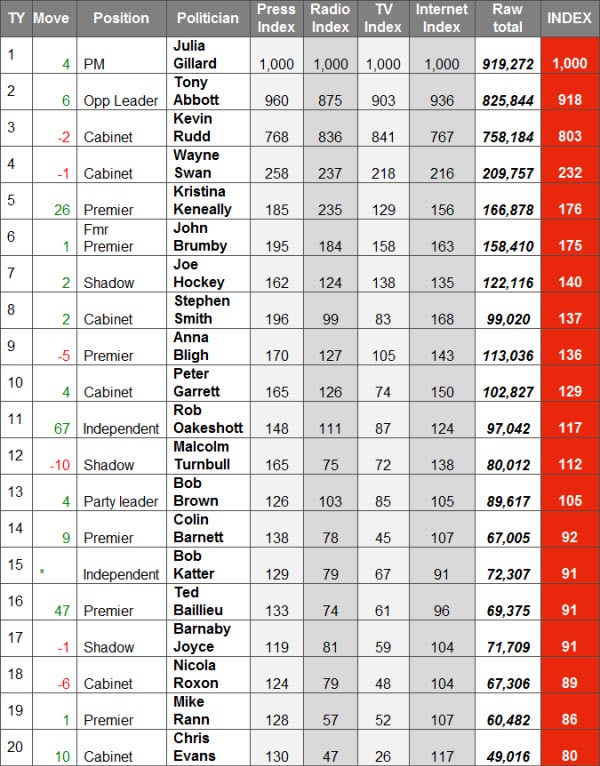 Lots of daylight between the three main protagonists for 2010 and the rest, although Peter Garrett did get a fair shellacking early in the year over the insulation issue and the Premier of NSW was always going to be there or thereabouts.

Now before you complain — this has actually been picked scientifically — as appalling as it is, Tiger was the most mentioned non-politician in the Australian media for 2010. Now if that doesn’t deserve some yuletide greetings for our wonderful media, gor love ‘em, then nothing does. So Happy Holidays meeja! — and we’ll still be here for you when you get back some time around Australia Day.