WikiLeaks update: when a public official falls from grace

Today's WikiLeak cables chart the fall of powerful Brazilian politician and US embassy contact José Dirceu. Luke Miller rifles through the latest document dump to paint a picture of Brazilian politics in crisis.

The Brazilian military coup in 1964 saw Dirceu join the armed communist revolutionaries. He was exiled until 1980, on his return helped found the Partido dos Trabalhadores (PT) political party, oversaw its rise to power in Brazil, and was chief-of-staff for the president in 2003-05 before being ejected from the Brazilian Congress for corruption in November 2005. The Mensalão scandal, as it was called, saw the ruling PT party paying a monthly bribe to coalition partner MPs for their votes, and Dirceu was described as the main co-ordinator of the program.

The cables cover a 17-month period where Dirceu goes from being, according to one cable, “the most powerful minister in President Lula da Silva’s cabinet”, to a few weeks before his expulsion for corruption, where he requests permission to come to the US “for the purpose of decompressing, working on a book and learning English”.

The first cable from March 2004 sees the US Envoy and Dirceu discussing the “deteriorating situation” in Venezuela and Brazil’s opinion of Cuba, Argentina, Bolivia, Haiti and Colombia. Dirceu noted that since the G15 meeting in Caracas, President Lula had “not returned any of Chavez’s calls … but that he would probably do so soon in order to keep the communication open, as unpleasant as it may be”.

On Argentina, it is “not clear” the government there has a plan “for extricating the country from its economic woes” and so needs to “‘slay a lion’ every week to stay out in front of impending crises”.

The second cable, seven months later, sees “an affable and candid” meeting with the president’s “right-hand man”. Amidst much back-slapping, Dirceu stressed that he was “personally responsible” for Brazil’s public-private partnerships drive to boost investment and employment. The main sticking point in the relationship was Brazil’s tardiness on conforming with the nuclear non-proliferation act, but Dirceu assured the ambassador Brazil was “95 percent there”.

Six months later, in April 2005, the ambassador reports on a lunch with Dirceu, where relations between the nations have decidedly cooled. “Jose Dirceu remains Lula’s most important advisor, despite some waning of his influence,” the Ambassador notes in the cable. When Dirceu declared, as he had done six months earlier, that bilateral relations were “at their best level since World War II”, the ambassador “demurred on agreeing with this”.

The US government was underwhelmed by President Lula’s “apparent reluctance … to openly refute or criticize Chavez’s most outrageous comments”. Dirceu did not respond directly to the accusation of a “strategic alliance” between Brazil and Venezuela. Dirceu announced he was “traveling to Caracas in the next few days to meet Chavez, and is carrying a blunt message vetted by President Lula. The key points of the message are: — ‘Stop playing with fire…'”.

The second last cable, two months after the scandal has broken, has the title “Brazil Corruption Scandal Update: Jose Dirceu Reflects”. Despite the former high flier being “‘too hot” for direct contacts with mission personnel”, the US embassy was able to use Special Advisor Bill Perry “who was in Brazil in a semi-private capacity … to gauge Dirceu’s views on the political crisis and his own predicament”.

Dirceu was “much less combative” than in a previous post-scandal meeting with Perry and was “resigned” to suffering “the revocation of his congressional seat”, although he considered it “unjust”. He called the bribery a “hair-brained and perverse” scheme in reaction to “mercenary” minor coalition parties, and partially blamed President Lula for not “cultivating legitimate corporate funding sources in the wake of 2002 elections”.

Perry noted that Dirceu “disassociated himself utterly from any blame for the scandals engulfing his party”, but given Dirceu’s career and power, this was “ludicrous”. The cable concludes with: “Dirceu’s departure from the political scene would be a watershed, closing out a distinctive chapter in modern Brazilian politics. Yet we cannot quite bring ourselves to believe that this ruthless and brilliant chameleon is willing to go so quietly into the night — not just yet.” 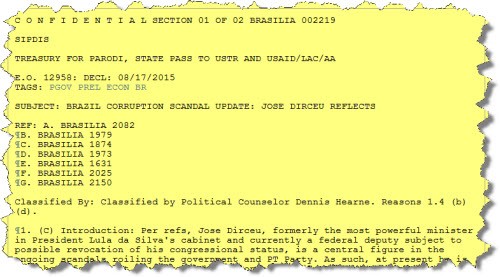 In the final cable about Dirceu, four months after the scandal had destroyed his career, and one month before his official ejection from the Brazilian Congress for corruption, José Dirceu attended a lunch with US representatives. The official was struck by how far Dirceu had fallen, noting that even though important internal PT party elections were being held that day, “his cell phone only rang three or four times”.

On the topic of “re-radicalization of the Brazilian left over the mid- and longer-term”, Dirceu said it would not happen, as he was “the only one who could carry off such a volte-face, but he had no intention of doing so because of the kind of person he is and the fact it would be bad for the country”.

Discussing the scandal and his own role in it,  Dirceu “admitted that he himself had habitually spent twice what he had reported on his own campaigns and that all Brazilian politicians employed some form of caixa dois (unaccounted or unreported funds)”: “His strategy now is to keep his head down and work to maintain the enduring influence he still retains within the party.”

As a final comment on their former high flying friend, the US embassy noted that “Dirceu strongly reiterated his interest in coming to the United States during the December-February period for the purpose of decompressing, working on a book and learning English. For the first time, he began making concrete inquiries about such practical matters as, for example, a visa, where he should stay in the U.S., and what he should do there.”

The US embassy official “was non-committal but promised to talk with him again”.