The seedy year of the sports star, the smartphone and social media

Once there was a time when a sports star, from any code, could undertake any type of unseemly act, be it with human or animal, and be safe in the knowledge that the chance of it becoming public was remote.

Once there was a time when a sports star, from any code, could undertake any type of unseemly act, be it with human or animal, and be safe in the knowledge that the chance of it becoming public was remote.

It was a time before iPhones and Twitter and Facebook, where a sex scandal, and whether it ever became a story, was at the call of the humble newspaper editor or TV producer.

In sex scandals past you’d need to be “unlucky” — say Dwight Yorke and Mark Bosnich unlucky. The two Aston Villa stars made a VHS video (remember them?) in 1998 with four women only for “Joe Public” to “find” the video in Yorke’s garbage and hand it to UK tabloid The Sun.

Or even earlier, say back to 1972, when a surprised American media found out via press conference of the wife swapping and subsequent dual divorce of New York Yankees players Fritz Peterson and Mike Kekich. In this case there was no video evidence and all parties concerned were reportedly amicable.

Today, the AFL and the St Kilda Football Club are reeling, after allegedly compromising photographs of several Saints players were made public yesterday on Facebook and later, Twitter. A 17-year-old Melbourne girl, who claims to be the source of the photos, published the photos in question yesterday to the popular social networking sites only for the claims to be refuted by St Kilda captain Nick Riewoldt in a press conference this morning. 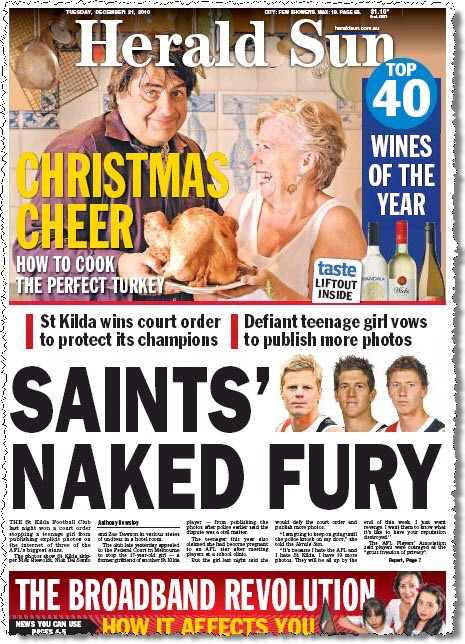 The photos have now gone viral and despite a Federal Court injunction that ordered the Facebook and Twitter accounts in question to be deleted, countless people in Australia and around the world have received the photos by email, Facebook, through websites or Twitter.

According to Peter Bartlett, a Partner at law firm Minter Ellison and a media law expert, in cases such as the latest St Kilda scandal where photographs — once posted on sites such as Twitter and Facebook — go viral “it’s difficult to gain an injunction and even more difficult to enforce the injunction.”

“There are so many social media sites available and many of these are sourced from overseas …or the corporate entity controlling them are outside the jurisdiction of Australian courts,” said Bartlett. “It is possible to obtain an injunction against such sites but when the controlling entity is outside the jurisdiction of the court it’s difficult to enforce an order with an uncooperative site.”

Sites such as the extremely popular BigFooty are inevitably involved when such news breaks.

Adrian Appleyard, BigFooty‘s Community Manager told Crikey that “BigFooty is a US-based platform on which people publish their own material, for which they are responsible. There are rules about how people may use the platform, including some imposed by the web site host, but within those rules they can publish what they like on one of our hundreds of themed boards. WikiLeaks is generating a lot of discussion on our Politics board, for instance.”

“We strive to be reasonable human beings and if an issue like this blows up moderators will sometimes lock threads and check with our Admin team whether they would damage the site as a whole — ten thousand angry fans arguing over one issue tends to make the place less conducive to normal interaction between users, no matter what the issue is.

“In the current case, Admin worked out the photos are everywhere and don’t contravene the rules (if the naughty bits are covered) so they are not taking any action.”

The St Kilda incident is the third case this year of sports stars being exposed in this manner.

In August, US sports blog Deadpin revealed that in 2008 New York Jets journeyman quarterback Brett Favre had sent numerous voicemails and photos of himself to in-house sideline reporter Jenn Sterger’s mobile phone. Once again, the photos went viral forcing Favre to admit ownership of the voicemails but denying the “cockshots”. But the damage was done — cue Taiwan’s Next Media Animation video and a series of Conan O’Brien jokes.

And more recently, in early November, Canberra Raiders star Joel Monaghan was forced to quit after photos emerged via Twitter of a dog performing what appeared to be a sexual act on the star centre. He no longer plays Rugby League in Australia after signing for Warrington Wolves in England.

So what’s the remedy for this crass cocktail of seedy acts, smart phones and social media? Legally, it appears that whatever protection these sport stars may have is scant and hard to enforce.

Perhaps they should refrain from finding themselves in compromising situations to begin with, no matter what sport they play and whichever mammal they’re accompanied by.

Which social media do Australians use most?

Life just got a little harder for Mark Zuckerberg

I have supported the Saints for many years and even without seeing the photos I’m wondering WHEN was it a good idea to be photographed with your mates naked? It’s stupid enough for a non-AFL player, but must be the height of stupidity when you’re a role model to so many people, many of them impressionable children who idolise these guys. Sure there is pressure on athletes who are the constant focus of public attention, however it’s not as though they are unaware of the scrutiny applied to them (Saints players maybe have a look at the Wikileaks site if you think you’re safe).
If you have the misfortune of being linked to the Saints Facebook forum you can witness first-hand the hysterical, hateful, unmoderated bile of the supporters who are baying for the photographer’s blood (the level of personal insult is disgraceful). If anyone from the club is reading this you should ensure when you post a controversial release on your site and invite comment that you at least do not end up promoting hatred and insults (there have even been attempts to publish people’s personal details, place of work and phone number).
The whole thing has made me a little sick to think I might be standing beside some of these people at a game.

I have received the photos (virally) and I must say that Nick Reiwoldt was very stupid in making the following statements: ‘‘To infer that I would stand there and pose for a photograph naked knowing that it was going to be kept is just absolute garbage and offensive,’’ “He said the photograph was taken after he got out of bed, and he asked Gilbert to delete the photograph immediately.” Let me tell you, he is absolutely posing for these photo’s and is the only one naked in the room at the time of the photograph being taken… it’s generally not a good look.

Liz A, you make a very good point – Nick is clearly posing for the photo. His denial at the presser this morning leads me to the unfortunate conclusion that we will never know the truth about the photos – where they were taken, who took them, were they stolen from someone’s laptop etc etc…
The Saints are going for the standard complete denial that footy clubs automatically reach for when faced with scandals like this, and what follows is just ugly. Enough people idolise footballers that the messed up teenage girl at the centre of this is already being made the villain.
I love football, I love St Kilda. But I’m just so sick of hearing about totally innocent young men and culpable, conniving women taking advantage of them all the time.

Or, perhaps we could all just grow up, and realise that nudity is nothing earth-shattering.
After all, we’re all born naked, and we’ll all die naked, so a bit of nudity in between isn’t going to kill anyone!

This incident should cause current AFL players (and most likely other sporting codes, but I’ll stick with the familiar) to reconsider what has been til now one of the perks of their profession – copious amounts of casual s-x.

Surely, the long-term risk of the capture and upload of compromising images (or worse, video) after a brief dalliance is now far greater than any short-term ‘reward’. Consider the revaluation of trust – perhaps there’ll be an increase in the proportion of players in long-term relationships?

It’s just a pity that it will be self-interest which caused this behavioural shift.