In today's Media Brief's: Christmas is coming to subs at The Age, Gremlins returned to the ABC control room, Jay Rosen names the best articles of 2010....by him and more.

Lucrative lunches for Age subs. Fairfax Media is on the brink of issuing a six-figure Christmas bounty to production staff who were short-changed for years by a roster stuff-up. Despite a clause in their employment contract stipulating that breaks of less an hour would be included in paid time, features subs on The Age mistakenly had their lunchtimes deducted beginning in 2002. When workers finally arked up, the Media Entertainment and Arts alliance stepped in to claw back the cash.

Crikey understands that some are owed over $30,000 for the unpaid lunches, that should have been included in salaries. A summary of the landmark claim, obtained by Crikey, lists the 19 Age staff in line for the bonus moolah, with the union engaging crack law firm Maurice Blackburn to prise open the company’s coffers. “We are seeking their agreement to pay the claim in full,” MEAA state secretary Lousie Connor wrote in the email. “Should they not accede to our request, we will then proceed to court.” — Andrew Crook

Weekly lost in the mail. Melbourne real estate watchers were left wondering what had happened to their usual dose of house p-rn last week when key editions of struggling suburban glossy The Melbourne Weekly failed to arrive on doorsteps. The Fairfax eastern suburbs flagship is losing — according to Crikey‘s calculations — between $3-5 million each year, and the media giant is believed to have temporarily stopped the presses to save money on printing products. In addition to the main edition, the Bayside, Port Phillip and inner north masthead Melbourne Times Weekly also didn’t show up, with insiders speculating whether management had decided to pull down the shutters for good. As documented throughout 2010, the Weekly group has been emaciated by a real estate revenue raid from arch rival The Weekly Review, with Fairfax shareholders copping losses of hundreds of thousands of dollars a week.

Crikey understands that Melbourne Weekly staff were told to take time-in-lieu as it became clear last week’s edition wouldn’t run. However, yesterday, a new edition dated December 22 appeared online with a farewell message from editor Alison Dean, who quit on December 8 within hours of chief-of-staff Christie Peucker, as reported by Crikey. Observers say both had become dismayed at the lack of attention paid to editorial by general manager Colin Moss as the red ink flowed.

Fairfax’s Victorian real estate mastheads suffered a near-fatal body blow in March when former Age marketing director Antony Catalano poached the majority of his old firm’s advertisers following the expiration of his non-compete clause. There is now speculation that Fairfax, reeling from a permanent hit to its profits of about $10 million, will be forced to make an humiliating takeover bid for Catalano’s Metro Media in 2011 to staunch the wound — effectively buying back their own advertisers. Freshly-minted Fairfax executive Greg Hywood worked closely with Catalano during their days at The Age, however the extent of their contact in recent months is not known. — Andrew Crook

News 24 goes dark, yells at viewers. Gremlins returned to the ABC control room yesterday, forcing a mad dash between studios and some unfortunate back-stage comments put to air. As TV Tonight reports it, ABC News 24 disappeared from the screen entirely about 4pm yesterday. After a good 15 minutes of blackness the screen burst to life with ABC promotions and pre-taped segments.

Presenter Tracy Bowden was apparently sprinting upstairs from the News 24 studio on the ground floor of the ABC’s Ultimo centre to the Sydney news set upstairs. But things didn’t quite go to plan there, as Media Monitors recorded for Crikey… 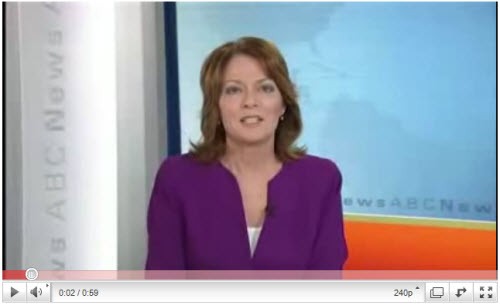 Was this yet another gaff from the ABC’s expensively outsourced MediaHub operation?

Worst PR missteps of 2010? It’s the list that leaves Samantha Jones wannabes shuddering in their stilettos — the list of Australia’s Biggest PR Disasters of 2010. Annually rated by self-described ‘PR watchdog’, the website PRdisasters.com, the Top 10 lists the brands and personalities who put the proverbial foot in it in 2010 — to the detriment of their celebrity, company and commercial success. As the criteria strictly states, an incident must receive “sustained, negative media coverage for the brand, business or person at the centre of the story”.

Coming in at No.10 was Lara Bingle, who fell victim to Brendan Fevola’s candid camera earlier in the year, eventually culminating in her split from that other dog, Michael ‘Pup’ Clarke. David Jones top out the No.9 spot after news of Mark McInnes’ sexual harassment charges broke, only just superseded by ex-X Factor host Matthew Newton, who took out No.8. Embattled airline Virgin Blue earned the No.7 place on the list following a crippling computer crash, but couldn’t outdo No. 6’s Joel Monaghan, who obviously skimmed over the ‘no bestiality’ clause in his Canberra Raiders contract.

Continuing the sportsperson trend, Stephanie Rice and her “f-ggots” Twitter post came in at No.5, joined by the both Melbourne Storm NRL team and their bloated salaries, occupying No.4. With possibly the best numerical result they’ve received all year, the Labor Party was No.3 on the list thanks to the botched ‘negotiations’ with industry leaders over the proposed mining super profits tax.

At No.2 was the Commonwealth Bank, who incurred the wrath if mortgage holders and the ireful Glenn Stevens by hiking up interests rates beyond RBA levels. But, flying in at No.1 … Qantas and its magical, exploding fleet of A380 planes. A victory well won, undoubtedly — time to get those singing kiddies limbering up for another ad campaign, perhaps? — Crikey intern Alexandra Patrikios

Dogless Dougie has his day. It’s almost too good to be true — splashed across the nightly news and newspaper sites last night was the heartbreaking story of “Dougie Walker”, a homeless Melbourne man who temporarily lost his beloved pooch. Distraught without his buddy “Hooch”, Dougie’s story quickly made it to the top of the news pile. Luckily, a Melburnian good Samaritan saw the story online and helped police reunite Dougie with his four-legged friend. 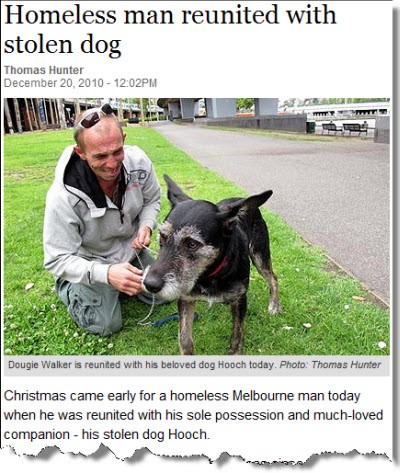 “According to The Guardian, Mark Thompson, director general of the BBC, told an audience at a seminar on impartiality in broadcasting that Murdoch ‘had told him he would like Sky News to go down a polemical Fox-style’ route — but that the editors of the channel had brushed off his wishes.” — The Huffington Post

“The most-emailed articles list on the New York Times website is one of the Internet’s key barometers of news and trends, an …Thus, careful watchers might have been puzzled by a seemingly out-of-place story last week. Among the latest news, feature and opinion pieces was a three-week-old science section story about a soon-to-close exhibition on cuneiform clay tablets. What could have propelled a stale, bone-dry story to the top of the Internet’s importance arbiter? I can tell you: It was me.” — The Daily Beast

“As a year-end review, I put into one post my best stuff from 2010. (In chronological order.) Naturally I would be grateful for any year-end comments you may have…” — PressThink

Croquembouche King gets own show

“Another MasterChef guest has landed his own series, this time patissier Adriano Zumbo with SBS. Zumbo was most memorable with his macaron tower, followed by his croquembouche and a 5 green Pear Perfections in Junior MasterChef (which was bettered by 12-year-old Jack). His new series, Zumbo, will be a 6×25 series produced by Fredbird Entertainment.” — TV Tonight

“Motorola has thrown down the gauntlet in the tablet wars: a new ad for the upcoming Motorola tablet takes potshots at the iPad, calling it ‘a giant iPhone’, and the Samsung Galaxy Tab, which is criticized for running a version of Android for the phone.” — Business Insider SAI