The latest of the WikiLeaks cables, including startling news that the Vaitcan is "quietly supportive" of biotechnologies such as GM good as a solution to world hunger, the Panama Canal expansion project was a "disaster" according to the Vice President of Panama and news that Colombia fears a Falklands Islands-style war from Hugo Chavez's Venezuela.

The latest of the WikiLeaks cables, including startling news that the Vatican is “quietly supportive” of biotechnologies such as GM food as a solution to world hunger, the Panama Canal expansion project was a “disaster” according to the Vice President of Panama and reports Colombia fears a Falklands Islands-style war from Hugo Chavez’s Venezuela.

In a meeting with US officials, the Vatican’s “point person on food security and biotechnology”, James Reinert, told US officials the Roman Catholic Church was “quietly supportive” of biotechnologies such as genetically modified food as a solution to world hunger but was keeping a low-profile since “not everybody in the Church is comfortable with them”. America, with a large number of investments in GMO foods, would “continue to lobby the Vatican to speak up in favour of GMO”.

The US mission in Paris recommended the US threaten “retaliation” against Europe if it continued to use “common interest … combined with the precautionary principle” to block genetically modified food such as Monsanto’s MON-810 BT corn. The corn, marketed under the name YieldGard, was banned in most EU countries as part of a “roll back” on agricultural biotech, and the US was concerned this was a “precedent with implications far beyond” corn cultivation.

Proposed new French laws would make “biotech planting impossible in practical terms”, and the US could apply pressure by creating a “retaliation list that causes some pain across the EU since this is a collective responsibility, but that also focuses in part on the worst culprits … measured rather than vicious”.

Writing on Mexican President Felipe Calderon’s attempt since taking office to repair ties with Venezuela, the US embassy in Mexico City noted Venezuela’s recalcitrance and attempts to “spread the revolution” as the main blocking points.

“Analysts from the Mexican National Intelligence Center (CISEN)” had identified “some 500 serious Bolivarian activists” operating inside Mexico, but there was no evidence Venezuela was funding Mexican politican candidates. Instead, Venezuela “seeks to woo Mexicans via social handouts to impoverished groups”. The benefit to Mexico’s rapproachment with Venezuela was to assist Mexico’s strategy of gaining “a leadership role in the region”.

The Vice President of Panama and potential presidential candidate in 2014, Juan Varela, told the US Ambassador that “the Canal expansion project is a disaster”. He blamed the GUPC Consortium for the problems and “expressed his dismay” the same companies were bidding for the Panama City Metro Project. “In two or three years,” he continued, “it will be obvious this was all a failure.”

President Martinelli was also “a bit worried” by the Consortium, which underbid their nearest competitor for the project by a billion dollars. He said “Canal Administrator Aleman might have tipped the bid toward the consortium that included CUSA, which is run by his cousin Rogelio Aleman”. 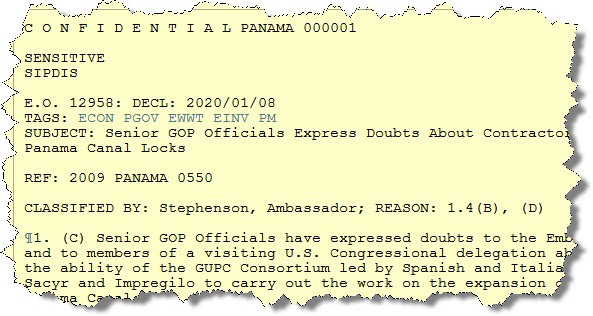 “Colombian officials and observers are increasingly concerned about the long-term threat Venezuela poses to their country. Experts inside and outside the government worry that any small incident along the tense border could spark a costly confrontation, given the decrease in communication and increase in tension between the two countries. Most believe the main risk comes from an unintentional incident, although influential GOC advisors claim to be equally worried that President Chavez could start a war to distract Venezuelans from their economic woes.”

“Poorly trained and undisciplined” Venezuelan troops on the border combined with an “atmosphere of mutual recrimination and doubt” and the “unpredictability” of Chavez during an economic crisis reminded Casa de Nario insiders of “Argentina’s 1982 seizure of the Falklands/Malvinas Islands from the United Kingdom”.

“The US mission in Paris recommended the US threaten “retaliation” against Europe if it continued to use “common interest … combined with the precautionary principle” to block genetically modified food….”