A Swedish legal activist has told Crikey that police interviewing the two women accusing WikiLeaks founder Julian Assange of r-pe and s-xual misconduct did not follow the recommended procedure for s-x crime investigation.

A Swedish legal activist has told Crikey that police interviewing the two women accusing WikiLeaks founder Julian Assange of r-pe and s-xual misconduct did not follow the recommended procedure for s-x crime investigation. According to Göran Rudling, who has seen the police report of the first interviews, there is no full record of the first and most important interviews.

“The police did what is known in Sweden as a ‘konceptforhor’, a summary of the interview,” Göran Rudling told Crikey today.

“This is where the police simply make general notes on the statement being given. Since the interview was not recorded nothing of what the women actually said is recorded or registered. This makes it impossible after the fact to ascertain what’s actually been said.”

The revelation comes at the same time as stories based on a circulated copy of later interviews hit the press in the UK and Sweden. In Sweden, brief reports were carried by Expressen, the right-wing tabloid to which details of accusations against Assange had been forwarded literally minutes after they were first made, and picked up by the UK Mail on Sunday. 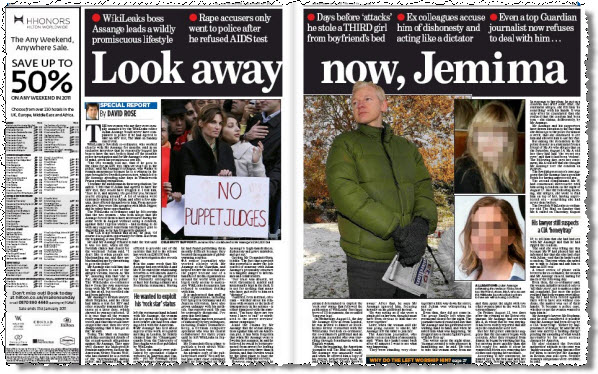 However The Guardian carried a long report by Nick Davies, based on a copy of a later police report, and interviews with WikiLeaks’s former Swedish representative, a man they called “Harold”. The report adds little to three of the four accusations against Assange (see my timeline), but has further detail on the first accusation, that Assange pinned down one of the complainants, and prevented her from applying a condom during s-x.

Davies reports that the police report also contains statements from two friends of the first complainant, Anna Ardin, who say that she reported that Assange had tried to have unsafe s-x against her wishes, that the s-x had been violent, and that she did not feel safe in continuing a s-xual relationship with Assange.

The report leaves a complicated picture, as Ardin later told Aftonbladet newspaper that “Assange is not violent and we do not fear him”, and remained the press contact for him for a week after the alleged incidents. Blog entries giving a different account of the weekend were later deleted from Ardin’s blogs as were several tweets.

There are also accusations that the incident which is being investigated under the criminal heading of “s-xual coercion” rather than r-pe was added to the later report, after earlier investigations of r-pe were rescinded by prosecutor Eva Finne. However the paucity of the initial police report makes this difficult to establish.

Police recommendations for s-x crime complaints were changed in 2005 following an inquiry into how r-pe investigations are presently performed. It was found that almost all interviews were recorded as mere summaries, which fell below minimum reporting standards.

As part of this audit of police procedure, a series of changes regarding the handling of complaints involving “oath vs. oath” reports was recommended, to allow for the frequent absence of forensic or corroborating evidence.

Among several key recommendations directed at r-pe investigation were that investigations be conducted speedily, that the interview be recorded, preferably on video, that complainants make a “free” and unsummarised statement prior to detailed questioning, and that all hearings be in person.

“None of these recommendations were followed,” says Rudling, who is campaigning for an overhaul of Swedish s-x crime law.

“The police reports shows that the first full interview with complainant A was conducted by phone on the day after order of arrest. We don’t know what questions the interrogators asked and what they decided to ignore. And we can’t know what the interrogators found to be of importance. If the police didn’t ask questions about a specific issue they cannot know anything of that particular issues. It is most important to look for what is left out in an interview.”

Rudling, whose website features debate on the recently introduced s-x crime laws, is also concerned that there was a lack of standard checking procedures in the interview procedure.

Commenting on the issue, Assange’s lawyer Mark Stephens told Crikey, “this is just one example of how irregular this process is … some of the interviews with the women were conducted over the phone and written as narrative statements by policemen and not as transcripts of the women in their own words as is preferable and apparently required.”

Assange is currently on bail, with an electronic tag, at the home of journalist Vaughan Smith. Hearings in the extradition process, which he is opposing, are set for January and February.

Rundle: timeline of Assange’s visit to Sweden and events that followed

Police had links to Assange accuser

Rundle: ringside for Assange’s court appearance, in all its gory detail

The movable standards charade continues, as the usual suspects who normally will bitterly condemn ANY suggestion female victims’ stories even be queried, now [because Assange is a ‘noble’ cause?] make NO comment re the campaign to discredit the two women.

it’s a smear CIA style. I don’t care if he lives like the average rock star. I care about the free speech for secret govt business funded by big corporations who bought out democracy a long time ago.

Sure it’s not the Martians, Tom? Oh that’s right, you wouldn’t care.

The women have been sucked into this power play as well. JA may act like a bass player on tour, the girls may have thrown themselves at him unwisely but the disproportionate vigor of the persuit speaks volumes about the real motives of the prosecution. The girls are just pawns – their vilification is as disgusting and should stop. BTW Rundle has not done this.

Jesus H Christ why is my real email set as the default on a profile I didn’t know I had? Andrew – please fix!!!