Time for newspaper readers in Queensland and South Australia to get more intimate in their News Limited experience. Plus, Larry King left his CNN desk last week. Our friends at NMA TV, naturally, pretty much summed it up ...

News gets touchy-feely elsewhere. Time for newspaper readers in Queensland and South Australia to get more intimate in their News Limited experience. New iPad applications — proudly marketed as as opportunity to “touch the news that touches you” — have been launched for The Courier Mail up north and The Advertiser down south, joining The Daily Telegraph and Herald Sun in the iPad pool.

The Sunday Mail (The Advertiser‘s weekend partner) got so excited about the launch yesterday it poked a hole in the space/time continuum by, shamelessly and a little confusingly, publishing a photo of an iPad on its print front page. (Hint: you can’t touch this version, no matter how much it touches you.) 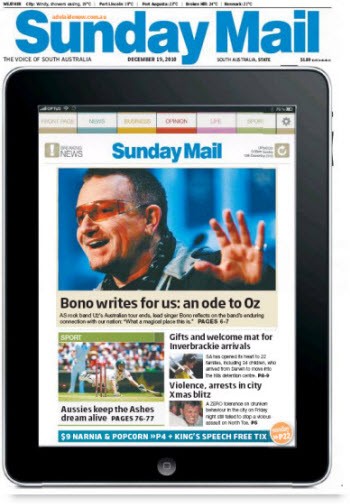 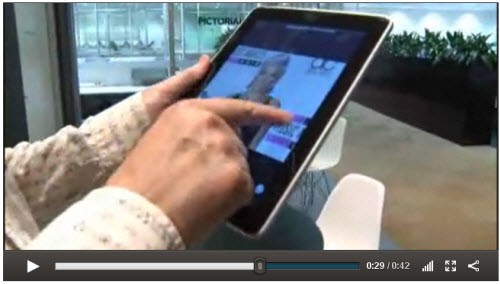 As for how the publishers will manage their multimedia content, a press release dispatched to Crikey this morning explained: “The printed newspaper will remain the once a day flagship news diary; the website will continue to focus on breaking news; and the iPad will straddle both, with two editions each day, videos, photo galleries and the ability to be updated as news breaks.” Get touching, folks. — Jason Whittaker

The King, crippled, abdicates. Larry King left his CNN desk last week. Our friends at NMA TV, naturally, pretty much summed it up … 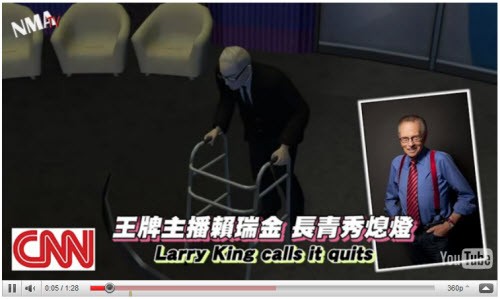 “Instead of bringing out the best, the makers take a more misanthropic (and certainly misogynist) approach, readily sacrificing their characters’ integrity to get ‘wow’ moments or plot twists.” — The Spy Report

US viewers led astray by TV news during election

“News organisations can educate voters about public policy and economic conditions, but they can also misinform voters. As if to prove the point, a study released Friday found that ‘substantial levels of misinformation’ seeped out to the electorate of the United States at the time of the mid-term elections this year.” — The New York Times

“When the Russian investor Aleksandr Lebedev took over two British newspapers and named his son, Evgeny, to oversee them, some people on Fleet Street assumed that the younger Mr. Lebedev would simply add ‘publisher’ to the long list of pursuits that occupy the offspring of Russian billionaires in London: restaurateur, hotelier, art collector, philanthropist, fashionista and dater of famous actresses, to name just a few in his case … Instead, Evgeny Lebedev appears to have embraced the job of running The Evening Standard and The Independent with considerable commitment.” — The New York Times

The case for public broadcasting: maybe the BBC should face cuts

“The enticing narrative of media conflict encourages us to pick sides, but it would be better to view the issue holistically. The truth is that the BBC, alongside all public broadcasters, needs its enemies. Cuts may even be good for it.” — The Guardian

“Given the notoriously icy ‘editrix’ of US Vogue Anna Wintour once dismissed Sienna Miller as ‘toothy’, it seems unlikely that she was crying into her designer water yesterday following the news that her fierce rival at French Vogue is to stand down.” — The Independent

“MSNBC’s Keith Olbermann, not a stranger to controversy, has found himself in hot water on Twitter lately. Amidst a whirlwind of accusations that he was callous towards r-pe — in response to a guest he had on Countdown and some links he posted to Twitter pertaining to Julian Assange’s recent trial — Olbermann has announced that he is suspending his Twitter account until the ‘frenzy is stopped’.” — All Twitter

all you need is photo iD..or can be done online..