Perhaps I mix in the wrong circles but I have not yet noticed any surge in anti-boat people feeling.

Sympathy may be winning. Perhaps I mix in the wrong circles but I have not yet noticed any surge in anti-boat people feeling. Among my associates there is a growing sympathy towards people desperate enough to try to get to Australia on fragile wooden boats rather than a demand for our government to take tougher action. And that sentiment is right across the political spectrum.

Bring out a Brit. The pollster Gallup has looked at where in Europe has the greatest proportion of people who would prefer to be living somewhere else. And the winner is? The United Kingdom. 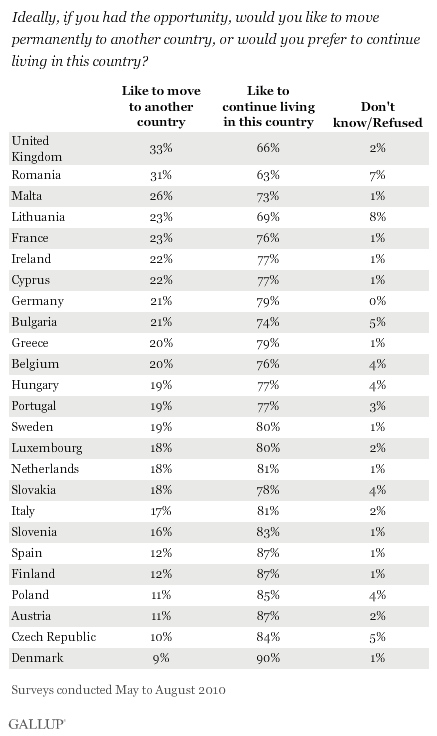 A nice little slap in the face of a colleague. Environment Minister Tony Burke has given his colleague and Peter Garrett a nasty little rebuff by deciding to totally ignore the work the former Environment Minister did on over-hauling Australia’s environment laws. In an interview with the Sydney Morning Herald,  Burke said he had requested fresh advice from his department on the recommendations of the review, which was headed by the former senior bureaucrat Dr Alan Hawke. Burke said he had not asked to see Garrett’s cabinet submission: ”I have only asked the department for advice from scratch.”

Extradited for questioning? In all the stories about the efforts to extradite Julian Assange from Britain to Sweden, the one thing that confuses me are the references to the Swedish prosecutor wanting to question him about offences rather than have him appear in court to answer charges. The Guardian on Saturday attempted to explain but I am still confused. 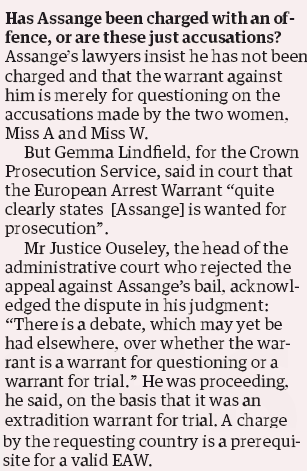 Lay off it, Scott Morrison

Tony Burke – Minister for Sustainability, Environment, Water, Population and Communities? Mr Burke ministers to no such thing – a wolf in sheep’s clothing. A gentleman when as Minister for agriculture, persistently failed to acknowledge the atrocities committed on Australian livestock by barbarians in the Middle East, failed to acknowledge the unspeakable brutality inflicted on export livestock by state handlers on behalf of the Commonwealth and remains callous and indifferent to the fact that 2.5 million animals have been dumped overboard (dead and alive) in recent decades or suffered a lingering death from incineration on an abandoned tub. Meanwhile over a billion people on the planet are malnourished.

“The Labor Party will not tolerate animal cruelty.”

Tony Burke is a gentleman promoting GM crops in this nation despite the ecological and human health hazards of glyphosate and Roundup where the dire ramifications are frequently published by international bodies of scientists – professors of molecular genetics, embryology, biosciences, biology, biodiversity conservation, ecological agriculture, plant genetics and experts from certified GM testing laboratories from Brazil, Argentina, UK, US and France.

Now a neighbouring crop of GM canola has blown across a large proportion of an organically certified property in WA. The contamination has ended up being 293 hectares or 63 per cent of the property now set to lose its organic status.

Why would a founding director of an advocacy training business across Australia and Asia – a lisping industry sycophant be selected for an environment, water and sustainability portfolio?

Glyphosate is the same thing as Roundup. Otherwise, agreed.

Precisely John Bennetts and in January 2010 WA’s Minister for Agriculture and Food, Terry Redman announced an exemption under the Genetically Modified Crops Free Areas Act 2003 to allow cultivation of GM canola. As a result, more than three hundred farmers planted Roundup Ready® GM canola this year in WA. You may find the following paper of interest:

and then ask: “just who is regulating the regulator? “