NT government and police — losing the plot on traffic crime in the bush?

I was interested to see if there has been an increase in the number of traffic matters before the court, particularly since the massive increase in police numbers in remote communities following the NT Intervention in late 2007.

Crikey spent a few days at Yuendumu Court this week, in part because I wanted to follow up on the matters arising from the recent disturbances in this small town 300 kilometres north-west of Alice Springs and also to have a closer look at a couple of aspects of policing and government service delivery.

In particular I wanted to have another look at how the NT police enforce the traffic and driving laws in remote townships such as Yuendumu, where the enforcement of traffic law is of particular importance.

More than three quarters of the NT’s Aboriginal population live in either remote or very remote areas and a far larger proportion of the population (34% as opposed to a national figure of 13%) live in the most disadvantaged socio-economic areas. In addition, the NT has a far higher rate of indigenous native language speakers — 59% — than any other Australian jurisdiction.

And the roads out here — as I’ve noted before — eat cars and trucks. And there are no public transport services.

In the Alice Springs region the Magistrates Court visits most large remote communities every two months. This week the courts went to Hermannsburg and Papunya, spending one day at each, and the largest central Australian community of Yuendumu for two days.

The proportion of traffic-related charges to general offences before the courts (excluding domestic violence applications and DUI offences) in each township this week was as follows:

These figures are but a snapshot — typically any number of matters are held over from previous sittings or transferred to or from other courts. At Yuendumu the recent disturbances in the town boosted the number of general offences before the court.

I was interested to see if there has been an increase in the number of traffic matters before the court, particularly since the massive increase in police numbers in remote communities following the NT Intervention in late 2007.

In per capita terms the NT appears to be grossly over-policed, running at about two and half times as many police per capita than the Australian average. In 2008-2009 there were 1587 serving police officers — equivalent to 716 police for every 100,000 people living in the NT, compared to the national average of 297 per 100,000.

The NT police and government argue that such a disproportionately high figure is justified because of factors unique to the NT. Earlier this year an independent report commissioned as part of the Closing The Gap strategy noted that:

“Remote policing in the Northern Territory involves a large number of comparatively small communities separated by large distances and difficult geographic and climatic conditions. Remote policing also involves working with communities with a wide range of cultural authority and governance and management structures, with many different languages and with highly variable levels of community infrastructure and service provision by other agencies.

“Remote policing is therefore significantly more difficult and costly than urban policing in the NT.”

But others believe that the initial justification for the dramatic post-intervention increase in police numbers in the NT, coupled with the moral panic created by the media and fanned by opportunistic politicians and their camp followers — has resulted in a fundamental shift in the nature of policing in the NT and has politicised criminal behaviour previously considered as minor.

This may be particularly so in the remote townships of the NT, where it could be argued that the initial justification for the NT intervention — to protect women and children — was “oversold”, leaving remote townships with a large cohort of new and relatively inexperienced police officers.

These officers now operate in townships with relatively little serious crime — particularly crimes of violence or abuse against women and children.

This raises the question — what policing do they do?

I’ve had a few looks at the operation of the courts at Yuendumu in the past (see here, here and here). In October 2008 I noted the high proportion of traffic offences as against other criminal matters:

“…74 defendants facing a total of 252 charges – an average of almost 3.5 per defendant. The raw totals include 76 alcohol-related charges, 93 relating to use of a motor-vehicle, 39 charges (at least) arising from two days of September rioting at the nearby township of Willowra and a grab-bag of 44 assorted criminal charges.” (emphasis added)

Thalia Anthony is a legal academic from the University of Technology, Sydney, who has conducted research into the administration of the criminal justice system in the NT, particularly in remote townships.

Earlier this year she presented a paper to a criminology conference in Alice Springs on her research that will be published in Law, Text Culture in the new year.

She noted that, in relation to the broader aims of the NT intervention:

“There has been no evidence that increased policing has had any impact on s-xual offences … The Senate Select Committee on Regional and Remote Indigenous Communities concluded that it was ‘too early to tell whether the increased police presence was preventing crime in the prescribed areas’.”

Anthony goes on to describes the criminological phenomena known as net-widening in terms of the NT intervention and increased policing of traffic “crime”:

“The offence type that police have captured effectively is driving offending. The increase in driving offences … can be likened to a criminal net being thrown more likely … The notion of wider, denser and different criminal nets resonates with the Intervention. More policing in Indigenous communities has had the effect of increasing surveillance over all Indigenous lives … The largest single crime category in prescribed communities is driving and the police can easily detect them due to their public visibility. Many drivers were not previously criminalised bec

ause police showed some flexibility to driving on Aboriginal land…the police create the impression that they are ‘doing something’ to justify their presence.”

Anthony conducted an analysis statistics from NT police annual reports between 2003/4 to 2008/9, noting that in the two years before what was to become Operation Themis “driving offences were steady and even reducing in some instances” but that “[S]ince mid-2006, there has been a 250 per cent increase in police investigations of driving offending across the Northern Territory.” 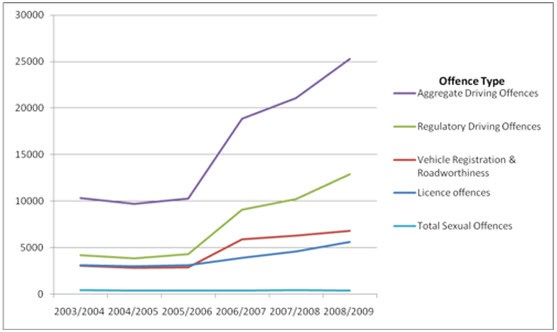 As magistrate John Birch, who conducted the Yuendumu Court this week, told Crikey in 2008, traffic and driving issues out bush are complex and multifactoral:

“… we all rely very heavily on cars, but there just aren’t the facilities for people to undertake driving programs, to do the drink-driving course, to even have the wherewithal to apply for a driver’s licence. Perhaps if we looked at having something in the communities that encouraged people to get their driver’s licence in the first place and to place some value on it, then we might not see this high rate of traffic-type offending … even if they are aware of it (many Aboriginal people) may not properly understand it. And of course the penalties for driving a car uninsured are extremely high here in the Northern Territory. It’s over $500 for a first offence and over $1000 for a second time, and we’ve already talked about people’s capacity to pay fines, and for someone to have to pay a fine of over $1000 — it is a lot of money — it’s a lot of money whether you live in Sydney or live at Yuendumu. It can cause quite a lot a hardship for people.”

And it seems that little has changed in the past two years, other than that the fines for traffic offences have increased.

Henry (not his real name) appeared before Magistrate Birch at the Yuendumu Court this week facing a trifecta of charges (drive unlicensed, drive uninsured and drive unregistered) arising from a trip between Yuendumu and the small township of Haasts Bluff, 150 or so kilometres away on the dirt back-roads that criss-cross the desert.

Henry and his wife were travelling to Haasts Bluff to attend his nephew’s funeral.

Henry is a 61-year-old pensioner and grandfather many times over and was driving his car that, in facts tendered to the court, lacked effective front seat belts, had no windscreen wipers, cracked headlights, bad brakes and a bald tyre. Henry’s lawyer told the court that, in the tradition of the best of Warlpiri Bush Mechanics, his client admitted that while “everything” on his car was “broken”, the “engine was a good one”.

Henry’s sole income is $300 per fortnight in cash and a further $300 in income quarantined to his BasicsCard.

‘My name was used telling lies’: the media come to Yuendumu

I agree with the general argument that the Northern Territory and particularly Indigenous Australians in the NT are over policed. But before one can even start considering whether Henry was over sentenced one needs to know his priors and whether he was represented well.

Gavin – he was represented, on a guilty plea, by a solicitor from CAALAS, the Aboriginal legal aid agency in Alice Springs. From my understanding the fine was made up of the mandatory minimum fine for each offence (I may be wrong but that information was not available to me). And as to priors, as is sadly too common out here he was, as the prosecutor advised “known” to police, though I think his prior record was not such as to substantially affect his sentence.

Thanx Bob. You added a key point that I overlooked and contributes to substantial injustices: mandatory minimum sentences.

Perhaps when “Henry” is dragged into the watchhouse over his inability to pay $1720 in fines and levies in 28 days, he should apply to have his fines and levies deducted from the compensation owed to him for raised prices, reduced wages, and reduced employment opportunities caused by payroll tax, on the ground that the tax, in so far as it applies to labour embodied in goods, is a duty of excise in contravention of s.90 of the Constitution, which stipulates that only the Federal Parliament may impose duties of excise.

It doesn’t matter whether “duties of excise” include all inland taxes on goods, as held by the High Court in Ha vs. NSW (1997), or only those that discriminate against locally produced goods relative to imports, as held by the minority, because payroll tax does indeed so discriminate.

On the constitutional question, “Henry” has the right to seek not only substantive relief but also vindication — by refusing to settle out of court without a public admission that payroll tax is indeed an excise. That still leaves him the option of dropping the constitutional case without prejudice if circumstances changes, e.g. if the NT government has the decency to reduce his fines and levies to something approaching his capacity to pay.

If his application is to be heard in the Magistrates Court, he’ll need to notify the Attorneys-General of all the States and Territories that a constitutional matter is to be raised in that court, to see if they want to transfer it to the High Court. My hunch is that will pointedly ask their NT counterpart whether he really wants to blow up the budgets of all the States and Territories in order to fine an impecunious old man who needed to get to his nephew’s funeral.

Of course the last sentence should read: My hunch is that *they* will pointedly ask their NT counterpart whether *she* really wants to blow up the budgets of all the States and Territories in order to fine an impecunious old man who needed to get to his nephew’s funeral.