A shortage of government debt

I wonder whether shadow Treasurer Joe Hockey will now give a rest to his harping on the horrors of what he describes as excessive government debt?

A shortage of government debt. I wonder whether shadow Treasurer Joe Hockey will now give a rest to his harping on the horrors of what he describes as excessive government debt? If proof was needed of the absurdity of his claim the Reserve Bank and the Australian Prudential Regulation Authority provided it this morning.

In a statement the joint guardians of banking safety outlined special measures they are taking to compensate for there being too few Australian Government bonds for banks to meet new international liquidity requirements. 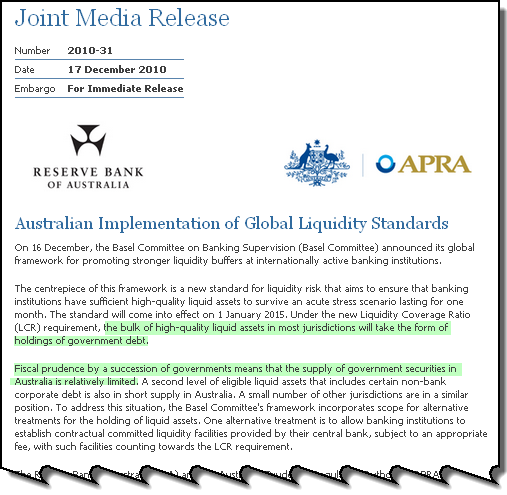 At a conference back in September APRA said Australia’s government debt to gross domestic product will be 12 percent by 2011, compared to 62 percent in the U.S. and 167 percent in Japan.

Naked self interest. Trying to get between a money manager and a fee is producing one of the most blatantly self-interested campaigns against a government that I can remember.

The representative body of the financial ticket clippers, the Financial Services Council, is currently trying to stop the introduction of the proposed My Super scheme that will result in superannuation payouts for ordinary workers being substantially increased while reducing the opportunities for financial advisers to churn out extra fees.

Surely the independent members of the House of Representatives will not be a party to such self-interested lobbying even if the Liberal Party succumbs to the entreaties of the money men.

Telling the truth would be a good place to start. There’s nothing unique about people wanting to better their lot and come to Australia and the prospect of a better life. It is an international phenomenon — Mexicans to the United States, Africans and people from the middle east to Europe. There are hundreds of thousands of border jumpers taking the same kind of risks as those that drowned off Christmas Island this week.

Compared even with our near neighbours Indonesia and Malaysia, Australia is getting off lightly. Patiently and persistently explaining the truth about the problem of international economic migration would be  good place for our government to restart the debate in this country about how we should deal with boat people.

Hardly a surprise. That insignificant Labor backbenchers were gossiping about leadership months before Kevin Rudd was eventually deposed should not come as a surprise to anyone. For most of those not in the ministry there is little else to do.

I am sure they are at it already in speculating who may or may not be the successor to Julia Gillard should things go bad. Hence all the story in The Oz this morning about Labor Senator Don Farrell telling the US embassy a year before the coup that Julia Gillard was “campaigning for the leadership” produced in me was a yawn.

There is a clear, compelling case for Governments to take on debt in order to service GDP growth. Australia’s current debt ratio of around 12% by 2011, is a joke.

There are massive infrastructure projects which are 20 years overdue, which are being held up by both parties’ fixation with the poor economic policy of low government debt, particularly at a time of a once in a century economic boom.