Status update: Mark’s Time has come. He’s the Harvard dropout and, if The Social Network is anything to go by, the most popular loner in the world — and now Mark Zuckerberg’s been named Time magazine’s 2010 Person of the Year. Zuckerberg, who narrowly outscored early favourite Julian Assange (along with other runners-up Afghanistan president Hamid Karai, the rescued Chilean miners and America’s Tea Party movement) to take out the title, features on the cover, skin still faintly mottled, the parting gift of pubescent acne. If he wasn’t quite so rich, it’s the kind of face that wouldn’t appear out of place behind Coles counters, in lolly shops and at McDonald’s drive-thru windows. 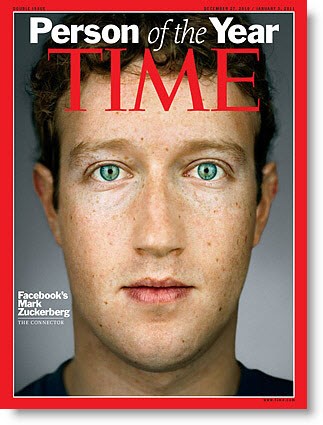 But if history is to be believed, the 26-year-old billionaire might not have cause for celebration. Bill Clinton was named 1992’s Person of the Year, only to have the Lewinsky scandal rock his presidency in 1998. JFK was the 1961 cover boy, two years before he was assassinated. Hitler was the 1938 choice — presumably not a popular pick for the residents of Sudentenland — and, well, we all know how that panned out. Cultural accolade or poisoned chalice? Zuckerberg better keep an eye on those grassy knolls… — Crikey intern Alexandra Patrikios

The joys of talkback. Nothing like a boat full of asylum seekers to get the crazies calling talkback. 3AW in Melbourne had a delightful man named “Allan” (Alan?) calling up hosts Nick McCallum and Justin Smith this morning to talk about the Christmas Island boat crash.

While we don’t think you need to have children or celebrate Christmas to feel empathy for those onboard, at least the hosts — and apparently the next half hour of callers — called Allan out on horrendous views. Including next caller “Kate” who wanted to know how Allan arranged to be born a white male in Australia because surely the Iranians and Iraqi’s and Afghans would love to know. — Amber Jamieson

Kennett’s year in review. Stop press! It’s the news we’ve all been waiting for all year, with bated breath — dumped Victorian premier Jeff Kennett’s top seven events of 2010. Announced on 3AW this morning, Big Jeff let us know what’s been on his radar in 2010 …

Microsoft can’t do anything right. I wish for … asylum-seeker tragedy, apparently. 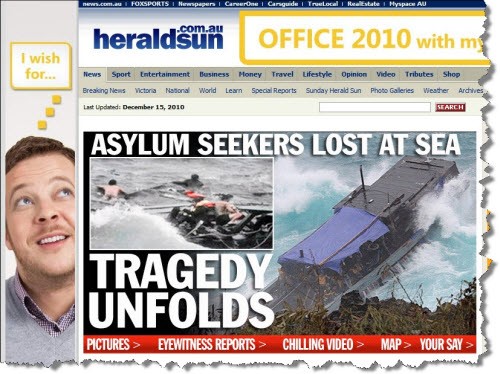 “In the midst of global climate change talks last December, a top Fox News official sent an email questioning the ‘veracity of climate change data’ and ordering the network’s journalists to ‘refrain from asserting that the planet has warmed (or cooled) in any given period without IMMEDIATELY pointing out that such theories are based upon data that critics have called into question’.” — MediaMatters

“The announcement today of Reuters’ launch of an American wire service has already been well-reported and well-analyzed. So here are seven quick thoughts on what is in the deal for Reuters and its first client, Tribune Co, and what the new service may mean for readers and the rival Associated Press.” — Poynter

Hey, Hey — it ain’t coming back

“Nine is expected to announce within days that Hey Hey it’s Saturday will not be returning in 2011. The Herald Sun reports network bosses decided the show would not be returning yesterday, but many of the cast and crew were yet to be told.” — TV Tonight

“Less than two weeks after Google acquired on-demand video service Widevine, the search giant’s video property is said to be exploring a premium content acquisition of its own …” — Mashable

“Twitter has completed its latest round of funding — $200 million at a $3.7 billion valuation — with Kleiner Perkins as the lead investor, according to sources familiar with the situation.” — All Things Digital

That Fox boss, and policymakers everywhere, would be that much less eager to protect business-as-usual emissions if they were aware of the existence of an International Law on Crimes Against the Environment.
.
There have to be lawyers with conscience out there. How about rousing your colleagues to put one in place? Personally, I would like it to be retroactive, so that a few of today’s climate criminals get stripped of their status as role models who got away with it.

If Allan posted on slashDot he’d get moderated flamebait. But I wonder if talkback shows that are not getting many callers have fake callers to provoke a response.

If “Rupublicans” took to denying the holocaust, and promoting cigarette smoking (how many of these “scientists” had been employed there, spreading scepticism?), “FUX Gnus” would lubricate their way.