They're still pulling bodies from the water.

This has happened before. But we’ve never seen footage like this. We’ve never witnessed images like this. 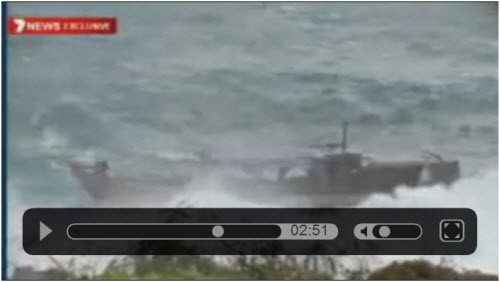 Didn’t everyone pause when they saw this footage?

Didn’t everyone save a thought, a thought that went to those people, to the cliffs, to the residents of Christmas Island standing on the shore watching on, scrambling over the rocks to pull people out, to the detainees in their beds who heard the story filtered back, to the people assigned to dealing with this chaos, to the doctors tending the wounded, to the rescue crews willing the seas to calm, to the politicians grappling to find the right response, and back again to the boat smashing against the cliff?

Watch the footage again. Or for the first time, if you haven’t.

It’s much easier to toss off a line about a certain side of politics, your previous statement on the subject, a superior position, to register your disgust, or point to a piece of policy. It’s easy to talk about how wrong someone else is, even while details are still coming to hand, even while we’re still piecing together the full story. It’s easier to keep talking over the top of each other.

That way we don’t have to admit that no one has all the answers.

“No one has all the answers”?

I tried to keep watching – I really did – but it was just so throat-shreddingly sad I couldn’t continue. No one should die as they did. I’ll stop talking now, and listen hard for the best way forward that prevents such a thing happening again. May those who died be at peace, and those who live fight in their name.