WikiLeaks drives Rudd to the top of the press coverage

WikiLeaks gets the water loving Rudd-duck back to number one, with plenty of TV and radio coverage.

WikiLeaks gets the water loving Rudd-duck back to number one, with plenty of TV and radio coverage, while the Pentagon’s man in Canberra also moved well up the list to fifth. Most of it does seem to be much ado about nothing, but trying to pressure media outlets into not publishing does seem like micturation into a Force 10.

Wayne Swan, Joe Hockey and Bill Shorten jump up the list as the Government comes out swinging against those meanie banks. I presume the Opposition will be watching the results like hawks and will try and claim another fuelwatch/grocerychoice if there’s no increase in competition and/or rates a year from now.

The Climate Change Minister only just managed a top ten appearance in the wake of the Cancun climate conference, which seems to have received a lot more spin off a far lower expectation base than last year’s shemozzle. 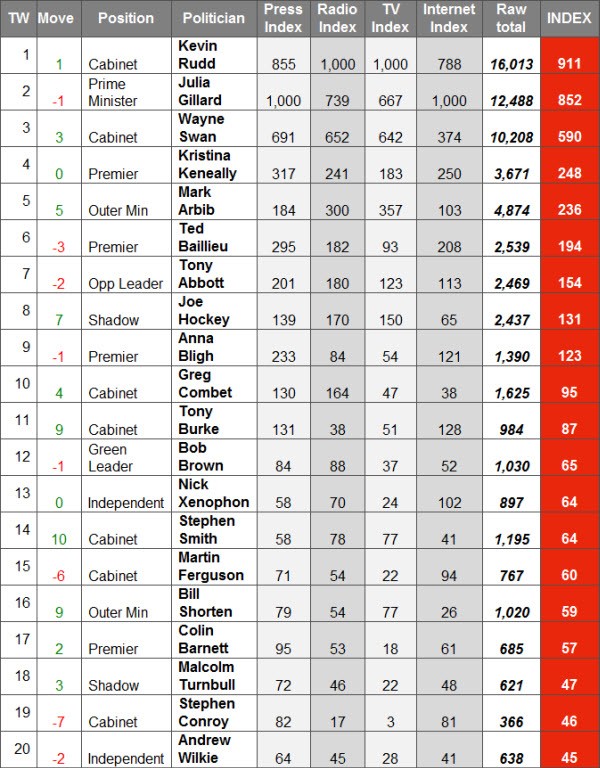 A few people having a bit of fun at the Foreign Minister and the Minister for Sport’s expense on talkback over the last week, and quite a few providing marks on the PM now that we’re effectively at political year’s end.

Well, it just had to be didn’t it? As outlined in Crikey yesterday, a mountain of coverage — and just in case you were wondering, three times as much television as any politician this week.