Oprah’s been and gone but diamonds are forever

Even though she isn't a diehard fan, Sarah Baker has plenty of respect ... and some sparkles ... to remind her of what she calls a once-in-a-lifetime experience.

The audience members for the morning taping got a pearl necklace. Personally I think I scored better.

Yes, 35 days after receiving an email that said “congratulations, your Oprah show ticket request has been successful”, the day had finally arrived to see one of the world’s most powerful women on stage.

I stood in line down Macquarie Street in Sydney, 3½ hours early, with my purple wrist band and my highly sort-after Oprah’s Ultimate Australian Adventure ticket grasped tightly. I was surrounded by diehard Oprah fans, mostly middle-aged women, some of whom had taken the day off work or travelled from interstate (like me) and even some from overseas.

I was lucky to have scored a ticket after my sister went into the ballot with no realistic expectation of ever getting an allocation, given that Oprah herself confirmed that of the 350,000 Australians who applied,   only 12,000 were successful.

I wouldn’t label myself a diehard Oprah fan. Sure, I’ve watched the show and always been intrigued with her access to Hollywood stars, her “favourite things” episodes and “wildest dreams” adventures, but I wasn’t going to pass up this was a once-in-a-lifetime experience to see the queen of American TV at work.

As I took to my plastic seat in section C of the forecourt, I realised just how spectacular the production was … 6000 people covering the steps of the Sydney Opera House, perfect blue skies, the Harbour Bridge as a backdrop and Oprah’s 302 American guests seated front and centre of the stage among Australian celebrities such as Curtis Stone and Oprah’s “bestie” Gayle King.

Ross “Daddy Cool” Wilson treated the crowd to some pre-show entertainment, lifting everyone to their feet with Eagle Rock and at 4.55pm there was a buzz as the countdown to Oprah’s Ultimate Australian Adventure show began.

Squeals, shrieks and high-pitched yells came on cue each time Oprah was mentioned, but it was the mesmerising presence of the woman herself that had the 6000 audience members transfixed as she came on stage, dressed in a Collette Dinnigan-designed pink top and long white skirt. “Helloooo Sydney!”  she shouted. “Hello Australia!” She then went on to say “you haven’t lived unless you’ve wandered through Australia”.

But diehard fan or not, to see her in person, (even if she was just that speck in the distance) an African American woman who has made a career out of talking to celebrities and everyday people, establishing charities and making  dreams come true, was unexpectedly overwhelming.

She talked to the audience in her usual exaggerated form with an air of confidence and excitement and during ad breaks talked about her Australian adventure and her fear of tasting Vegemite,  careful to remember the support she’d received from the audience over her 25-year career, saying that the show was “all about the people”. Despite an allergic reaction to her eye shadow, she appeared genuinely excited to be in the Sydney sun.

She talked about her love for Australian people, our way of life and continually mentioned the red “O” featured prominently on the Sydney Harbour Bridge at night. “I’ve got an O on the bridge,” she said. “I can’t believe I’ve got my own O.”

She wasn’t shy about her wealth or lavish lifestyle, telling the crowd it normally takes “a village of people to get her ready in the morning”. “That’s what happens when you get rich, you get somebody to dress you,” she said. She is worth an apparent $2.5 billion after all. “And I still can’t get TVs to work; I need people to help me with that, so by the time the weekend comes I don’t know what to do with myself,” she said. Lucky then that her entourage were in there at every ad break to fix her hair, touch up her make-up or wipe the sweat from her brow.

The show had a star-studded line-up, with U2’s Bono, Hugh Jackman, Nicole Kidman, Keith Urban and Olivia Newton-John all taking the stage with Oprah to share their Australian experiences, traditions and memories. Oprah even tasted Vegemite and declared it as “delicious” and “not something to fear”.

But the show wasn’t without glitches. Jackman made a grand entrance, travelling too fast on a flying fox and coming to an abrupt halt, leaving him with an eye injury, courtesy of a stage light. Kidman’s and Urban’s  interview was less than entertaining, with the conversation turning to Oprah’s love for Scrabble as she attempted to drag out the conversation. Oprah also lost a fake eyelash, had watery eyes from her make-up, and microphones failed, but as they say, the show must go on.

The finale was spectacular, with all the guests singing I still call Australia home alongside the Gondwana National Indigenous Children’s Choir as a huge Australian flag was draped over the audience.

Oprah ended the show with some words of wisdom. “Live your life on purpose, it’s the only one you have,” she said. “I believe if you give your best then the best will come to you in return.”

And then, after an hour and 40 minutes, she was gone.

So was “Project O” worth the $4 million it cost taxpayers? That’s debatable, but I will say this in her defence; she’s approachable. She doesn’t shy away from the media, she answers questions, she stops to talk and take photos with guests. She may be powerful, but she’s not a snob.

And besides, towards the end of the show, in Oprah’s special surprise voice, she said: “Well, it’d be nice if we could all have some diamonds, that’s why we have enough for 6000 of you!’ You’re all getting a diamond necklace!”

The crowd went hysterical, rising and cheering, shouting and squealing.

It’s a Rio Tinto Argyle diamond necklace! We were given a gift voucher for the necklace at the show’s end. 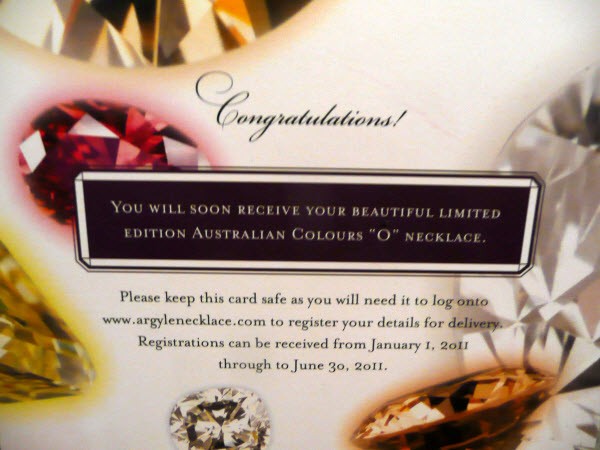 Apparently the necklaces are worth $450 each. On the back of the card it says: “Congratulations, you will soon receive your beautiful limited-edition Australian Colours “O” necklace. Please keep this card safe as you will need it to log onto … a website address … to register your details for delivery. Registrations can be received from January 1, 2011 to June 30, 2011. (So there’s no way it’s going to be a Christmas present.)

Tourism Oz looks to tap into the Oprah Effect

Oprah fever is starting to hit…