The spin on Hauritz’s sale. Yesterday, The Courier Mail had a scoop on its back page — dumped Test spinner Nathan Hauritz was selling his cricketing wares, resigned, apparently, to never donning the baggy green again: “In a scene both normal and bizarre, there was Australia’s premier spin bowler sitting in front of a cardboard […]

The spin on Hauritz’s sale. Yesterday, The Courier Mail had a scoop on its back page — dumped Test spinner Nathan Hauritz was selling his cricketing wares, resigned, apparently, to never donning the baggy green again:

“In a scene both normal and bizarre, there was Australia’s premier spin bowler sitting in front of a cardboard box on Saturday at his Coogee flat as he gave away his cricket gear.” 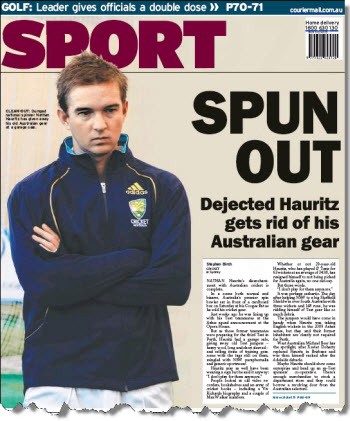 By late yesterday, journalist Stephen Birch was backpedalling online. In fact, he wrote, “Hauritz has told those close to him he still has a burning ambition to fight his way back into the Australian team”. But for the full story, we turn to the Fraser Coast Chronicle, which reports today:

A COURIER-MAIL back page story panning Hervey Bay cricketer Nathan Hauritz for allegedly selling off his representative cricket gear at a garage sale contained a number of major inaccuracies according to the journalist, Stephen Birch, who wrote the initial version.

Birch admitted yesterday his article had been changed by subeditors because “that’s the way it goes sometimes”.

When questioned about the accuracy of his report Birch admitted that what was printed was wrong in key areas.

He said he had written the piece after stumbling upon a garage sale where he had happened to notice Hauritz sitting up the back of the garage going through a box of cricket gear.

He said he walked over to Nathan and asked if he could buy some of the gear and Hauritz had given him a couple of the pieces.

The journalist at no time identified himself, nor did he talk to Nathan and ask him why he had been so generous to give him a valuable piece of sporting memorabilia. Instead he had raced off to work and penned a story …

Hauritz’s family in Harvey Bay have been “stunned and angered” by the reports, we’re told. Who could blame them? — Jason Whittaker

Prophetic Globes’ picks? And the nominees are … well, nobody knows yet. Finalists for the Golden Globes won’t be announced until late tonight Australian time. But yesterday, News Limited’s online tabloids predicted the future… 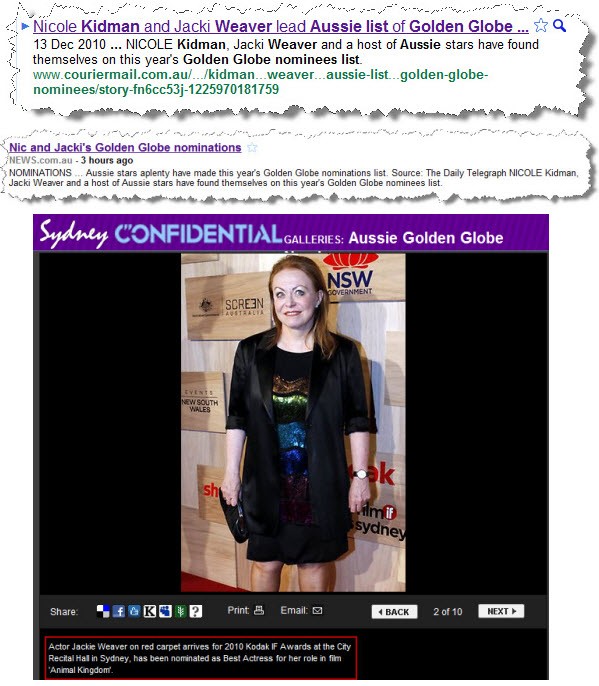 “The doyen of Australian news reading, James Dibble, has died from cancer aged 87 after an illustrious career with the ABC.” — The Australian

Across The Atlantic, how to make money in print

“The Atlantic, the intellectual’s monthly that always seemed more comfortable as an academic exercise than a business, is on track to turn a tidy profit of $1.8 million this year. That would be the first time in at least a decade that it had not lost money.” — The New York Times

Gawker is back after hacker attack

“Web sites owned by Gawker Media resumed publishing on Monday morning after a virtual battle with hackers over the weekend.” — The New York Times

“A criminal inquiry into phone-hacking at the News of the World could be reopened and staff prosecuted following legal action by some of its alleged victims, a court heard today.” —The Guardian

“Twitter has analyzed the 25 billion tweets sent in 2010 and published the list of top overall trends in the year behind us, as well as the top 10 trending topics in eight categories: news events, people, movies, television, technology, World Cup, sports and hashtags.” — Mashable

The Times gets with the social networking times

“Earlier this week, New York Times Social Media Editor Jennifer Preston tweeted that she would be returning to reporting full-time. The news made me wonder: What would this mean for social media at the Times?… The move is part of the Times’ efforts to more fully integrate its print and digital operations. It’s also an acknowledgment that social media needs to be — and is already — a shared responsibility.” — Poynter

“YouTube has launched a cool new product to highlight the hottest videos of the moment. Called YouTube trends, it will automatically pull trending videos and topics in a central location, along with a twice-daily editors-selection of videos pulled from the trending clips and from other video curator sites.” — WebNewser

Why Ponting must stay as skipper