Every new publication by WikiLeaks is bringing in more donations to help the organisation keep functioning.

Funding WikiLeaks. Every new publication by WikiLeaks is bringing in more donations to help the organisation keep functioning. That at least is the story, according to the German Wau Holland Foundation, one of the whistleblowing platform’s main funding channels.

Der Spiegel reports that even though key payment channels have been blocked, donations for WikiLeaks keep flowing in. Hendrick Fulda, a board member, told the news magazine that since October 2009, Wau Holland had received a bit more than €900,000 in donations, most of them small with an average of about €25. Of those donations some €370,000 had been paid to WikiLeaks so far with payments only made when the foundation gets a receipt.

Fulda: … That applies to travel costs, as well as hardware expenses, for example new computers, or infrastructure costs like internet access. Personnel costs are a relatively recent development. WikiLeaks now pays some of its employees salaries. The staff members give the organisation an invoice and WikiLeaks hands them over to us. Finally we also deal with campaigns and legal assistance, for example lawyers’ costs. Nothing gets paid without a receipt.

Fulda: I haven’t checked every single hotel but, based on the receipts I’ve seen, that is nonsense. Assange flies economy class and often stays with friends and acquaintances.

NatCen’s Penny Young believes that one of the revealing long-term trends of her institute’s findings — the survey has now been conducted for 30 years — is how the public has lost confidence in the banks.  Virtually everyone thought banks were well run back in the ’80s — now only 19% do. Banks are even less highly regarded than either the press (39%) or trade unions (35%).

There has been an eight-point increase since 2008 (to 29%) in the proportion who feel unemployment benefits are too low, and a five-point increase (to 32%) in the proportion who disagree that many social security recipients are undeserving. But the 29% who think unemployment benefits are too low is well below the levels obtained after previous recessions — 53% took that view in 1994 and 49% in 1984.

Overall, those agreeing that government should redistribute income stands at 36% in 2009, compared with 51% in 1989.

A readership at last. As I read my way around the web of a morning I earnestly post links to mostly serious pieces I come across on to one of those social whatever sites and most days the references disappear into the cyber ether. But today I notice I have actually made a Newsvine most read list. 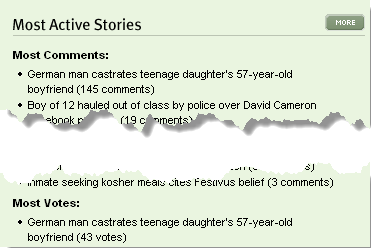 I regret to say that my achievement is not for some discovery of some serious analysis of the world but the story of an enraged father who disapproved of his daughter’s older boyfriend and went to his home and castrated him with a bread knife.

No new housing boom. The stimulus to housing construction given by the federal government as part of its reaction to the global financial crisis is well and truly waning. Australian Bureau of Statistics figures out this morning show dwelling starts fell 13.2% in the September quarter to 39,399 units. 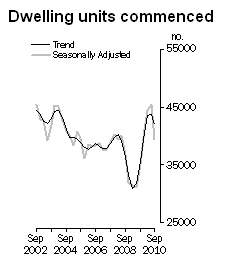