The monthly global temperature data from NASA shows that it was easily the hottest November in the temperature record. 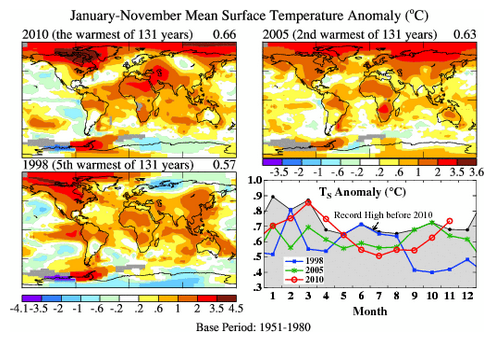 Kevin gets some revenge. Our foreign minister can be forgiven for wanting a little bit of revenge at the expense of the United States government. Those US diplomats were rather unkind in their assessment of his prime ministerial abilities in their cables back home and modestly coming to the defence of Julian Assange is a way of redressing the balance a little. For the truth is as Kevin Rudd has explained — it is not WikiLeaks to blame for the fact that all those cables are becoming public knowledge. Their leaking in the first place was the result of appalling US security.

The former Prime Minister would not be human either if he was not getting some satisfaction from being the principled one in demanding that Assange be given the presumption of innocence when it comes to whether he has or has not committed any offence in Australia or elsewhere by his involvement in the publication of the documents. He has been able to portray himself as a follower of proper legal process who has resisted the temptation to pander to US pressure as his successor, Julia Gillard, was seen to do. Gillard has now gone very quiet on the issue and no wonder

Welcome to the DOSA. I notice the revolt has started. In South Australia the publicans are getting anxious about the emergence of backyard bars operating in homes in Adelaide and in country areas. Smokers, exiled some years ago from pubs, have started gathering in private places and the Australian Hotels Association are noticing the competition. “It’s not just mates getting together for a good time, it’s not an occasional party,” AHA chief executive Ian Horne told the ABC. “We’re getting reports some of these enterprises becoming quite commercially made.” And to add insult to this imagined injury, the publicans are finding that the smokers are able to watch TV sporting events and buy alcohol cheaply. Now the association is urging police to impose large fines on those caught.

Up here in the national capital I have not heard of such a development but on one of my rare forays to a licensed club this weekend I was introduced to the latest form of segregation smokers such as me are subjected to — the DOSA or Designated Outdoor Smoking Area. 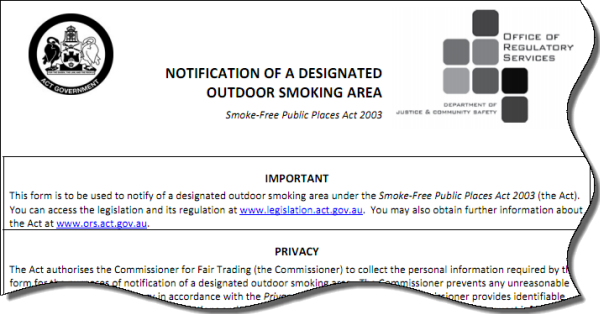 This is an area separated off from the rest of the great outdoors by glass panels and behind the cage smokers are allowed to congregate but staff are forbidden to enter while anyone is puffing to clear away a glass or empty an ashtray. Smoking coffee drinkers are not so lucky. The erection of DOSAs is only permitted on licensed premises with poker machines.

No wonder with regulations such as this that the social scientists are managing to recreate the illegal speakeasies that marked the American era of prohibition.

Political quote of the year? The Yale University librarian charged withe updating the University Press’s Yale Dictionary of quotations has chosen Christine O’Donnell’s TV ad declaration during her US Senate campaign “I’m not a witch” as this year’s best quote. AP reports that O’Donnell’s quote is cited by Fred Shapiro, associate librarian at Yale Law School, who released his fifth annual list of the most notable quotations of the year. In the ad, O’Donnell was responding to reports of her revelations that she had dabbled in witchcraft years ago.

The quote by O’Donnell, a Tea Party favourite running in Delaware, tied for first place with “I’d like my life back,” the lament made in May by BP’s CEO Tony Hayward after the worst offshore oil spill in US history. “People resented the fact that he was wanting to get back to his yacht races and other aspects of his normal life when those little problems were dwarfed by the magnitude of what people on the Gulf Coast were dealing with,” Shapiro said.

6. “I hope that’s not where we’re going, but you know, if this Congress keeps going the way it is, people are really looking toward those Second Amendment remedies. They’re saying: My goodness, what can we do to turn this country around?” Sharron Angle, radio interview in January.

7. “We have to pass the (health care) bill so you can find out what is in it.” Nancy Pelosi, speech to National Association of Counties, March 9.

10. “They should never have put me with that woman … She was just a sort of bigoted woman who said she used to be Labour.” Gordon Brown, comments about a voter he met while campaigning for British general election, April 28.

Rudders the revenge of the Nerd.

I can’t help but notice that the temperature anomalies based on years starting in 1880 must be pretty dubious to say the least.
Temperature collection has few examples dating back 130 years even here in Australia, and when you consider Antarctica and the Arctic, and no doubt Siberia, and much of Africa, and the oceans, there can be no doubt proxies have been used to fill the gaps. In other words a lot of subjective judgement has been used.
That of course doesn’t mean that the world is warming, it fairly obviously is, for example spring is arriving two weeks earelier in much of the Northern Hemisphere.

That of course doesn’t mean that the world is warming,
Sorry typo – that should read

That of course doeasn’t mean that the world is NOT warming.

LOL Thanks for the heads up on the DOSA Richard.
The thought of all those deserted non-smoking pubs and clubs has quite made my day. 🙂

Re: Welcome to the DOSA

Well (living in the National Capital) I gave up going into pubs, clubs, restaurants etc some years ago. And now I can’t even sit OUTSIDE a cafe on the pavement in the (usually) freezing cold smoking a fag.

Totally agree it’s inevitable that people will turn their ‘casual weekend barbies’ for mates into money-making – or at least expense-covering – events. Tell me about one nearby and I will go there.

(And you know, it’s just occurred to me that I have sent several posts on this topic over the last few years, and nearly always got at least one reply wishing me a well-deserved and horrible death. Why do I bother?)