In today's Media Briefs: Latika Bourke to join ABC as social media reporter, Oprah has a VB with the boys at a good ol' fashioned BBQ, how AP got its Charles and Camilla money shot and more....

Bourke now tweeting for Aunty. It was announced, of course, on Twitter:

Latika Bourke wasn’t giving anything away at the Walkley Awards in Melbourne last week, but a defection was clearly in the works. The 2010 Young Journalist of the Year will quit Fairfax Radio — where she files for 2UE, 3AW, 4BC and others; earning a level of fame in the Canberra press gallery as much for her reporting as her prolific tweeting — to join the ABC from January 24 as its new social media reporter.

According to ABC News director Kate Torney, its about continuing the “tradition” of Aunty “embracing and exploring new ways of communicating with our audience across a range of new and emerging platforms”. Bourke’s new beat, still ensconced in Parliament House, is apparently part of a “range of measures designed to explore how social media can be used to enhance and extend the ABC’s coverage of national politics”, ABC spruikers say.

Bourke’s reaction? “Excited”, she tweeted ad nauseum today, thanking her 10,000-plus Twitter followers for what is a “compliment to yourselves that social media is being taken so seriously”. She’ll file for ABC current affairs programs AM, PM and The World Today. And of course, tweeted PM host Mark Colvin, “as well as tweeting”. — Jason Whittaker

How many could Oprah do on the plane to London? This photo, from The Daily Telegraph‘s special Oprah section (you can also join The Tele‘s Oprah in Sydney Facebook page), is, amazingly, genuine: 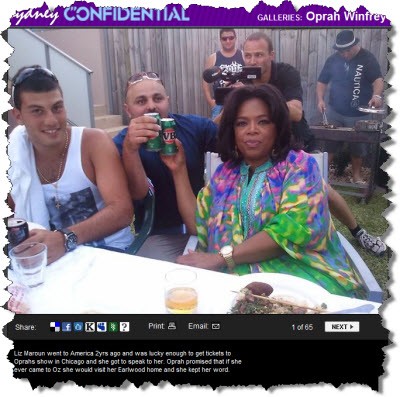 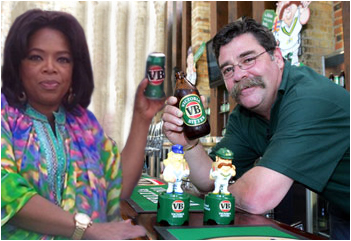 “The ABC and Sky News are trying to broker a new format on leaders’ debates in federal elections. This, as ABC chief Mark Scott and Sky News’s Angelos Frangopoulos team up in an unlikely pairing but one that could see them seize control of televised election coverage.” — The Australian

How AP got its Charles and Camilla money shot

“It is one of those shots that will surely be republished endlessly in future. It will have historical value because it catches a moment in the political life of Britain and the life of the heir to the throne.” — The Guardian

Digital is the new print newspaper

“iPad news apps appear to be accelerating a move away from newspaper print subscriptions, a survey of more than 1600 users of the tablet device suggests.” — mUmBRELLA

Hmm, I’m still waiting to find out how AP got the Charles and Camilla shot.
My guess was by banging on the car window.