Over to you, Combet

Just before the Mexican dawn on Saturday, the UN got its mojo back in guiding global action on pollution and climate change...

“Just before the Mexican dawn on Saturday, the UN got its mojo back in guiding global action on pollution and climate change,” writes the Climate Institute’s Erwin Jackson in Crikey today.

“At 3pm on Friday the meeting hung in the balance. The new text to capture discussions over the previous two weeks had been due for release at 8am. A silent hush and tension had fallen over the conference as the Mexican presidency worked behind the scenes with senior negotiators to finalise an agreement that could be the basis of a decision in Cancun. At three the text was released and at 6pm the chair of the meeting, Mexican foreign minister Patricia Espinosa, entered the plenary hall and was greeted by thunderous applause and a three-minute standing ovation. This moment defined the outcome in Cancun.” 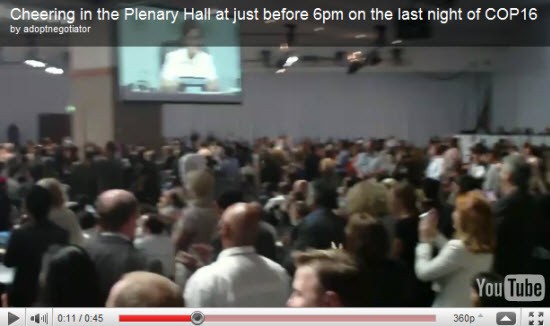 But what exactly were the delegates cheering, especially given some of the headlines coming out of the talks don’t amount to much more than an underwhelmed yawn?

This was all about process, writes Giles Parkinson in Climate Spectator — about patching up the process of multilateral talks and setting new building blocks for a legally binding treaty. In short, meeting a set of pretty low expectations, care of Copenhagen.  The Cancun talks produced a formal UN decision anchoring pollution limitation and reduction targets covering more than 80% of global emissions — the first time the US together with China and all other major emitters have anchored their national pollution targets in a formal UN agreement.

This is significant. But it comes with a dozen different qualifiers, one being that the targets do not add up to a safe upper limit level of warming. So what’s next?

Having “saved the process,” writes Parkinson, “the task remains to come up with an agreement to save the planet, or at least the things that live on it.”

The best way Australia can hope to help in this progress? The same old same old. A carbon price.

Climate change minister Greg Combet reportedly impressed in talks in Cancun. Now it’s all eyes on him to see if he can get this over the line.

The Games are over, let the action begin — perhaps?