From the Crikey national affairs desk/office/pad in Soho, I watched them swarm through the city, up Oxford Street and across Leicester Square. London was convulsed by protest over tuition fees, in a crisis for the coalition government.

“Scenes we haven’t seen since the days of the Chartists,” said insufferable historian David Starkey on Newsnight, as the city outside continued to echo with the shouts of protesters and the sound of breaking glass.

London was convulsed by protest today, as the tuition fees bill came to the vote — a proposal that would raise the cap on the fees universities can charge from £3000 ($A5000) a year to £9000 ($A15,000). They’ve also changed the funding basis, removing large amounts of direct non-head count funding to whole faculties, including the humanities, thus forcing them to charge in the upper end of the fees bracket.

The bill presented the Lib-Con coalition with its first crisis, since the Lib-Dems had gone to the electorate promising to oppose any rise in tuition fees, even taking an on-camera pledge to stand against it.

But that was when they assumed that any coalition would be with Labour, or that the Tories would rule outright. Coalition with the conservatives plunged them into instant crisis. Part of the coalition agreement would be that they could abstain from any vote on tuition fees, but their involvement in the Cabinet meant that some of them were effectively piloting the bill through the House, and then see their party fail to support it.

They probably hoped they could get away with it, due to the post-Brown torpor. They thought wrong. Over the past three months, a gathering campaign has challenged the coalition to justify itself, with increasingly painful results for the Lib-Dems. Protests and occupations have been occurring up and down the country — in places such as Sheffield and UCL, the occupations have been going for weeks.

The NUS and other parts of the mainstream protest movement had hoped that they could persuade enough Lib-Dems to vote against the bill. In the end it passed about 320-300. Had they moved 10 “yes” votes into the abstain and ten abstains into the “no”, they would have had a result.

In the end 28 of the 57 Lib-Dems abstained, a record rebellion for a party in government.

Outside they were setting a different sort of record. The direct action component had been ramping up over the last few protests, with a bit of argy from the Black Bloc of anarchist, less-well prepared 17-year-olds, all now multiply photographed kicking in windows, and a few thugs.

Today, it really went off, Athens style. The Black Bloc was there in the hundreds, and it was off from the start. By far the most violent gang of course was the police, who mounted the first full-horse charge in many a year, allegedly to disperse a crowd of protesters in Parliament Square. After that they kettled them, though they were close to outnumbered and some broke through.

By early evening those whose strategies were always to maximise the contradictions and minimise the intact windows, were joined by those who were purely f-cking angry, and who can blame them. From the Crikey national affairs desk/office/pad in Soho, I watched them swarm through the city, up Oxford Street and across Leicester Square.

They trashed Topshop, a chain owned by Sir Philip Green, a tax avoider who advises the government on ways to cut services, and then it really went off, as the Treasury building was trashed and the foyer of the National Gallery occupied.

To be fair, as in Greece, there was a fair bit of youthful exuberance, as when they tried to torch the giant Christmas tree in Trafalgar Square. They didn’t manage it, but they did light huge fires in Parliament Square, which looked like end times.

It got pretty real when a group of them encountered Prince Charles and Camilla in a car en route to a royal variety show, and laid siege to it. The photo is incredible. There was real fear in those eyes. The peasants were actually here. 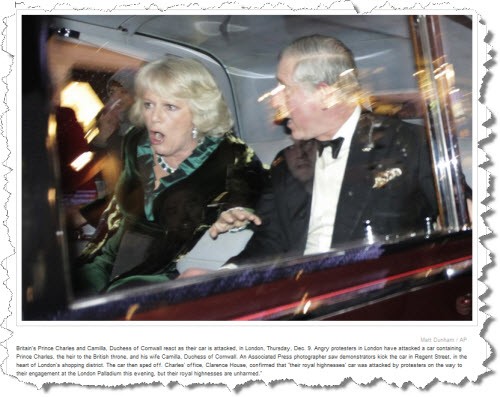 Tomorrow there will be the usual recriminations, etc, but it is difficult to see where the movement of sorts will go next. The Lib-Dems weathered the storm, and there’s little institutional force to keep the pressure on.

More curiously, for the first time ever, it seemed worthwhile staying in — and watching Anonymous mount cyber attacks across the world as the WikiLeaks war of words and cables continued. But the fact that one had the choice was pretty good. Next week it’ll be snooker and the Archers again, maybe. But it went off this week.

Do you thin this will destroy the Liberals’ electoral appeal for a generation, as the gst destroyed the Australian democrats?

Good stuff Guy. Although I’m deeply distressed to hear you didn’t get a comp to the Royal Variety Performance.
What’s wrong with the powers that be at Crikey head office?
First they demand the TV coverage of Ashes be turned off in the bunker, and now they can’t even wangle their London correspondent a front row seat at the season’s biggest night. It’s a bloody disgrace! 😀

My god – the peasants are revolting!
Heads will – nay must – roll over this.
Examples must be set.

I can smell the fear from here …….

great, now I know what Camilla’s “O” face looks like.

Let the revolution roll on down to Canberra where the real horse’s arses are.