The steady growth in the number of women participating in the workforce continues.

Women keep going working. The steady growth in the number of women participating in the workforce continues. Australian Bureau of Statistics figures for November out today put the female participation rate at a record high of 59.3%. Back in February 1978, the earliest figure given in the ABS publication, the rate was 43.5%. 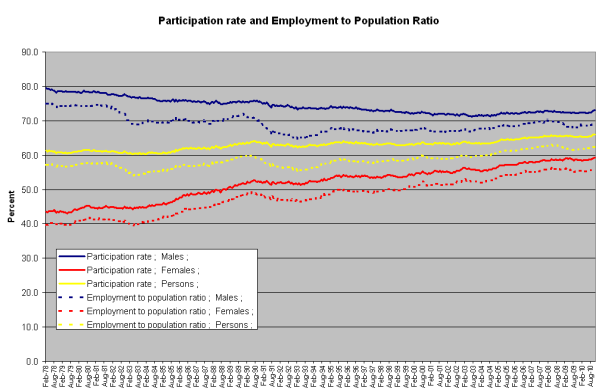 Overall the participation rate in November 66.1% was 0.2 percentage points higher than in October. That increase reduced the impact of the 54,600 new jobs created during the month on the monthly unemployment figure which was down 19,500 (0.2 pts) to a rate of 5.2%. 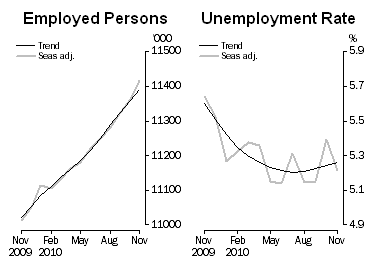 A goose not a duck. The problem Kevin Rudd has in dealing with the United States is not that they doubt his capacity to allow criticism to flow off his back but they think he is a goose rather than a duck. And as for what the Chinese diplomats think of him, well, it is not hard to guess.

If Australia’s two most important relationships are those with the USA and China then surely this man can not be allowed to continue for long as our Foreign Minister.

And as for Mark Arbib! It can only be called gross disloyalty. If the Prime Minister keeps Mark Arbib in her ministry she is admitting that she is prepared to sacrifice every principle of good government to cling to power.

Time to take a similar view? Well America’s little pet has knocked off the $45 million on the failed World Cup bid so perhaps it’s time to let bygones be bygones. Sports Minister Mark Arbib should now follow the example of British MP Roger Godsiff and move something similar: 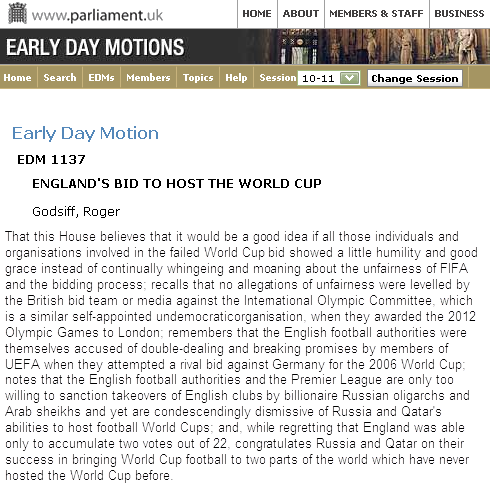 The battle begins. The guerrilla war of the internet has begun. Midday’s report from the front as the supporters of WikiLeaks attack the financial institutions that have caged in to pressure from the US Government:

Richard I prefer to take the words of Hillary Clinton plus those of the present American Ambassador and Kurt Campbell from the US State Department, all admirably more qualified to speak of Americas regard (excellent) for Kevin Rudd, than yourself.

@ David – indeed.
It’s interesting that Farmer (a Labor man?) should pass this comment; I have just read Greg Sheridan’s assessment in the Australian, which surprisingly, perhaps, is glowingly complimentry of the Foreign Minister!

@ Stephen…KR has in my opinion been more Prime Ministerial than the PM over the Wikileaks cables so far. I was as surprised as yourself over the Sheridan article. Rudders would have had a wry smile over that one.

Too many politicians enter public life forgetting what “representation and government (to do the best by the community of people you are elected to represent)” means – and run off at a self-obsessed tangent, looking after their, or “the club’s”, own interests before that of the rest of the populace at large. They become so absorbed and impressed in their own importance and power and what that can do.
Poor “Mark the Knife” – every time I see (or hear) him I think of Lyle Lovett’s “Moritat”, and a rat with a gold tooth!
As for dumping him – why did Gillard come out so strongly against Assange? Reckon she’s got that much power, herself?

I disagree that its time to move on from not winning the World Cup.
The awarding to Qatar was such a blatantly bad decision for football that it deserves all the criticism it rightly receives.

I would suggest the 2018 result is not nearly as controversial (at least Russia has some football tradition to speak of) and so Roger Godsiff’s comments re England’s bid arent necessarily applicable for 2022.