20 years later, and the annual Meredith Music festival is world renowned as one of, if not the, best music festivals in Australia. What's its secret? Why does it engender such loyalty and love from patrons?

Three blokes. Two  landlines. A family farm. 250 campers. A $20 fee at the gate. One Saturday night. 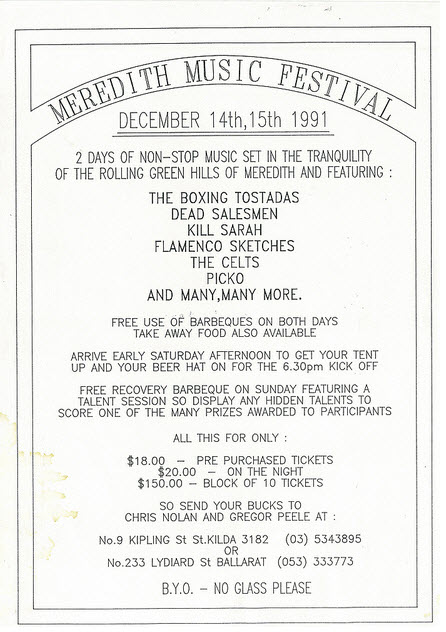 20 years later, and the annual Meredith Music festival is world renowned as one of, if not the, best music festivals in Australia. What’s its secret? Why does it engender such loyalty and love from patrons?

As the Meredith website puts it: “it’s as much about what’s not there as what is…”

No corporate sponsorship, a capped amount of tickets (11,500), no overzealous security, no ban on BYO, a commitment to open spaces and peaceful corners, no hulking carbon chewing laser spewing U2 style stage, a furniture policy, an unfailingly great line-up of bands, a “better before bigger” motto and a No Dickheads policy ensures that this festival is still, despite tripling in number in the second year and growing ever bigger after that, imbued with the spirit of that first flyer: “2 days of non-stop music set in the tranquility of the rolling green hills of Meredith.”

Despite all these thoughtful additions, the festival still retains its community feel, and that’s largely due to the Nolan family whose farm (or a chunk of it) hosts the event, the organisers who have run a remarkable responsible and transparent operation over the years, and the tiny town of Meredith, situated just outside Geelong in Victoria, which welcomes festival goers with open arms, egg ‘n’ bacon rolls and wooden reindeer in their front yards every year.

The Supernatural Amphitheatre, a made-up name by the organisers for the little valley that the one and only stage is set in but that now boasts its own Melway reference, remains the heart of the festival . To stand there under the lights come sunset on the Saturday is to be part of something truly memorable, no matter which band’s got the slot, each and every year.

And given that there’s only one stage, small by most festival standards, there’s no line up clash. As my friend Cam likes to say, a 17-year veteran of the shindig, “One stage … no excuses.”

And what of the loyal patrons who enter the ticket ballot each and every year, willing to eat their own hands for a ticket and a chance to honour an annual tradition — some would say more sacred than Christmas —  the one and only way to kick off summer?

Crikey asked the good citizens of Twitter (seems there’s quite the cross over between music festival patrons and the social media platform — one of them might live tweet the thing  if the reception wasn’t so patchy … come to think of it, patchy reception is one of the reasons it remains supernatural) for some advice for first-time players.

And so we present, for those lucky enough to be queuing up for Meredith for the first time — 20 hard learnt survival tips to mark 20 years of Meredith:

1. I think it is essential to remember it is not about the music. — @djwoodeye
2. gumboots. Tarp. Gumboots. Gumboots. — @emsexton
3.  take vodka and 3x bottles V8 chilli tomato juice for easy-as loody marys (decant all glass into plastic, of course) —  essential advice from @trendyle
4. not all dirt hills are pillows. Some have bull ants in them. — @nightwatchman
5. holding in your pee uses up more energy than getting up to pee, and its this energy your body uses to keep your body warm in the AM — thank you @anmbroughton
6. if you had a rough night, start the day with something a bit healthier. For example, a G&T or a passionfruit — @silencewedge
7. north / South Pines! — @jamesyencken
8. make sure your spare tyre’s in good nick. Extra tent pegs. As many tarps as you can muster. Two pairs of sunglasses. — @jmac
9. pitch tent, blow up mattress, unfurl sleeping bag before embarking on bad behaviour. Or it’s gonna be an uncomfortable night. — @OzCopyGirl
10. rain poncho. Painted fingernails hide dirt. Baby wipes. Small bag on long strap. Get a good viewing spot early, guard it all day. — @rosiefantail
11. the driest & shadiest place is front two rows of stage. Get up there and hold your ground! Use elbows & NO loo breaks — @trendyle
12. if there’s a plate of cookies sitting on a plastic tray, and the cookies look home made, don’t eat three. #neardeath — @TinselTone
13. if you pee in the wheat fields, spikey wheat gets stuck in your undies. Also, sheep might see you. And people judge you. —  @mstox
14. trsfr glass bottled alcohol to plastic & WRITE ON THE BOTTLE IN BOLD BLACK “THIS IS VODKA!”. Absent minds & parched mouths, yikes — @becsmith
15. if there is a sheep in your tent do not go in there with it. — @smileymcslidey
16. to avoid late night wheelbarrow races ( you know, with you as the wheelbarrow) or risk waking up very sore in the morning. — @theBlueWedu
17.  take a bag of apples. — @kaosam
18. garbage bags. You can put wet stuff in them, put dry stuff in them to stop it getting wet, use them as raincoats and sit on them — @gilbatron
19. when you think you’ve reached your allowable alcohol capacity, drop by the Pink Flamingo realise you’re in fact relatively sober — @rosewal
20. agree who’s going to be the designated driver on the homewards trip well before Sunday afternoon. — @ozcopygirl

In summation: Gumboots. Baby wipes. Bloody marys. In that order. Good luck out there, and happy birthday Meredith.

The details: If you weren’t lucky enough to score one of the coveted 11,500 golden tickets to Meredith, take heart. Tickets for Meredith’s sister festival, Golden Plains on March 12-14, are still available.

Nowhere to pee, but music fans keep rocking on

Heart of the Maddah: why Soundwave music festival collapsed