WikiLeaks update: Corruption in Tunisia, an “Arab force” and the party of the decade

As Julian Assange fronted court in London this morning and the media storm continue to circle around the enigmatic whistleblower, his WikiLeaks website continued its drip feed of secret cables sent from US embassies around the world. Today, more than 100 extra cables were published. Here is a summary of the best of them.

As Julian Assange fronted court in London this morning and the media storm continue to circle around the enigmatic whistleblower, his WikiLeaks website continued its drip feed of secret cables sent from US embassies around the world. Today, more than 100 extra cables were published. Here is a summary of the best of them:

Consul General Martin R. Quinn, possibly auditioning for a future gig with the New York Post‘s ‘Page Six’ gossip column, describes Jeddah’s “thriving and throbbing” party scene for Saudi Arabia’s young elite, where the “full range of worldly temptations and vices are available” and the “freedom to indulge carnal pursuits” is protected by religious police who turn a blind eye. 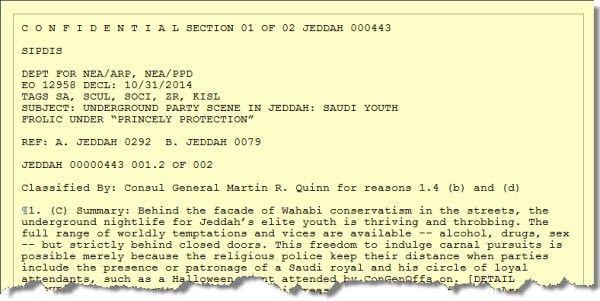 A wide-eyed Quinn, who attended one Halloween event sponsored by a US energy drink company, reports that behind the facade of Wahabi conservatism lies a cesspit of Western indulgences that would presumably drive the Salafists over at Al-Qaeda to heinous acts.

At the fucntion the official vice squad was nowhere as a posse of 20 to 30 year olds packed the dancefloor, and Nigerian bodyguards protect the princely youth from scrutiny.

“Inside the gates, past the XXXXXXXXXXXX security guards and after the abaya coat-check, the scene resembled a nightclub anywhere outside the Kingdom: plentiful alcohol, young couples dancing, a DJ at the turntables, and everyone in costume.”

Although alcohol is strictly banned by Saudi law, at this particular shindig bottles of top shelf liquor were already consumed and topped up with moonshine or “sadiqi”, as high-class working girls watched on.

Saudi Arabia proposed creating a US and NATO-backed Arab force two years ago to intervene in Lebanon and defeat Iranian-backed Hezbollah, another cable released by WikiLeaks today reveals. The US and NATO was expected to provide movement and logistic support, as well as “naval and air cover”.

Foreign Minister Prince Saud Al-Faisal suggested the plan and proposed a “security response” to be deployed to Beirut under the cover of the UN. While the plan never came to fruition, and was only ever in its initial stages, it reflects the concern amongst many Arab nations towards the growing influence of Iran — an anxiety echoed in other WikiLeaks cables.

Prince Saud said that halting Iranian influence in Lebanon would be an “easier battle to win” than Iraq or on the Palestinian front.

Corruption in Tunisia: what’s yours is mine

“The sky’s the limit” says the US when it comes to corruption in Tunisia. The family of President Ben Ali is referred to in the cable as “the nexus of Tunisian corruption”, and references to “the Family” in Tunisia is “enough to indicate which family you mean”.

While shonky land deals, stolen property (including yachts), nepotism, bribery and financial mismanagement are common at all levels of the economy, the regular folk of Tunisia reserve special ire for the President’s wife’s family, the Trabelsis, who they generally regard as little more than cashed up bogans abusing their power.

The Russian Mafia remains active in Spain and this cable gives an update on two major operations — Troika (2008-09) and Avispa (2005-07) to combat organised crime (or “OC”) in the country. Several arrests of top-level OC operatives occurred, according to the cable, although the issue continues to be a hot talking point among the bullish Spanish media.

Charge d’Affaires Arnold A. Chacon does some helpful Spanish language media monitoring of the acres of column inches allocated to Russian crime lords like Zahkar Kalashov, helpfully listing the mastheads’ ideological slants in the process. It describes the Spanish flagship El Pais as “centre-left”, compared with the “conservative” ABC and the “center-right” El Mundo.

The cable says that according the press, “bureaucratic snafus” appear to have hindered Spanish authorities’ in their local oligarch crackdown.

Spain/Venezuela: reaction to denial of license for tech transfer

On 12 January 2006, the Spanish Foreign Minister strongly objected to the United States Government’s decision to “to deny the Spanish technology transfer license request related to the sale of Spanish aircraft to the Venezuelan government”. The US action to forbid the sale, the foreign minister said, would be seen as “punitive action” by the US against Spain.

Furthermore, Madrid was desperate for a “positive signal” from the US two years after relations tanked in 2004 when the newly elected Spanish government under Prime Minister José Zapatero withdrew Spanish troops from Iraq, an act George W. Bush allegedly viewed as a betrayal.

Finally, the foreign minister expressed the belief that if no deals were made with the US in 2006, none would happen for several years “because the U.S. would be absorbed by political campaigning in 2007”.

However, this contrasted unfavourably with the overall record of Brazilian police, with the cable accusing them of “wide-spread corruption” and of using the charge of “resisting arrest” to cover the “extra-judicial killings” of up to 1,137 people.

Ideological and ownership trends in the Saudi media

While there is some praise from the US towards its Saudi Arabian ally for an increasingly open media, a cable from the Embassy of Riyadh also shows that there is a well-established system of self-censorship and a tight control on opinion and information from the Saudi government.

Editors who do not tow the Ministry of Interior line can be fined SAR 40,000 ($AUD10,844) out of their own salaries for any article that does not pass muster, while problematic journalists are often persuaded — sometimes though direct threats to their family — to pursue a different line.

US TV shows like David Letterman and Desperate Housewives have become increasingly popular with Saudis, while one of Rupert Murdoch’s sons also visited spoke with the board of al-Eqtisadiah, a Saudi Arabian daily business newspaper, to pursue a deal to publish an Arabic-language version of the Wall Street Journal.

Meanwhile, another cable released today, shows that, despite constant anti-corruption rhetoric from Libyan leader Muammar Gaddafi, his family and other political elites are profiting from business deals struck through their close links to government.

“They have strong interests in the oil and gas sector, telecommunications, infrastructure development, hotels, media distribution, and consumer goods distribution,” the cable says.

The cable details the business interests of Gaddafi, his sons and his “political favourites”, which extend from government oil ventures to a family scrap over the license to a local Coca-Cola plant.

Sent from the Tripoli embassy in Libya, the cable asserts that Gaddafi’s business interests and his restrictions on press freedom will mean a challenging and long road to reform.

Berejiklian and Morrison offer a one-two punch on non-leadership