Kevin Rudd up to number two as the main Australian politician caught out so far by the WikiLeaks.

A lot of change this week, but that’s more about lower volumes across the board than any big shake up in politics. Marn the big mover owing to the $47m woman Oprah Winfrey — actually I think she may be worth a fair bit more than that … whether she’s worth anything to Australian tourism remains to be seen.

Senator Arbib continues his recent run of being associated with somewhat less than stellar voting outcomes as we all try and keep a stiff upper lip about the 2022 World Cup being awarded to an oil-rich city state that’s never actually played in the World Cup. Note to US, Britain, France and whoever else about these IOC and FIFA contests — how about making them come to you?

Kevin Rudd up to number two as the main Australian politician caught out so far by the WikiLeaks, no doubt it will improve his standing in some people’s eyes if also further straining relations with Beijing 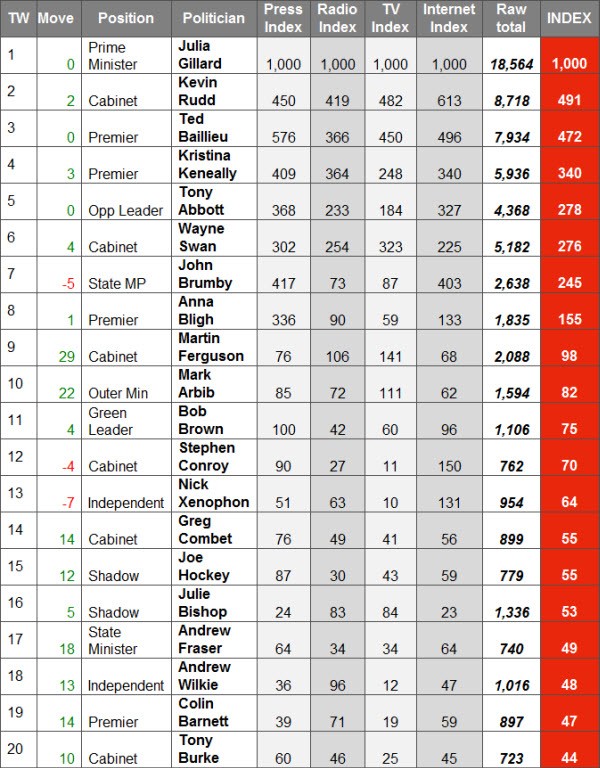 Nick Xenophon up to second, but basically owing to an appearance on late night syndicated ABC radio, Julia Gillard still the only politician being even semi-regularly discussed on talkback.

Vale Norman, just about the only really useful stuff I ever got from television was thanks to you.