One of my old mates is probably not surprised by the hard line on China that Kevin Rudd is shown to have taken in his discussions with Secretary of State Hillary Clinton.

A Taiwan connection. One of my old mates is probably not surprised by the hard line on China that Kevin Rudd is shown to have taken in his discussions with Secretary of State Hillary Clinton. He is the one who told me years ago, when the now foreign minister was making his rise towards the top of the political heap, that this was no orthodox Labor Party China lover.

The Brisbane Chinese, who formed the basis of the Rudd consulting business when he was between jobs as the top official in the Premier’s Department and a seat in the House of Representatives, were first and foremost in the Taipei camp rather than the Beijing one. The comment makes a lot more sense to me now than it did back then.

Some Chinese frankness. Our man at the top is not alone in having displayed some frankness in talking with the United States. The comments by the 55-year-old Li Keqiang, the man who is widely tipped to become China’s next prime minister and is currently the country’s executive vice-premier with responsibility for macro-economic management, in private talks with the US ambassador in 2007 have relevance for Australia. A diplomatic cable published by WikiLeaks has Li describing China’s gross domestic product figure as “man-made” and “therefore unreliable”.

As the London Daily Telegraph reports, on several occasions, the sum of all of China’s local GDP tallies added up to more than the national statistic. In 2009, for example, the National Bureau of Statistics said first half GDP had grown by 7.1% to 13.99 trillion yuan (£1.37 trillion), only to find that the sum of local GDP readouts was 10% higher.

Li says in the cable reporting his conversation with the US Ambassador that he used three ways of evaluating economic activity in his province of Liaoning — electricity consumption, the volume of rail cargo and the amount of bank loans disbursed. “By looking at these three figures, Li said he can measure with relative accuracy the speed of economic growth,” the cable said. “All other figures, especially GDP statistics, are ‘for reference only,’ he said smiling,” it added.

It is a comment such as that that makes me worry just a little bit more about the recent speculative report by Fitch Ratings and Oxford Economics on what the consequences would be if China grew by 5% next year rather than the 8.6% that Fitch is actually predicting. 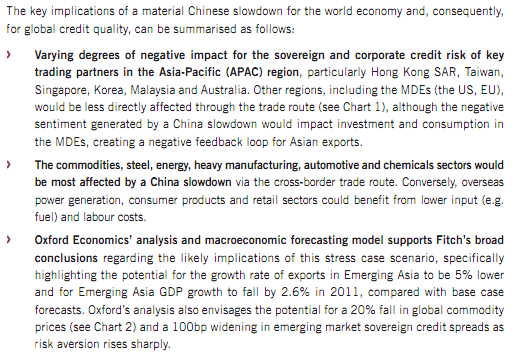 Trusting your friendly banker. Next time you pop into your friendly neighborhood bank for a little investment advice, just keep this headline in mind: 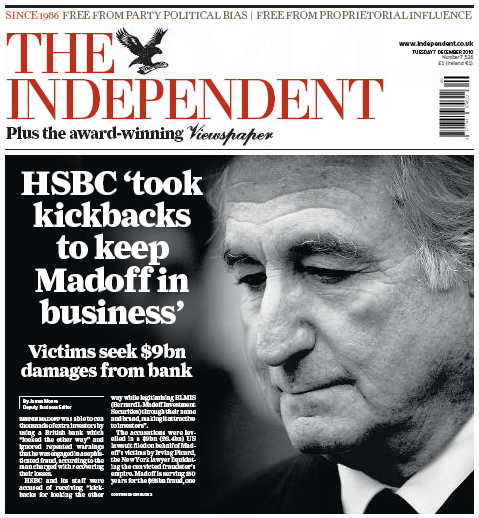 Even the biggest and the best and the seemingly most reputable are capable of falling victim to the lure of a backhander. The court-appointed trustee Irving Picard has accused the bank of helping the disgraced financier Bernard Madoff by creating so-called feeder funds for the convicted fraudster’s investment firm and is suing the bank for $US9 billion  (£5.7 billion). HSBC says it is “defending itself vigorously against Madoff-related claims that have been brought against it in various jurisdictions around the world.”

The world game is No.1. For corruption that is and it is not just at football’s world headquarters. From the China Daily comes this report: Seven former officials of the Chinese Football Association (CFA), including former vice-presidents Xie Yalong and Nan Yong, are expected to face public prosecution on charges of bribery and malfeasance at a court in Liaoning province early next year. Some of the charges involve fixing matches while others follow the FIFA speciality of taking bribes to secure the hosting rights of a competition — on this occasion the East Asian Football Championship for Chongqing municipality in 2006.

Yes, he was a naughty boy. The best “Spoonerism” of the year so far? From The Independent: 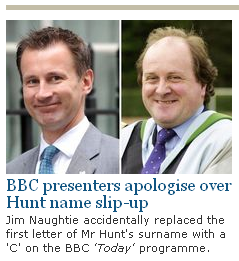 US grabs Gupta, the big fish of insider trading

Rudd’s non-Beijing link…thanks Richard for that article, shows the Rudd comments in a completely new light. Would I have found same in the MSM? is Elvis lead tenor in current performance of L

Re Mr Hunt: years ago there was more than one ABC newsreader who had to concentrate before saying “the Adelaide Hunt Club”.