Where to get your net safety button. Communications minister Senator Stephen Conroy today launched the new cybersafety help button, a $100,000-odd project that “provides internet users, particularly children and young people, with easy online access to cybersafety information and assistance available in Australia”. You can read all about it and download the button here.

But as Leslie Nasser, better known as the @FakeStephenConroy pointed out, you can’t get it from here. As he tweeted: “I guess the $100,000 they spent on the ‘Internet Safety Button’ didn’t account for five bucks and a domain.” — Stilgherrian

The Oz kicks Fairfax when it’s down. The Australian was your best bet for coverage of Fairfax’s latest managerial tantrum today, with every angle covered. James Chessell splashed the news across page one that Brian McCarthy had stood down and spoke to embattled chairman Roger Corbett; Lara Sinclair profiled interim boss Greg Hywood (Alan Kohler is a fan); Chessell, Damon Kitney and former Fairfax senior editor Brett Clegg had the “inside story” on shareholders’ reaction to the company’s recent review;  Sinclair and Simon Canning spoke to media buyers about the turmoil; and media editor Geoff Elliott and columnist Mark Day weighed in with their thoughts. 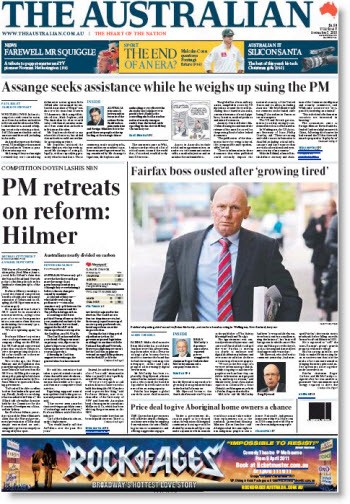 That’s seven stories by our count. Comprehensive, to say the least. Or just mean-spirited gloating? Meanwhile, The Sydney Morning Herald had a small story on page two ahead of its business coverage and The Age left the scandal out of its news pages entirely (it led the business section). — Jason Whittaker

All-male jury. The well-documented trial of Keli Lane, accused of murdering her baby daughter, features a same-sex jury, according to The Sydney Morning Herald…

What IS WikiLeaks? Media struggles for definition

“News organizations have seemed less sure about how to describe WikiLeaks, which has provided hundreds of thousands of documents to some media outlets this year regarding Afghanistan, Iraq and diplomacy. Several top outlets are now discarding one word that’s often been used to describe the secretive organization: ‘whistle-blower’.” — Yahoo News

“The venture, now rolling out across the web with hundreds of thousands of popular titles for sale and millions more free, will compete for a slice of the digital books business, which is valued at close to $US1 billion and is expected to grow in the coming years.” — The Australian

“As a result of our current legal situation, we have no choice but to wind down LimeWire Store operations,” the company said in a statement on Friday. “Despite our dedication and efforts, 31 December 2010 will mark the day when LimeWire Store shuts its virtual doors.” — The Guardian

Online privacy not such a great idea for advertising

“If the vast majority of online users chose not to have their internet activity tracked, the proposed ‘do not track’ system could have a severe effect on the industry, some experts say.” — The New York Times

Julia Gillard to star with Oprah

“As the first of Oprah Winfrey’s audience members touched down in Sydney this morning, it was revealed that the Prime Minister, Julia Gillard, will also appear on the show.” — The Age