It is clearly hard to get out of that election mode when posturing about tough on law and order is seen by politicians as a pre-requisite for success.

It’s OK, Ted, the election’s over. It is clearly hard to get out of that election mode when posturing about tough on law and order is seen by politicians as a pre-requisite for success. Victorian Premier Ted Baillieu succumbed to the invitation yesterday to add some meat to the tabloid Herald Sun report of an assault on an elderly man.

Now I’m not suggesting that there is any reason not to be angered by this ugly attack on a 91-year-old grandfather in his own home. It’s just that there’s no evidence I have seen that the tougher penalties Premier Baillieu has again promised will actually make such events less likely in the future.

The campaign against drink driving goes high tech. In Queensland from today convicted drink drivers will have to have alcohol interlocks fitted to their cars when they get their licences back. They will not be able to start their car unless they pass a breath test. I wonder how long it will be before the devices become compulsory for all drivers all the time?

With a friend like Kevin … Just a little reminder this morning of the impeccable political judgement of Herald Sun blogger Andrew Bolt: 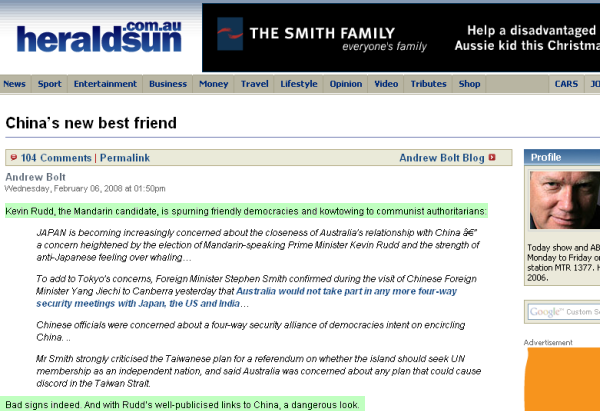 From a report this morning on the Herald Sun website

On China, Mrs Clinton sought Mr Rudd’s advice about the challenges posed by China’s economic rise, asking him “how do you deal toughly with your banker?”

Mr Rudd described himself as “a brutal realist on China” and argued strongly for the need to integrate China into the international community and allow it to demonstrate greater responsibility “all while also preparing to deploy force if everything goes wrong”.

He told Mrs Clinton Australia was building up its navy in response to China’s growing ability to project force.

Mr Rudd, now Foreign Affairs Minister, was quoted as saying China’s reactions on Taiwan “were sub-rational and deeply emotional” while on Tibet its hard-line policies “were crafted to send clear messages to other ethnic minorities”.

No change expected. The Reserve Bank has taken the market a little bit by surprise over the past couple of months with no rise when one was expected and then one when it was not. Undaunted, the wagering goes on and tomorrow it will be a really big upset if the official rate is changed. 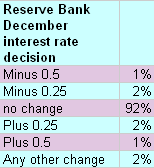 Testing the ability of teachers. Julia Gillard clearly has a fascination with United States efforts to evaluate the efficacy of teaching. The My School website she launched just under a year ago, based on an idea from New York, is evidence of that. And as the Prime Minister searches for ways to reinforce educational reform as a strong suit for Labor, it will surely not be long before we have ratings for teachers to accompany those for schools.

The New York Times at the weekend had a lengthy story on how Microsoft’s Bill Gates, who in recent years has turned his attention and considerable fortune to improving American education, is investing $335 million through his foundation to overhaul the personnel departments of several big school systems. A big chunk of that money is financing research by dozens of social scientists and thousands of teachers to develop a better system for evaluating classroom instruction. “The effort will have enormous consequences,” said the story, “for the movement to hold schools and educators more accountable for student achievement.”

Twenty states are overhauling their teacher-evaluation systems, partly to fulfill plans set in motion by a $4 billion federal grant competition, and they are eagerly awaiting the research results.

For teachers, the findings could mean more scrutiny. But they may also provide more specific guidance about what is expected of the teachers in the classroom if new experiments with other measures are adopted — including tests that gauge teachers’ mastery of their subjects, surveys that ask students about the learning environments in their classes and digital videos of teachers’ lessons, scored by experts.

The website of the Bill and Melinda Gates Foundation gives some details of how the system is being tested in the Memphis School System. 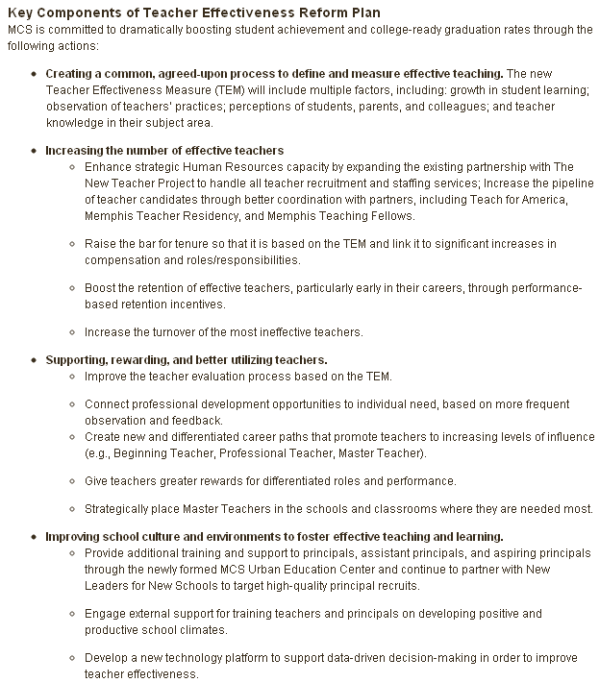 Ye gods. How about a movement to hold students more accountable for student achievement?