Fairfax Media's ailing band of Melbourne suburban mastheads has a new mascot -- Wilbur Weekly -- a hulking promotional dog that attends community events to spruik the stable's offerings and hand out stickers to children. Plus, other media news tid bits.

Fairfax slave dog suits up — no joke. Fairfax Media’s ailing band of Melbourne suburban mastheads has a new mascot — Wilbur Weekly — a hulking promotional dog that attends community events to spruik the stable’s offerings and hand out stickers to children. The canine, designed by in-house cartoonist Matt Golding, seems like a cute way to stave off circulation declines following the massive revenue hole ripped in the network by premium competitor The Weekly Review. 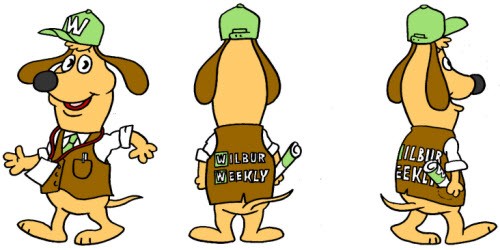 But staff were sent reeling recently when FCN marketing manager Allan Brodie sent around the following email offering hacks the opportunity to climb into the Wilbur suit to assist with his propaganda effort. The main problem being the sweaty work is completely unpaid. Writes Brodie:

As we move into 2011 and we now realise the potential of Wilbur, I am looking at volunteers that would be prepared to don the suit. There are some critical issues that must be addressed before you decide to put your name down.

I know this may seem like a joke, but I can assure you it isn’t.

Linda Grinter, from the Media Entertainment and Arts Alliance, told Crikey she was “concerned about asking staff to work for free, whether it’s in a dog suit or not”. But Brodie was unrepentant, claiming that climbing into Wilbur for nix was a “great idea” and that he did it regularly. “It gives staff the opportunity to give up their own time for charity,” he said. — Andrew Crook

Howes’ gay marriage advocacy confused. Union kingmaker Paul Howes took to the Sunday tabloids yesterday to back the cause for gay marriage. While he acknowledged it wasn’t “the most burning issue around”, he outlined a colourful case for Labor to act now:

I am personally opposed to gay marriage and therefore I have decided that I am going to stay in my heteros-xual marriage.

And that’s my advice to all those people who are up in arms about the issue. If you don’t like gay marriage: don’t marry a gay person.

The Sunday Telegraph in Sydney appropriately headlined the piece: “Easy fix to stop marital discrimination”. So did the sub down south at the Sunday Herald Sun bother to read it? Or did Howes’ call not fit with the paper’s stance? 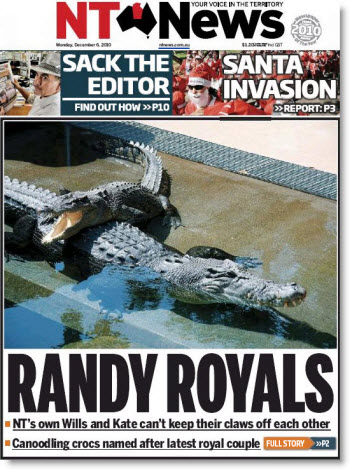 “American pressure to dissuade companies in the US from supporting the WikiLeaks website has led to an online backlash in which individuals are redirecting parts of their own sites to its Swedish internet host.” — The Guardian

“Google’s regional director of content partnerships, Gautam Anand, said the software, which has launched with a handful of manufacturers in the US, would be more widely available for development ‘some time next year’.” — The Australian

The rise and rise of the UK’s Mail Online

“According to the research firm comScore, more than 32 million people flock to the British newspaper’s site every month for the latest on Ms Cole, as well as news of narrower interest. Its growth curve has been remarkable: Created only two years ago, Mail Online now has the second-largest Web audience of any paper in the world, behind only Nytimes.com, the combined site of The New York Times and the International Herald Tribune.” — The New York Times

Teenagers want to write, too

“Figment.com will be unveiled on Monday as an experiment in online literature, a free platform for young people to read and write fiction, both on their computers and on their cellphones. Users are invited to write novels, short stories and poems, collaborate with other writers and give and receive feedback on the work posted on the site.” — The New York Times