Has WikiLeaks changed everything?

Crikey reader have their say.

Niall Clugston writes: Re. “Like MP3s, WikiLeaks will change govt — so why has everyone missed the point?” (Friday, item 1). Bernard Keane’s claim that new media as typified by WikiLeaks “doesn’t just change relationships within existing systems, it changes the systems themselves, fundamentally” is over the top.

Ironically, it is newspapers, like The Guardian, that are breaking the stories. The WikiLeaks website couldn’t handle the traffic. At the time of writing it’s offline.

The argument that governments can’t control the Internet is dubious. If the Chinese government can unleash cyberwarfare, so much the more can the US.  Let’s not forget that cyberspace isn’t real. It’s CGI, and the computers generating it are, at source, the Pentagon. The US government could switch it off if it really wanted to.

The fact is that the media has resisted government censorship for the past 40 years. It’s about politics, not technology, though computers do make stealing information easier. Even conservative news outlets are reporting the WikiLeaks revelations. That’s a political problem.

Paul Hampton-Smith writes: The latest WikiLeaks releases have many supporters, with people from free speech supporters through to Trotskyites punching the air. I don’t know what label I would give myself, but I’m punching with the best of them.

Why not?  They would certainly uncover innumerable personal lies.

After the angst, would we emerge as more honest, or more circumspect, individuals? I strongly suspect the latter.

And likewise, I think, with these WikiLeaks releases. Yes, “the world has changed”, but only in the direction of ensuring that the naked truth will in future be better hidden.

John McCombe writes: Re. “Rundle: WikiLeaks … diplomacy out the door and instead, talk of execution” (2 December, item 2). The forecast of the demise of WikiLeaks within the next year by Guy Rundle needs some reflection. I recall Frank Hardy saying, through one of his mock characters, that the world was made up of lurk merchants and lurk detectors.

The originator of the leaks was not Julian Assange’s crowd but a member of the US military. This is the same military that spawned hundreds of internal anti-war media outlets (underground newspapers, newsletters etc) during the Vietnam war. We would need to believe that there are no other US officials disgusted with deceit and war crimes to believe that there will be no more leaks.

As for WikiLeaks, sure it may be possible to be closed down, but the hackers who started it, or those who admire it, will learn from that. Just as computer hackers and performance enhancing drugs are usually at least one step ahead, my money is on the lurk merchants.

Glen Frost writes: Re. “Church campaign gets a win: ANZ turns its back on cluster bombs” (Friday, item 3). Banks love saying they’re not directly lending to the merchants of death (an ever increasing client group it seems).

Luckily for the bankers, there’s always syndicated loans (and similar banking instruments), conveniently arranged by another bank, broker or even a finance company of the company borrowing the money, to which a bank could add funds as one of a group of investors, thus ensuring that a bank is not directly financing said merchant of death.

But as a co-investor in a syndicated loan, the bank still get the share of the profit.

Andrew Dempster writes: Re. “Australia never stood a chance in FIFA’s back scratching world” (Friday, item 15). Here’s a screen grab of an analysis of the number of votes FIFA gave in its first round of voting against Transparency International’s Corruption Perceptions Index. 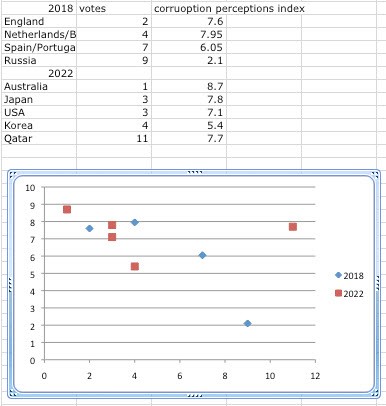 A high score means low corruption. England is given the UK’s score and where two countries are involved, the average is given. Note (except for the Qatar vote) the very strong correlation between the level of corruption and the FIFA vote. If FIFA is not corrupt, they sure like their corrupt countries!

John Fenton writes: Re. Gavin Moodie (Friday, comments). In the newspaper I read here in Austria, and I think it is more general elsewhere in German, the generic “American” that Gavin Moodie complains about is qualified in the case of people from the US: one reads that somebody is a “US American”. I think it is quite nice.

Another sophistication in German is that the United States is a plural rather than a singular noun — for example, and translating again: “the US have always …”, and so on. Then again, in German “Die Polizei” is a singular noun … “the police has/is …” never sounds quite right to me.

Simon Dodshon writes: I fully agree with Gavin Moodie’s letter referring to the incorrect use of the term “America” when actually referring to “North America”. But Gavin, you have to break it down even more, you forgot Central America, those seven countries between the North and the South!

David Moncrieff writes: Re. “Daily Proposition: get some manners, young whippersnappers” (29 November, item 22). This maybe too long after the event but while I agree with most of Michael Vaughan’s sentiment about footpath manners I can’t agree with the always on the left of a woman edict.

My grandmother, may she rest in peace, was a stickler for an escorting male to walk on the outside, that is, the streetside, of a lady companion. I presume this is based on the principle of protecting her from inadvertent showers as passing carriages splashed through the potholes and puddles!

WikiLeaks and the evil that is PayPal

The tangled web that is WikiLeaks

Did not the man always walk on the right hand side of the lady in order that his sword arm was free?

Second thoughts… or was it so that his right hand was free, in case he had to lift his hat in recognition of another friend or a social better passing by? It wouldn’t do to have to first release his grip on the gloved hand of his lady, neither would it do for the social nicety to be delayed due to the time taken so to do.

when did i saywikileaks would fold in a year?

The United States was a plural noun last time I was in the UK.

In sport the UK broadcaster will say “England have…….etc.” rather than the “England has….” of their Australian counterparts. I think it’s the suggestion of the “team” as a group of people rather than a singular “country”.