If McClelland thinks there is a debate to be had over media handling of national security information, he should throw it open to the media most likely to offer the sort of coverage he appears concerned about.

Last week the Attorney-General wrote to “commercial media peak bodies like the Australian Press Council” asking for their help to put together voluntary arrangements that “would apply to the publication of sensitive national security and law enforcement matters, where inadvertent or pre-emptive reporting could endanger the life and safety of personnel or the public or could compromise that investigation or operation”.

The arrangements “would not aim to hinder publication or suppress the publication of news” but “facilitate such reporting in a manner that avoids risk to life or safety or compromise of important investigations or operations”.

Robert McClelland’s letter referred to coverage of anti-terrorism raids in Melbourne in August 2009 but the timing reveals the true intent: to establish a protocol for reporting on material emerging from WikiLeaks’s diplomatic cables. Indeed, McClelland himself made the link clear last week when he said that a “discussion might need to take place” between national security and law enforcement authorities and the media about publishing WikiLeaks material. 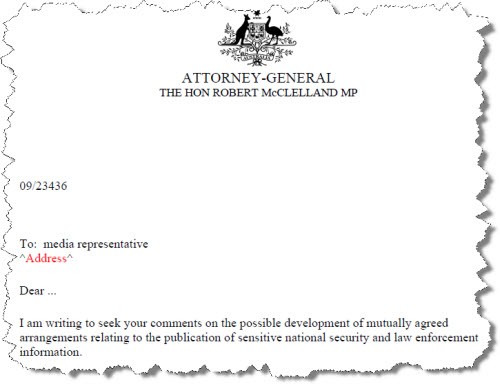 The peculiarity of McClelland’s letter is that it is aimed at the exact sector of the media that, on current form, is least likely to provide detailed coverage of the WikiLeaks material. Outside the ABC, the Australian mainstream media’s coverage of the WikiLeaks material has been threadbare, focused on trivia and lacking in analytical substance (and a refusal to link to external sources for the cables themselves). For comprehensive coverage and quality analysis, Australian readers have had to head to overseas websites like The New York Times and The Guardian, or read the work of bloggers with foreign policy expertise or an understanding of new media.

McClelland’s letter is like a message from the mid-20th century, when politicians, journalists and editors formed a cosy club that agreed what was in the public interest and what wasn’t. That it has been inspired by WikiLeaks, a purely online outlet, makes it all the more absurd. If McClelland thinks there is a debate to be had over media handling of national security information, he should throw it open to the media most likely to offer the sort of coverage he appears concerned about.

It’s true that the ABC appears to have been licking its collective chops (TV news and radio statewide) over the Kevin Rudd conversation with Hillary Clinton.

The saddest thing about Australian Labor in the last 25 years is in its craven servility to US interests. With the exception of latham who was not prepared to be a lap dog , all the others have been completely pro American, with no questioning at all of US actions. I have seen both Beazley and Rudd give talks at Fabian Society functions where they were both unashamed in their total support for the US. The feudal manner in which US ruling class runs its society should be anathema to Labor, but is clearly not. It is in this context that McClelland and Gillard are to be condemned for their servile attitude. What craven as-licking cowards they are.

Bring back the D Notice! 😉

Why does Labor make it increasingly difficult, at each election, for a Labor supporter to vote for their party? I feel shame on behalf of our current Labor government for their sycophantic behaviour towards America. I also feel a justifiable sense of fear and paranoia, as an Australian citizen, given the government’s failure to defend one of our own, e.g., Julian Assange: the whole business is acting as a salutary example for anyone who would dare to question or cross the current undemocratic power structure at the top of which is the United States.