In today's Media Briefs, Leigh Sales and Chris Uhlmann are confirmed as co-hosts for The 7:30 Report, Four Corners is set to turn 50 in 2011, The Daily Tele gets its knuckles wrapped, Robert Pattinson is a vampire pillow-biter and more....

Told yas: Sales and Uhlmann at 7.30. Leigh Sales and Chris Uhlmann will co-host the ABC’s 7.30pm current affairs flagship next year. But then, we told you that a fortnight ago. Aunty confirmed the double-header move this morning to replace Kerry O’Brien: Sales will anchor from Sydney; Uhlmann as political editor will present from Canberrra “when the news demands it”.

As we reported, the popular view at Ultimo — backed by focus group testing — was that Sales, who actively lobbied for the role, would complement Uhlmann’s harder political head on the program.

But the 7.30 Report moniker is dead — it’s just 7.30 now, part of a “new focus” for the 25-year-old program. The name unites the program with Stateline: 7.30 will air each weeknight, with at least the Friday program reverting to state-based presenters. ABC News director Kate Torney says: “By combining the resources of all the existing program teams, there will be increased opportunities for each state to provide its own local edition of 7.30 on other nights when the news agenda demands it. We can and will break out of national programming to cover major state-based stories, using national resources.”

Drama, news for Aunty in ’11. Unlike the lightweight offerings from Nine, the ABC has actually got a season in 2011 that we can look forward to. It will be one with a bit more interest and oomph for viewers — and it has current affairs programs that are genuinely respected, not imitated and glossed over as Nine and Seven do.

Four Corners turns 50 in 2011, Australian Story and Stateline 15, Insiders 10 and the 7.30 Report a quarter-century. Interestingly, ABC1’s early morning kids programs get shunted to ABC2 from 6am to 9am and the three-hour ABC News Breakfast moves from ABC2 to the main channel (and continue to be simulcast on News 24). Virginia Trioli returns to the big time, at last. That will provide a head-to-head battle for Today on Nine, Sunrise on Seven and Ten’s 6am early news and will become the most competitive news timeslot in the day, even though the attention will be on the 6pm to 7pm battle kicked off by Ten in mid-January.

Just how long that will last remains a function of the newest TV show coming on Australian TV in 2011. Called Four Billionaires In A Boardroom, it’s about how four modest but very rich people with stars in their eyes try to give Australia their vision for a commercial TV network. Seeing the ABC has managed to get Asher Keddie to play Ita Buttrose and Rob Carlton to play Kerry Packer next year in Paper Giants (the story of the birth of Cleo magazine), finding four leading actor/comedians to play James Packer, Gina Rinehart, Bruce Gordon and Lachie Murdoch should be very easy. This particular series will raise the idea (it has already, from what I hear) of a series based on the Paul Barry book about Kerry Packer. James Packer is sure to give it a lot of pre-publicity by opposing the idea.

Top of the pops at the ABC in 2011 is the return of Chris Lilley and his new 12-part series Angry Boys, a co-pro with the BBC and HBO of the US. The ABC gets first crack; it goes to air from the week before the Logies next May and Lilley is already slated to sing a song at TV’s night-of-nighs on May 1. (Online voting for the Logies actually starts this Monday for the most popular categories — due to a continuing fall in sales, voting will not be via the various editions of TV Week but online for 12 weeks.)

Marieke Hardy has already finished a six-part series called Laid that starts early in the 2011, Spicks and Specks is already shooting for the 2011 series and Adam Hill’s new program (tipped on Crikey a month ago) is called In Gordon Street Tonight (the location of the old ABC studios at Elsternwick in Melbourne). Crownies is a 22-part long-form drama (oh, the ABC is back in drama in 2011 with 32 hours already slotted in). And they’re talking about a second series of Rake.

Fred Schepisi is doing a film called The Eye of The Storm with Judy Davis and Geoffrey Rush. And the ABC is going to attempt to turn Kerry Geenwood’s arch detective Phryne Fisher into a series of the same name. Great reads, but a big challenge and another period drama because the books are set in Melbourne of the 20s and 30s. (Nine’s Underbelly is a period piece as well in 2011 — The Razor Wars takes place 80 years ago.) Also watch out for The Slap, Redfern Now, The Straits, Top of The Lake (a Jane Campion production in NZ, involving the ABC and BBC) and a new Judith Lucy vehicle. — Glenn Dyer

Tele knuckles rapped. News Limited subsidiary Nationwide News has been censured by the Australian Bureua of Circulations today for breaching publicity rules, after the Daily Telegraph failed to take in account all sales when bragging about a lead over rival the Sydney Morning Herald.

Last month, News Limited issued a press release declaring the Saturday edition of the Tele was outselling the Herald for the first time. They even ran a page two banner bragging about the win:

At the time their crosstown rival didn’t take to kindly to the boast. Fairfax said it was a case of “creative counting” and that the Saturday Tele only beat them when sales from “bundled, event, education, accommodation and airlines distribution” were excluded, sales the Tele included when promoting their weekday lead.

Their efforts have also earnt the wrath of the ABC, with a retraction required in the form of a media release and article published in the Daily Telegraph to correct the misinformation. In a statement the ABC said they would “defend the integrity of their rules at all costs”. — Tom Cowie

Did Tony Martin make Karl a robot? Yesterday, we speculated that nasty network rivals had hacked Channel Nine’s Wikipedia page to insinuate (not wrongly, as far as we know) that Karl Stefanovic is a robot. An update now from Crikey reader Sean Dwyer:

“I’m probably not the first and no doubt not the last to let you know that sadly this Wikipedia vandalism isn’t a cunning plan by a rival network, but an ongoing prank by the admirers of the much-loved and missed Get This radio show, which not only made the claim that Karl is indeed a robot but applauded Wikipedia vandalism to that end. Get This was responsible for a great many memes, as Andrew Bolt’s blog recently discovered.”

The vampire pillow-biter? “Is it just me who is amazed that the highlighted line made it into a published article?” asks Crikey reader Philip Price. “I may hate all things Twilight, but calling Robert Pattinson a pillow-biter is probably going slightly further than they should… 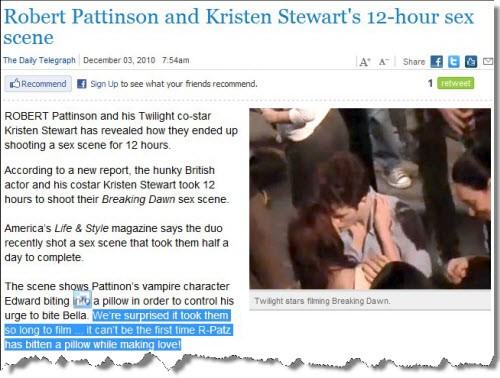 “Rupert Murdoch’s News Corporation submitted a potential remedy to the European Commission in an effort to smooth over concerns raised by its proposed £12bn takeover of BSkyB, it emerged today.” — The Guardian

Foursquare checks in to television

“Foursquare, a popular startup that lets people share their location with friends through a mobile app, is working with production company Endemol USA to create a television series.” — Huffington Post

Breaking up with Hotmail (not that hard to do)

“What attracted me to Hotmail? Well, she was free, and she wasn’t Outlook. And she liked to go places! Like any whore, Outlook was pretty demanding, stipulating where and when we could connect. When not at the office, I could only see her via VPN and later, when she became obsessed with the danger of catching some virus from me, we could only hook up if I had a valid smartcard plugged into my USB to act as a prophylactic. Hotmail didn’t care about that shit. Anytime from any computer was good enough for her.” — Slate

Rihanna top of the pops on social media

“Billboard has unveiled a new chart, the Social 50, that ranks artist popularity on social media. To calculate the 50 most popular artists each week, Billboard uses the number of weekly additions or subtractions in followers, as well as page views and song plays on artist pages on Facebook, MySpace, Twitter, iLike, and YouTube.” — cnet

Uhlmann and Sales, how predictable. For some time I’ve avoided Lateline on the nights Tony Jones isn’t hosting, now it looks like the 7.30 programme needs to be dodged, too. I’ll relish the last days of Kerry in the 7.30 timeslot – hell, I’m missing him already.

I’m excited at another offering from the very talented Chris Lilley. If its half as good as SHH it’ll be a winner.

@ ZUT ALORS – I’m with you – another 30 minutes of the day I’ll save. Not given to wasting my time listening to airheads. That woman is a picture of naked ambition. Should have been Tony Jones there with his intelligence, knowledge of politics and maturity. Or at least someone who knows what they are talking about.
Í’ve got news for you Leigh – you will never, ever be even a pale imitation of Maxine McKew. One can only assume that the news director who appointed you doesn’t know what she is doing either. The place must be full of female fruitloops at present!!

But she does do a good “Tracey Grimshaw” : “Tim Tam Mr Abbott? Rat poison Ms Gillard?”

Two words on the way ABC is going with “news standards”/aping “Limited News” :- “Maurie Newman” (of the “Alfred E” and “Cant do” family tree?)?