Qatar, their Cup runneth over

I’ve been living in the state of Qatar for about a month and in that time it’s been impossible to escape the build-up to FIFA’s announcement of the host of the 2022 World Cup. Almost every scrap of public space in Doha is plastered with bid logos and it has been a frequent topic of conversation in many settings. In my experience, people have mostly been optimistic and confident but preparing themselves for the worst.

Last night I headed down to Souq Waqif — the Federation Square of Doha, if you will — where a carpark had been transformed into a live event area complete with super-sized TV screen and stage.

About five thousand people gathered comfortably in front of the telly, wearing Qatar 2022 jerseys and blowing purple vuvuzelas that had been handed out by smiling volunteers all afternoon around the city. Not surprisingly given the number of ex-pats residing in Doha, the ratio of locals to foreigners in the crowd was about 50-50. The mood was upbeat combined with a palpable sense of tension.

Qatar sold FIFA a vision of a World Cup that would represent the entire Middle East, not just a tiny pimple of land hanging off the top of the Arabian peninsula. And in among the sea of purple-and-white Qatari flags held aloft at Souq Waqif were Saudi, Kuwaiti, Lebanese and Iraqi flags, suggesting that the bid team might’ve had a point.

The Al Jazeera Sport broadcast on the big screen was in Arabic so us Westerners in the crowd had to make do with trying to interpret the pictures. Just before Sepp Blatter hit the stage, a world map graphic was displayed with the bid countries highlighted, a large red X slapped over the top of the Australian continent.

“Does that mean Oz is out?” I asked my friend, just as the Arabic speakers in the crowd gave a loud cheer.

In time, Russia got pulled out of an envelope but nobody in the souq cared; everyone was waiting impatiently for Blatter to stop fiddling with the podium microphones and announce the 2022 winner. Meanwhile, us English speakers were just glad that we were going to get a visual answer without having to wait for an English translation of the Arabic translation of Blatter’s English. 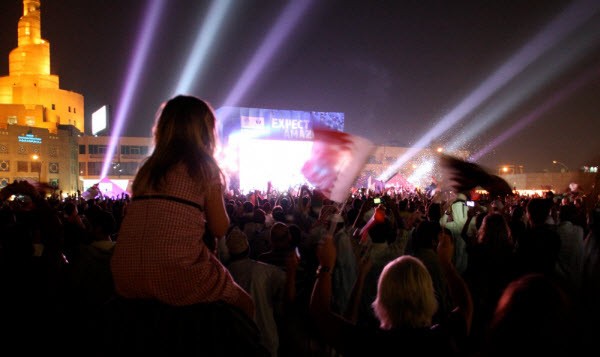 After the buzz died down a bit, we headed into a nearby shisha cafe to drink some tea and watch constant replays of the winning moment and slow-mo crowd reaction shots on Qatar TV, as projected badly onto one of the cafe’s wall. There were a lot of locals in the cafe and each time their country was re-pulled out of the envelope they cheered and punched the air once more. One shot played repeatedly in the coverage showed a Qatari man breaking down and crying before being comforted by another sobbing man.

Doha’s souq may have belonged to people from all over the world but the streets belonged to Qataris. At about 11pm, some five hours after the announcement, I headed to the Corniche, which runs around the horseshoe-shaped bay on which Doha is built. The entire six-kilometre length of the wide Corniche road was a slowly-moving mass of vehicles sporting flags, side panels painted with slogans, and car-surfing young men. Horns were blaring, cans of silly string were being sprayed from windows, and the air was thick with the smell of burning rubber and clutch. Car passengers and roadside spectators blew their cheap, disposable, overused vuvuzelas that had started to sound more like camels than buzzing insects. 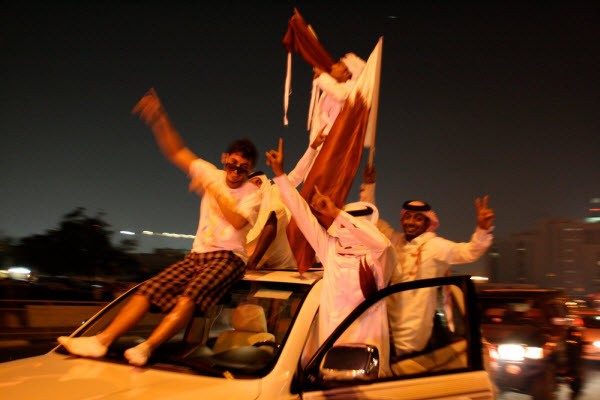 As I neared home, I passed some of the many dozens of construction sites in the city centre. Despite the late hour on a Thursday night (the Islamic world’s equivalent of a Saturday night) cranes were in motion and floodlights illuminated work areas. Qataris (and an army of cheap labour from Asia) have built in barely a decade a crop of skyscrapers that outclass the Sydney CBD, and an effort at least as huge is going to be required to deliver the World Cup in 2022. Nobody can realistically doubt this country’s ability to deliver.

Last night’s win was not just a triumph for a tiny nation in the process of reinventing itself, it was also felt by many to be the coming of age for an entire region of the world.

Where are all the celebrating Qatari women? Oh, wait, I forgot.

Let’s not pretend that last nights win was a triumph for a tiny nation in the process of reinventing itself or a coming of age story. It was quite plainly the ability of wealthy oil rich men to bribe FIFA officals.

Heartfelt congratulations to Qatar, I could not be happier with the result.

Was it all fair dinkum? I thought it was all just some “Lowy Benefit Concert”! Besides how were we going to make up those crowds – move the detention centres to the stadiums?
On the bright side, besides all that oil there’s all that “luvaly money” – and look what it did to South Africa – aren’t they dismantling a few of their specially built and funded white elephants.

Just remember when “Ziggy played Qatar, jamming good with Arbib and Gilly…..” – what happened to him.

I agree that the Middle East doesn’t have the human rights that most OECD countries take for granted, but neither does Russia, nor does China (olympics), nor indeed do most of the rest of the world. However, Qatar has invited engagement and it seems churlish not to reciprocate. Maybe they’ll liberalise a bit, and maybe even we will understand a bit more as a result.

I would be interested in another letter anticipating what might be the experience of world cup spectators. There were some Australian sore losers on ABC’s radio this morning claiming it would be dreadful for fans – very bloody hot, no booze, etc.