Australian television has long proved to be a wasteland for late night chat shows but that doesn't seem to faze SBS, who are set to launch a new six-part late night talk show in the new year fronted by Melbourne academic Waleed Aly. Also Karl the 'robot' Stefanovic and the trolls are breeding online.

Late night with Waleed. Australian television has long proved to be a wasteland for late night chat shows — think The Night Cap, Micallef Tonight, Greeks On The Roof just to name a few — but that doesn’t seem to faze SBS, who are set to launch a new six-part late night talk show in the new year fronted by Melbourne academic Waleed Aly.

According to SBS, each 60 minute episode of The Late Session will be prerecorded and will feature five guests in a dinner party-style format, who will engage in “thought-provoking and entertaining conversation”.

Aly’s media profile has been rising steadily since his work as a former director and spokesperson for the Islamic Council of Victoria. As well as being heir apparent to 774 ABC Melbourne kingpin Jon Faine, he appears regularly as a talking head on Q&A and The Drum and has hosted ABC2 News Breakfast. — Tom Cowie

‘Robot’ Stefanovic. Wikipedia. It’s often the first port of call for those seeking information in a hurry, making it an excellent place to have a crack at your rival. Take Channel Nine’s vandalised page, for instance, which reads suspiciously like it has encountered the hand of someone from a rival network: 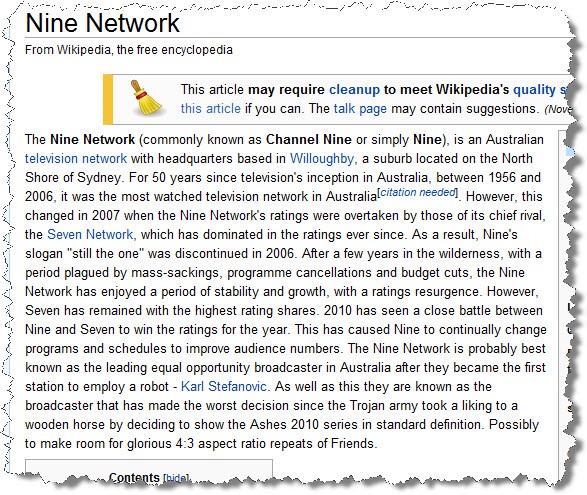 How dodgy was it for The Guardian et al to publish WikiLeaks?

“David Higgerson, the multi-media supremo at Trinity Mirror, asks whether there is any difference between publishing the documents posted by WikiLeaks and publishing stories gleaned from hacking into voicemails. He points out that the WikiLeaks material “was effectively stolen from a government”. So it has been obtained illegally.” — The Guardian

A semi-boring end to the Boring’s Google fight

“Back in April 2008, married couple Aaron and Christine Boring filed suit against Google for “intentional and/or grossly reckless invasion” of their privacy, because a Street View car drove down their Private road and snapped some photos of their house… Now, over two and a half years after the case got started, a judge has handed down her consent judgement, ruling that that Google was indeed guilty of Count II Trespass. The Borings are getting a grand total of $1 for their trouble. Ouch.” — TechCrunch

“Psychological research has proven again and again that anonymity increases unethical behavior. Road rage bubbles up in the relative anonymity of one’s car. And in the online world, which can offer total anonymity, the effect is even more pronounced. People — even ordinary, good people — often change their behavior in radical ways. There’s even a term for it: the online disinhibition effect.” — NY Times

“A recent article by the New York Times related a disturbing story. By treating your customers badly, one merchant told the paper, you can generate complaints and negative reviews that translate to more links to your site; which, in turn, make it more prominent in search engines. The main premise of the article was that being bad on the web can be good for business.” — Google

“Stop whatever you’re doing right now, watch this video, and send it to your friends. Actually, you don’t even have to watch the video — though it’s amazing — you just need to pass it on. Here’s why. The video was put together by a guy named Walter C. May and his roommates… It was posted on YouTube yesterday and has since then been tweeted about by May’s friends, random strangers, and even Katy Perry.

But May’s girlfriend, for whom the video was made, hasn’t seen it yet. That’s because May wanted the video to reach her organically — through tweets, links passed between friends, and blog posts.” — Gizmodo

“A new study released by Telsyte predicts over one million media tablet devices will be sold in Australia in 2011. Telsyte forecasts the media tablet market to grow from $292 million in 2010 to $1.35bn in 2014.” — Media Biznet

“Australia’s TV networks have gone through a day of senior level moves among their sales teams which have seen the departures of Seven’s Melbourne sales boss and new blood for both Nine and Ten in Brisbane.” — Mumbrella

“Amazon has pulled the plug on WikiLeaks, the site that earlier this week began releasing a mammoth collection of confidential U.S. State Department diplomatic cables. “WikiLeaks servers at Amazon ousted,” said WikiLeaks around 3 p.m. Eastern time on its Twitter account. “Free speech the land of the free … fine our $ are now spent to employ people in Europe.”

According to reverse IP traces run by Computerworld, WikiLeaks is now hosted by a Swedish firm, Bahnhof Internet AB, which is headquartered in Uppsala, a city approximately 44 miles north of Stockholm” — Computerworld

Garry from The Dandenongs

I wish we did have creative types at the networks that would take the time to deface each others entries on Wikipedia but not so. Today’s Media Brief on Robot Stefanovic owes its genesis to the now defunct MMM radio show “Get This” Get This which was hosted by Tony Martin and Ed Kavelli ended in late 2007, but during ais two year run they made constant reference to the fact (yes fact as it was quoted on Wikipedia) that Stefanovic is a cyborg. Get This fans made editing Stefanovic’s wiki a daily occurance until someone had the page locked down, from there they looked for creaticve ways to propagate the Robot Stefanovic story, even at one point editing CP3O’s page pointing out the relationship to Stefanovic. It’s an on-going internet play that still gives me a giggle several years after it began.
Here are some links proving the Stefanovic/Cyborg story:

My favourite Stefanovic “fact” is “Karl is actually a Government/PBL Broadcasting-backed T-1000 from the future year of 2097 who has been sent back in time to destroy entertainment.”

It’s disappointing to know Waleed Aly has been snapped up by SBS as I was hoping he was the replacement for Kerry O’Brien on the 7.30 Report.

Waleed will be a success on whichever network he favours.